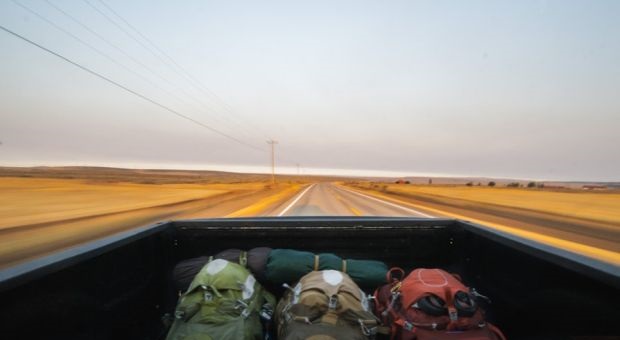 5 Simple Steps For Foolproof Bugging Out

Having a bug out plan is supposed to be a normal part of preparedness. But in reality, many of us lack an adequate bug out plan.

We may have some vague idea of what to do and may even have a bug out bag that’s somewhat packed. But that’s a long way from having a full bug-out plan in place.

But what are we going to do, if we find ourselves caught in a situation where we suddenly have to bug out? Hurricanes, floods, tsunamis, forest fires and a host of other situations can put us in the position of suddenly having to put a non-existent bug out plan into effect. As I look back over the last few years, I see this happening over and over again. The Oroville Dam in California; Hurricane Harvey flooding the Southeast part of Houston, even the tsunami that hit Japan in 2011. In each of these cases, thousands of people suddenly had to evacuate, without being ready.

Granted, you and I are in that small group of people who are supposedly ready. But as I already said, many times we are not. So, if such a thing were to happen in our neighborhood, many of us are going to find ourselves in trouble, as we won’t really be sure what to do.

Ok, so what should we do if that happens? Let’s walk through this and see how we could handle an emergency evacuation, whether ordered by the government or just because we see the need ourselves.

Click here to discover how our ancestors survived during harsh times!

The first thing to do is stop and think. Unless you’re in a situation where a flood hits as you’re on your way home from work, you’re going to have a few minutes to prepare. So be sure to make good use of that time. There are five key things you need to do in those few minutes:

No matter what, you’re going to need to get out and on the road as quickly as possible. So it may seem like taking a few minutes out to do those things is a waste of time. But by organizing yourself and making a quick plan, you will accomplish more in less time, putting you on the road quicker; and that’s the name of the game. Shoot for getting on the road in an hour, faster if possible.

I remember reading about the mass exodus from Oroville, California, with people grabbing whatever they could and filling their cars. While I’m sure a certain percentage of the things that people grabbed were useful from a survival viewpoint, I’m also certain that the percentage of survival related items was extremely low. Most people grabbed what was important to them, regardless of value, importance in a survival situation or even importance in rebuilding their lives, should they lose everything.

Any such evacuation is a survival situation. Therefore, what you take has to start with the things you’ll need to have, in order to survive. After that, you need to consider the things you would use to rebuild your life, and then finally, things that are valuable to you for other reasons, such as sentimental value.

Getting this right is the biggest reason why you need to take that few minutes to get organized. Otherwise, all you’re going to do is grab whatever you see that is important to you. While your guitar collection or vinyl record collection might have a huge sentimental value to you, those things aren’t going to be able to do anything to ensure your survival as you bug out from home.

So, let’s start out with things you should grab for survival:

Don’t forget to fill your car’s gas tank and any gas cans you have, before you go. Buying gas on the road may be a problem. One driver needs to take care of that responsibility as their first action, while the rest of the family is gathering the things on that list. It might take a while, especially if a lot of other people are bugging out at the same time.

Basically, the things in this list are the things you would find in any bug out bag. However, you’ll probably end up with more volume and weight than you can fit in a backpack. That’s okay; you’re doing a “grab and go” not building a carefully planned out survival bag.

That will probably pretty much fill your car; but just in case you have any room left over, let’s think a little farther down the road. At some point in time, you will hopefully be able to return to your home or you will be reestablishing your life elsewhere. When that time comes, there will be other things you will need to have, especially legal and financial documents:

Finally, only if you have time and space left over, you can think about adding items of special sentimental value. I realize this might seem cruel to some of your family members, but if this is truly a survival situation, filling your car with such valuables could cost family members their lives.

That wouldn’t be the first time something like that has happened. Sadly, there are instances throughout history in which people have died in an attempt to secure items that they felt were too valuable to leave behind. But the added difficulty of traveling with those items was severe enough to seal their doom. More than anything, that happened because they put those items before what they needed to have in order to survive.

Granted, you probably won’t have the space for these items, unless they are very small. I mostly mention them so as to put them in their proper place in the priority list. If you do end up taking anything that falls into this category, it needs to be with the realization that such items will be the first things abandoned, should you need to lighten your load.

If You’re Bugging Out By Boat

The list above has been written under the assumption that you will be leaving in a large family car. However, if you don’t leave in a timely manner, that might not happen. During Hurricane Harvey, tens of thousands of people were stranded in their homes, awaiting rescue by boat. Rescuers picking those people up, limited them to one suitcase per person. That totally blows away the idea of doing more than a basic bug out bag or a suitcase of clothes and other critical items.

Now that you’ve filled your vehicle with gasoline, people and stuff, it’s time to hit the road. For most of the situations I mentioned in the beginning of this article, your primary goal is to get as far from the potential danger as possible. So you’ll want to travel in a straight-line direction, away from danger. Just be sure that your straight line isn’t the path that the storm is following (assuming the problem is caused by a storm).

The interstate highways will most likely turn into traffic jams during any mass evacuation. When Hurricane Rita was heading for Houston in 2005, the mayor ordered an evacuation of the city. The result of that was a 100 mile long traffic jam, which lasted for over 20 hours, as people tried to comply with that order. Over 100 people died in that exodus.

Our highway system just wasn’t designed to accommodate millions of people evacuating a major city. Hence, the gridlock that Hurricane Rita caused. While there is no way of knowing for sure, you would probably be better off traveling on secondary highways, than trying to use the interstates. Those will probably be filled with people too; but chances are that they won’t be as overburdened as the interstate highways are.

Obviously, you’re going to need to stop somewhere, once you get far enough outside of town to make that option feasible. How quickly you will reach that point will depend in part on the severity of the disaster you are escaping, partially on how many towns and cities are along the way, and partially on whether you are riding the bow wave of the exodus or if you are at the trail end. In the Florida evacuation of 2017, people had to go as far as Northern Georgia and Alabama to find a place to stop.

Since we are assuming an unplanned bug out, you obviously won’t have a set destination, with a prepared survival retreat that you are traveling to get to. While you may have an actual destination in mind, that destination may not be available, once you get there. So you will need to keep an open mind about your ultimate destination, ready to take advantage of whatever opportunity presents itself to you.

There are a number of different options that you might be able to utilize, depending on where you are and what is available. Let’s take a look at a few:

Keep in mind that you can usually outrun the mass of people who are trying to evacuate by the simple expediency of traveling farther than the rest of them. The nearest towns will fill up the fastest, with many more people stopping in, even after every room is full. But if you can travel past where everyone else is stopping, you will be able to find plenty of supplies and hotels that haven’t jacked up their prices.

In most cases, you will be able to return home within days of a bug out caused by a natural disaster. That is, you will be able to as long as your home is still there to return to. Some disaster scenarios are serious enough that homes and businesses cease to exist, such as happened in the Japan tsunami of 2011. But in other cases, the worst that will happen is that your home will suffer reparable damage, as happened to thousands of homes during Hurricane Harvey.

Regardless of what happens, don’t expect to arrive back home to find everything just as you left it. Many people didn’t even bother returning to New Orleans after Hurricane Katrina; due to the severe damage. If you do return, you will likely find that you have to clean out your home and rebuild it, replacing much of what you owned. But then, that’s why we have insurance.