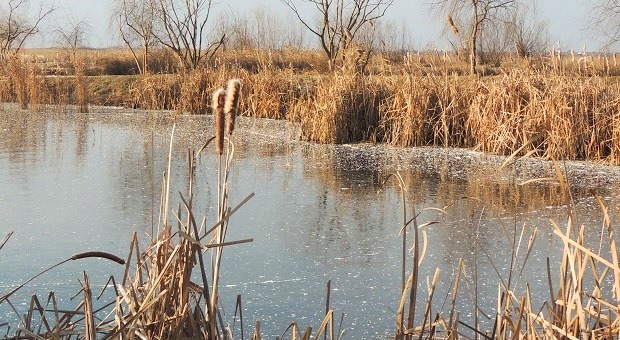 Recently, we’ve been asked a question about what types of foods are good sources of carbohydrates in the winter.

The reader was specifically worried about his son, who is going on a military survival retreat in Maine and can’t afford to lose the 20 pounds that the program has warned him that he will likely lose. His question was about sources of carbohydrates.

My son will be sent to Maine in the winter for a 3 week military survival course. Others who have experienced this say that the participants will lose an average of 20 pounds during that time. He can ill afford to lose 20 pounds, so I was wondering if you knew a good source for carbs that can be found in abundance in the winter? I think he is fairly good at locating small game for protein. Any suggestions will be greatly appreciated!
Best regards,

Though there are many great wild sources of carbohydrates to eat in Maine, I’ve had a problem finding exact nutritional values of wild plants. Go figure. Since the main goal is preventing weight loss, we’re looking for plants that can be found in a great enough quantity to thrive, versus simply survive.

Therefore, we need plants that are both high in calories and found in enough quantity to make a substantial meal. The first part was easy, the second part, not so much. So, I’ll share what I’ve found.

It turns out that these plants are considered a pest by many because they grow so prolifically in marshy areas and around ponds.

Fortunately for somebody foraging, cattails are a great source of carbohydrates and nutrients year-round. In the winter time, the best parts of the plant to eat are the rhizomes, or roots, and the corms, the little shoots that are the beginnings of next year’s plants.

You probably won’t be able to just rip the cattail out of the mud; you’re likely going to have to dig for it a bit. Just run your hand down the stalk of the cattail and into the mud. Feel for the roots, then follow them down a bit and PULL!

Don’t stop with just one plant; grab several at a time because they’re not that heavy and you can carry them or store them in camp. No need to get wet more than once if you don’t have to.

Now, you’re going to notice little shoots around the base of the plant, which are older corms and are the beginnings of next year’s plant.

You’ll also find little pod-like pieces on the rhizomes and around the bottom of the stalks. These are less mature corms and are also edible. You can eat both types of corms raw. Just peel off the outer fibrous part and eat the delicate interior.

The rhizomes are going to look sort of hairy. Wash them as well as you can, then peel them just like you would a potato. Your goal is to extract the starch from the rhizome and there are a couple of ways to do this.

You can break up the rhizome and then put it in a small bowl of water and squeeze the rhizome pieces in the water until the starch is remove. The water turns a milky white. Let the water settle for a couple of hours and the heavy, starchy flour will settle to the bottom. Pour off the water and spread the flour out to dry.

The second way is to use your knife to squeeze the starch out onto a rock. Just lay the rhizome flat and slide your knife down the rhizome, sort of like you’re squeezing toothpaste from a tube. The starchy paste will collect on the rock.

Either way, you can let the paste dry and smash it with a mortar and pestle into a flour, or you can toss it in the pan and toast it as-is, toss it into a soup along with the corms, or you can eat it raw.

Of course, you can always make a bread with it by mixing it with other ingredients, but in a survival situation, you’re probably not going to have access to yeast and all that good stuff. 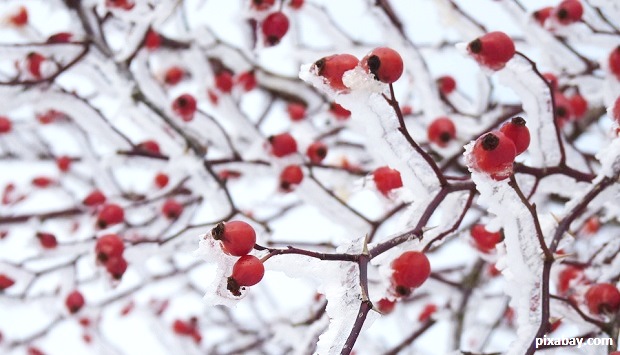 These pretty berry-like plants not only add a pop of color to the winter landscape, they’re also a good source of nutrition and can be found in enough quantity to be worth the effort. Rose hips are the fruits of the rose plant and are usually red or orange but can also be dark-colored. Just open them up, pop out the seed, and eat the flesh.

They’re not just for Christmas anymore! Pine trees provide a couple of different sources of food. If you’ve ever eaten pesto, you’ve eaten pine nuts, which are found in pinecones. There is some work involved for the amount of food that you get, but there’s also a tremendous amount of calories and nutrition in them.

Just one cup of pine nuts has 909 calories, 92 grams of fat, 23% of your RDV of potassium and 84% of your RDA of magnesium. They’re also a good source of fiber, so that you have a slower digestion process. You’ll feel full longer.

All pine trees have edible nuts tucked into the pine cones, but only about 20 species produce seeds that are large enough to warrant the effort. Still, in a survival situation, something is better than nothing. Fortunately, there are often many different types of pine trees in the same area, so if you don’t get decent-sized nuts from one, try another.

Even if there’s snow, it’s still possible to dig through the snow to get to fruits, and if you’re lucky, you may even find some grapes or berries, especially cranberries in Maine, above the snow.

One of the advantages of having thumbs is that you can dig through the snow a bit if you find a bush to see if there are berries buried. Apples are another great resource that you can find under the snow.

Yes, they’ll be frozen, but they’re delicious, nutritious, and packed with carbs. They also drop late, so it’s probable that they were frozen before they rotted. Other fruits to keep an eye out for include peaches and pears.

Believe it or not, most (99%) of all grasses in the US are edible. They’re often tough for your body to digest, but they’re better than nothing. This includes wheat, oats, and wild meadow varieties. The best part to eat in the winter is the starchy base and the seed heads.

1% of the seeds are toxic and need to be cooked before being eaten, and if seeds are blackish or purple, avoid them because that’s a sign of poisonous fungus. Eat them if they’re green or brown.

I often consult a man very close to me when I have questions such as these, because he’s actually been there, done that as part of his army survivalist training. He made it all the way through the training and has described in great detail (and to my dismay) exactly what a bug feels like when you eat it. He says the trick is this – crunch (chew), crunch, crunch, crunch, swallow!

Aside from his advice about how to eat a bug with minimal “biting back”, he also says that the most crucial step to survival is knowing the plants, animals, and insects of your area. Know what’s edible and what’s not, and most importantly, know what will kill you if you eat it.

If you have a problem with being too thin, it’s important to realize that your body uses more than just carbohydrates for energy – it can also use protein and fat. The bottom line is that your weight isn’t dependent upon eating carbs. It’s a matter of calories in versus calories out. It doesn’t matter if those calories are in the form of carbs, fat, or protein.

There will likely be some energy dips while you’re transitioning from carbs to protein, so if you’re planning to use protein as your main source of energy during a retreat, you may want to do that before you leave. In real life, of course, you won’t have that luxury, but until then, do what you can to survive the survival training.