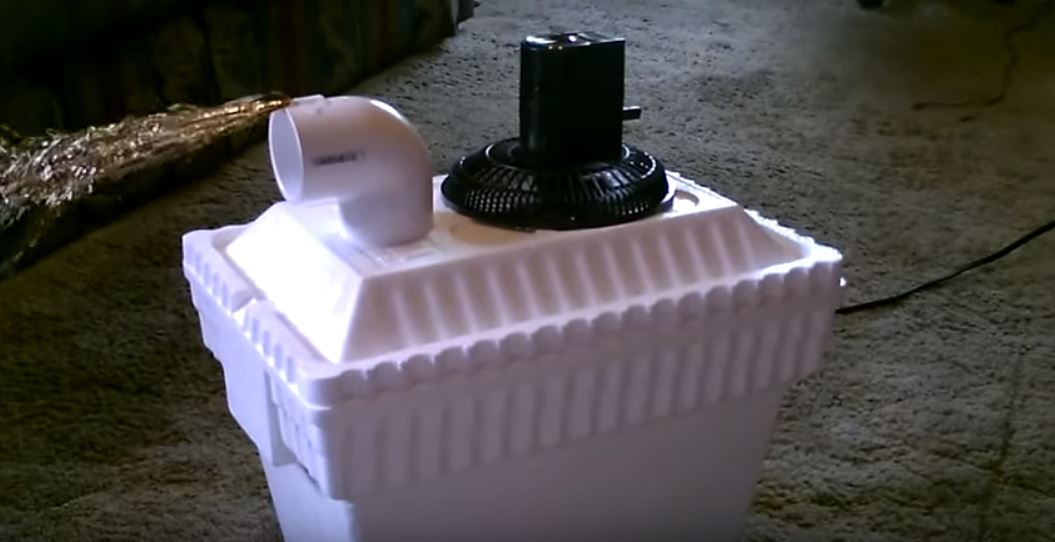 I’m not sure how the weather is in your neck of the woods, but here in Survivopedia-land I’m dealing with 93-94 F on a daily basis for the last couple of months.

Being hot as hell, the air-conditioner works full time during the day. Now, the question is, how can you deal with a heatwave when it comes to off-grid survival? I mean, our ancestors managed to get through it, but what would happen to you, dear reader, in a survival scenario?

The idea is that there’s nothing wrong with trying to improve your quality of life even when it comes to life in the wilderness.

Now, off grid survival means that you’re basically out there somewhere on your own, without a hardware store nearby and likely without power, right? Can you improvise something to mitigate a bad case of scorching heat, at least temporarily?

Well, let’s talk about a few ideas about how to DIY your own air conditioner in case you need it, shall we? Let’s begin with the basics.

Since we’re talking about off-grid scenarios, the point is to build an air conditioner which doesn’t eat a lot of power, like the regular ones do, i.e. we want to manufacture a cooling device that can work well on solar power or using a car battery.

Our first DIY project is about an air cooling gizmo that is manufactured from readily available, dirt cheap materials. It’s fun and easy to build, yet strong enough to cool you off some on a day like this (today was a real scorcher).

The materials required for this baby are an ice-chest (a hard-sided/plastic one), PVC pipe, a small fan, and ice. Easy as pie, right? The trick is how to get the ice, but if you can sort that one out, well, the world will be your (cool) oyster.

To power this device, you’ll have three choices: solar power (you’ll have to put a solar-panel on the bucket-list), a battery, or your own automobile using the car’s 12 volt cigarette lighter plug.

A block of ice will last for five hours (empirical evidence) while larger blocks will last you twice as that, up to ten hours. The DIY job is very straight forward and here’s a video tutorial with easy to follow instructions.

You’ll need a cutting tool to make the cuts in the plastic ice-box but, truth be told, this is a 15 minutes job tops if you’re good with your hands and you own the proper tools. This improvised AC is able to deliver very cold air – 42F more precisely – but when the ice runs out (as in melts away), you’ll start sweating again.

This is a variant of the first DIY project, as it uses basically the same principle and materials as the first one, sans the plastic ice chest.

Instead, you’ll be using a Styrofoam ice-box, which is way cheaper and easier to cut for installing the fan and the PVC pipe. The rest is basically the same, i.e. a solar panel/battery for powering the fan and some ice.

As I already told you, in these 2 DIY jobs, which are massive fun if you’ll be involving your kids, the essential ingredient is the ice. If you can’t get the ice, you’ll be doomed. Here’s the video tutorial with detailed and easy-to-follow instructions.

This home-made air conditioner is an internet classic known as the five gallon bucket air cooler. Also, a variant of the previous two, using the famous five gallon bucket instead of the plastic/Styrofoam ice-box. The materials and tools required are the same: the fan, the PVC pipe, etc.

Remember folks, all three of these projects are non-compressor based, hence getting the ice is the catch 22.

However, one frozen jug of water put in the five gallon bucket air conditioner lasted for six hours, so we can describe these DIY “sans compressor” air-conditioners as the “redneck’s cooler”, provided you have power (via solar, generator, etc.) and a refrigerator available to make ice.

It’s also good if you can’t afford or don’t want to buy a regular AC unit for various reasons. I almost forgot the most important part: here’s the video tutorial.

The next project doesn’t require buckets or ice chests and it has a fancy name too: the DIY geothermal cooling system. This is a rather complicated project which requires some skills and some tools and materials. The general idea is pretty simple, though.

This guy is using the water from a deep well and a small electric pump to recirculate it via hoses. There is a copper-hose section and also a bunch of recycled parts from an old AC unit used to build a very interesting air cooling device. It basically recirculates the cold water from the well to cool the air via a copper radiator mounted inside the house.

This is a low-energy-sans-compressor air conditioning unit, but it doesn’t require ice for doing the cooling job, hence it’s a true off-grid air conditioner, provided you have the gear and the well.

Truth be told, the geo-thermal cooling device makes for a very interesting idea to say the least, as this DIY air conditioner can be powered using a solar-panel installation or a car battery for extended periods of time (it’s not power-hungry).

Last but not least, enter the pompously named DIY Homemade Vortex Cooling Gizmo. Keep in mind that you’ll need a source of compressed air for running this DIY air cooling project, so there’s a catch 22 built into it from the beginning. As long as you have compressed air available, (as in a compressor which requires power), here’s the video-tutorial depicting all the stages of the project (there’s a part deux too).

Provided you have all the tools, materials, and skills required, you can build a very efficient air conditioner that can decrease the temperature anywhere between 10-15 degrees F when it comes to cooling. The idea is to build a vortex cooling tube (it has no moving parts) which separates hot and cold air using a compressor.

Thus, going from high pressure to low pressure, you’ll create a temperature drop, i.e. air conditioning. The same basic principle is used in commercial refrigeration systems like your AC unit or your fridge.

To make things simpler (less DIY that is), you can buy an expansion valve or an orifice-tube setup from an auto parts store (20 bucks or less) and save a lot of assembly work.

I hope the article helped. If you have other ideas or comments, just use the dedicated section below. Good luck and have fun folks!