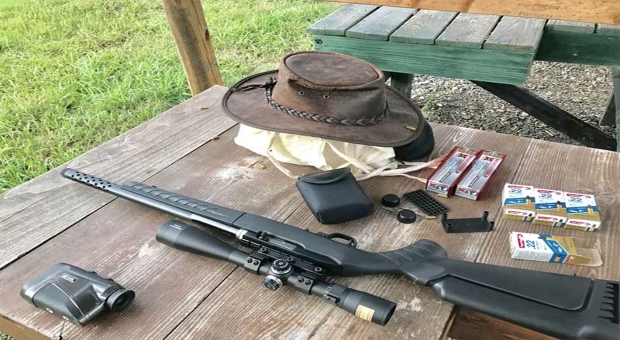 Why You Should Own A Ruger 10/22 Takedown

Without a doubt, the .22LR is one of the most prolific and enjoyable cartridge to shoot.

Ammo is cheap, the recoil is light, and it can be used for a variety of purposes. The Ruger 10/22 Takedown is a great option for any situation and should be a top contender for your survival set up.  In this article we will look at the main reasons anyone should look to this rifle as a viable option to have with you whether it be in the woods or a “bug out” scenario.

Those who are serious about hiking or backpacking for extended distances will know that your loadout is just as important as the route you will travel. Overpacking can lead to unnecessary weight that could then lead to becoming fatigued easier. That is where the adage “ounces leads to pounds, and pounds leads to pain” comes from. As you incrementally add more weight over longer periods of time the heavier that weight will feel as you fatigue. The 10/22 Takedown weighs in less than 5 lbs. which, with a little planning, can easily be added to your pack for the long hauls.

Another bonus is that the small stature of the ammunition makes it easy to carry hundreds of rounds without adding undo weight. Unlike rifles with intermediate cartridges, the average .22LR ammunition would yield you 133 rounds per pound. In comparison, the 7.62x39mm gives you 27 rounds and 5.56x45mm only provides 37 rounds per pound. This gives you additional flexibility to pack other lifesaving items like water, water purifying devices, food, or first aid.

Due to the design of the Ruger 10/22 Takedown, packing this rifle would not be overly difficult. Having the rifle in two pieces will allow anyone to strap it to either side of your pack or tuck it inside.  This will keep it out of the way while you are fighting through thickets or rough terrain. “But, assembly has to be a pain, right?” Not at all. Ruger has made the 10/22 Takedown easy to assemble to ensure for quick deployment. All you need to do is hold down on the takedown lever, pull the charging handle back slightly, align the barrel/receiver and twist. Once you have completed the assembly a few times, it becomes second nature. After you have become a pro with assembly, you will be able to employ the rifle quickly if game presents itself to harvest. 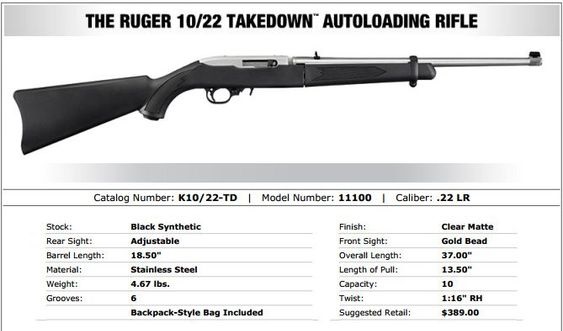 Fun for the whole family!

The 10/22 Takedown is the perfect rifle the whole family can use. Since the .22LR cartridge is light recoiling and the rifle’s overall weight is more than manageable, the Ruger 10/22 Takedown is versatile enough for everyone to use it. In addition, the semi-automatic function of the Ruger 10/22 allows for quick follow on shots if you miss your game or multiple rounds would be needed at once. Ammunition is light enough to be able to carry hundreds of rounds to increase the entire family’s proficiency and extend their range. An accurate shot up to 100 yards should be expected with the iron sights. However, the upper receiver is tapped to be able to accept a picatinny section to add an optic for more accuracy. Red dots have become extremely popular and easy to use. With a red dot precisely zeroed, a child as young as 5 years old should have no problem hitting a 100 yard target.

One of the biggest assets for the Ruger 10/22 Takedown is the initial price as well as the price of ownership. Most big box stores will have this rifle available at the $390 price point. This is very comparable to budget AR-15s but will weigh less and allow you to carry more rounds than the larger rifle. Ammunition costs vastly less than other rifles or pistol caliber carbines. A brick of 5,000 rounds of .22LR can be found for about $175 where 9mm will only yield 1,000 rounds for the same cost. 5.56x45mm will cost about $300 for 1,000 rounds at the time of this article being written. However, as we have seen in the past, ammo cost will fluctuate with the market and political climate.

An inexpensive red dot like the AT3 Tactical RD-50 will only add $75 to the total cost. Equipping the Ruger 10/22 Takedown with a quality, yet inexpensive, red dot sight will assist in target acquisition and accuracy. It also helps inexperienced or young shooters to shoot better and build confidence. So, for less than $500 you can buy the Ruger 10/22 Takedown, red dot, and still have plenty of money to buy a few hundred rounds to get started. An awesome value for a survivalist starter kit.

It’s not all sunshine and rainbows?

There is no doubt that some may have issues with the .22LR round being a viable survival cartridge. In a world where intermediate rounds are easily accessible, a lot of people may argue that an AR-15 or AK partner rifle is better suited. That, admittedly, is a good argument and one that you will need to work out on your own. However, if you feel .22LR is what you need then the Ruger 10/22 is a perfect option.

With the prevalence and popularity of the .22LR round, it is recommended that everyone own a rifle or pistol chambered in that cartridge. Ammunition will be easy to find if it is needed in a survival or bug out situation which makes it ideal. With a little preplanning, it would be easy to stock up on a few thousand rounds to have in case of an emergency. In addition, the Ruger 10/22 Takedown offers you the ability to easily pack this rifle into the forest with enough ammo to help you fend for yourself. Overall, the 10/22 is one of the best options for a light-weight rifle to hunt small game and protect yourself with. Do not find yourself underprepared.

Mark Grimsley is a former U.S. Army Officer that started his career as an enlisted Abrams crewman. He has served in 3 overseas tours that include Korea in 2002, Iraq in 2003 as a tank gunner and Afghanistan in 2010-11 as a logistics officer. He completed numerous schools in the Army to include Air Assault and Airborne. Currently, Mark is an Army spouse and enjoys running a YouTube channel.