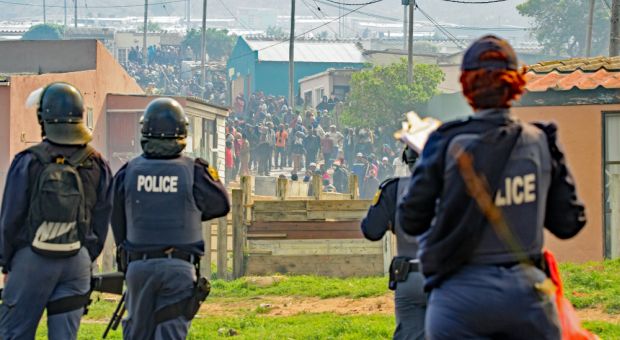 Why South Africa Is Taking Guns From 300,000 People

South Africa has been in political turmoil as long as I can remember.

From the troubling days of apartheid, which ended in 1994, through the presidency of Nelson Mandela, up to modern days, the country has been torn with strife, despite the best efforts of some good people on both sides.

Today, South Africa seems to be just one more country which is on its way to socialism, as the socialist-leaning African National Congress (ANC) and Economic Freedom Fighters (EFF) parties have control of the government and are pushing to redistribute the wealth of white South Africans into the hands of “more deserving” blacks.

A recent court case has overturned a lower court ruling which stated that Sections 24 and 28 of the Firearm’s Control Act were unconstitutional. This has put some 300,000 gun owners in jeopardy, who are being told that they have 60 days to turn in their guns.

The specific sections of the law which are causing the problem are:

What this means to the man on the street, is that if they depended on the previous ruling, which nullified this law, they are now in violation of the law, due to the law now being back in effect. So if they didn’t renew their license, it is now expired and they must turn in their firearms to the police, who will destroy them.

Talk about a catch-22 situation; the gun owners affected by this ruling had no chance. I wouldn’t be surprised to find out that the whole thing was orchestrated, behind closed doors, in order to get the hands out of these lawful gun owners. No evidence has come out to support that theory, and none may ever come out, but if I was a suspicious man, I’d think that.

This is not a buy-back either. The owners of those guns, who bought them legally, have not only lost their guns, but whatever investment they had in them as well. But for many, the financial loss might be small, compared to what else they might lose.

There are those amongst the gun-control crowd who will say that this is no big deal; only a few people were affected and they wouldn’t have been affected if they hadn’t broken the law. But the reality is that the gun-control crowd is never satisfied. They will smell blood in the water and seek to take the next step towards total gun confiscation. As with any other such measure, each victory for the other side opens the floodgates a little wider, preparing the way for the next encroachment on people’s liberty.

A Serious Blow Against Freedom

Anyone who truly understands the US Constitution also understands that the First and Second Amendments are our only guarantee to our other freedoms. This works in other countries as well, like South Africa. Leftist progressives, who are working towards gaining total control, need to get guns out of the hands of citizens, so that they can impose their will on people who can’t fight back.

Taking guns away from citizens, disarming them, is a classic part of any socialist or communist dictatorship, which has played out over and over again. Hitler disarmed the Jews before rounding them up and sending them to the gas chambers. Mao disarmed China before killing tens of millions of their citizens. The list goes on and on.

An armed population is able to resist tyranny, which is why the Founding Fathers of these United States made sure to include the Second Amendment in the Bill of Rights. They had just fought a war against tyranny and didn’t want to see it rise again. Yet that lesson has been forgotten, perhaps intentionally, by many today. Those on the left who haven’t forgotten this lesson know that to accomplish their goals, they are going to have to disarm us, just like the South African government is trying to disarm their people.

We must realize that this is a world-wide, coordinated movement, by those on the political left. Disarming citizens is a prerequisite to implementing their plan for a one-world government, so they are taking every small step they can, wherever they can, to remove more guns out of the hands of law-abiding citizens.

As we all know, this doesn’t affect criminals in the least. They don’t buy their guns legally to start with and definitely don’t register them, even if there are registration laws. So none of them got caught in this situation; nor will any of them be turning their guns in. Rather, this law, like just about any other gun law, penalizes law-abiding citizens for the actions of criminals.

The timing of this legal reversal is interesting, because the South African National Assembly recently voted in a 241 – 83 majority, to amend their nation’s Constitution to allow for land expropriation without compensation.

This calculated move is aimed at white farmers, who hold much of the best land in South Africa. While it hasn’t yet started, as of this writing, the expectation is that government officials will start taking white farmers’ land from them and “redistributing” it to others.

These farmers have been living under a considerable threat lately, not only of losing their lands, but also of losing their lives. Murders of white farmers and their families has been rapidly increasing, with a considerable percentage of the murders being gruesome, to say the least. Some farmers have been looking to sell out and leave, but they really don’t have anywhere to go. South Africa is their home.

If some of those 300,000 gun owners who have to turn in their guns are white farmers, disarming them is going to put their lives at even greater risk, inviting attack from the criminal groups who have been attacking the farms. There is no demographic data yet on who are included in that 300,000 figure, but it would not be surprising to find that a majority percentage of them are white citizens of South Africa, not the trouble makers who have been killing whites.

What Does this Mean for Us?

The same sort of situation can’t really play out, in the same way, here in the United States. While the legal maneuvering or blundering which has caused these people to lose their gun rights could, the people who would be affected are not the minority. There are something like 90 million lawful gun owners in the United States, and they are not likely to give up their guns.

But there are those on the political left which could be looking at the situation in South Africa and seeking ways of copying what they have done and applying it here. So regardless of whether it was intentional or not, the next time around it will be.

Once again, the goal of the left is to disarm all citizens of all countries, so that they can take and keep control. With so many Second Amendment proponents in the United States, they will have to use every trick they can come up with to accomplish that goal.

As we know, the left loves to use the courts to push through what they can’t succeed in pushing through Congress. They did this with abortion; they did it with gay marriage; and they’re going to do so with any gun control they can. Their lack of success in passing any “meaningful gun control measures” through Congress doesn’t mean defeat for them; it just mean that they need to use different tactics. The courts have been an effective one for them in the past.

We Must Make a Decision

At some point, each and every one of us is going to have to make a decision as to whether we turn in our guns (or some of our guns) or practice civil disobedience. I highly recommend making that decision now, before it comes down to the wire.

The thing is, when the time comes, it will probably come as a surprise. I’m sure those gun owners in South Africa were surprised that the earlier court decision was overturned. That surprise works in favor of the other side and against the gun owner. Waiting until then may not give you the time you need, to think the situation and all its ramifications through properly.

If the left gets its way, some day police or military forces will be knocking on doors, searching for guns. When that day comes, we will have to choose whether we submit like good little sheeple, turning over our guns or we stand and fight. That’s the sort of decision we have to make.

We also have to realize that if that day comes, it would be much better for us to band together and fight the government’s forces, than allow them to take us on individually. None of us can withstand a SWAT team alone; but working together we are the world’s largest army. That’s something that should give the other side pause.