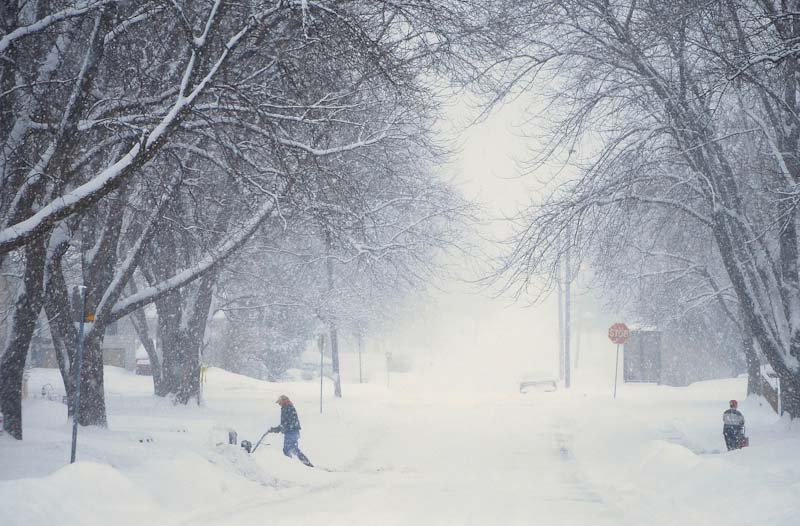 It’s fall, so that means winter is right around the corner. For hundreds or even thousands of years, winter was the annual “disaster” which everyone dreaded, for a large part of the world. Much of what our ancestors did was to ensure that they would be able to survive through winter, when they couldn’t hunt, gather or farm. They might find themselves trapped in their homestead or even their home for days or weeks at a time. Without the proper preparations, they might not survive those blizzards.

Times have changed and modern technology has greatly affected how we face winter. No longer do we face the same risks of starvation; we have gas or electric heating in our homes and water comes piped into the house so that we don’t even need to draw it from the well.

But what if that all goes away? I’ve been through more than one blizzard or ice storm that caused the power lines to fail, leaving us in darkness. Power was generally restored within hours; but not always. There have been times when it took a few days for the power company to get all the lines repaired, just because there were so many of them down. Getting through those few days can be a challenge, even for us preppers.

One of the things we need to come to grips with is that much of our prepping is based around TEOTWAWKI events. There’s nothing wrong with preparing for those events; but that doesn’t mean we forget about the shorter-term disasters that might hit our lives, such as a winter blizzard. Things that make sense for surviving the permanent loss of the grid don’t necessarily make sense for short-term survival, any more than the things that we might do for short-term survival will ensure our survival past a few days.

If there’s anything we can count on in a blizzard, it’s the power going out. That shouldn’t be much of a problem for us preppers, as we’re always talking about the grid going down. The problem is though, that our go-to solution for electrical power is solar, and solar panels aren’t going to work in a blizzard. Even if the snow doesn’t cover those panels, it’s difficult for enough light to get through to them, while the snow is falling.

The simple solution is to go against everything we teach as preppers and get a gasoline generator. We tend to avoid those, because we can’t use them for long-term survival. But that doesn’t mean that we can’t use them for short-term. Even a fairly small generator will provide enough power for your refrigerator, some lighting, the well pump (if you have a well) and other emergency uses. Buying an inverter generator will help your fuel last longer, even though the generator is more expensive.

To get the most out of that generator, connect it to your battery backup system when it is running. That way, it can use any extra capacity to charge your batteries, ensuring that you’ll have electricity when you’re not using the generator.

We all talk about wood being the way to go for heating; preferably from a wood-burning stove, as that will generally provide more heat than a fireplace. But do you have your wood pile where you can get to it during the blizzard? Is that wood pile protected from rain and snow, so that the wood you want to burn is dry when you need it to be? I see a lot of people with wood piles that are not protected and wonder just how well that wood is going to burn in an emergency.

The other thing to consider is some alternative source of heating, like kerosene or propane. While neither of these would work for very long in the wake of an EMP, they will work fine to heat your home for a few days or even a couple of weeks, assuming you stock the necessary fuel. That’s actually easier with propane, as you can get a 500-gallon propane tank installed behind your home.

Some small propane heaters use the same sort of propane bottles that are used for camping stoves. Those can be extremely expensive to use; but you can easily buy an adapter, which allows you to fill those off of a larger tank, such as the kind used for a barbecue grille. You can even buy 100-pound tanks and use them to refill the smaller ones, cutting your propane costs considerably.

Along with the Heating

Of course, how well your home is insulated and sealed will make a huge difference in just how well you can heat it, regardless of how you generate heat inside that home. All that snow that’s falling outside your home might just help out in that regard, especially if it is later in the season and there’s already a few feet of snow piled up outside.

Snow is a fairly good insulator; in that it remains at a constant 32°F. So, anything trapped inside or underneath that snow is going to be held to that temperature. If the ambient air temperature is below that, it’s better to be buried in the snow, than exposed to the air.

What this means is that if we pile snow against the outside of our home, it can act as insulation against the colder ambient air. Granted, 32°F isn’t exactly tropical weather; but that will make it easier for whatever heat source we are using inside the home to keep the home warm, as there won’t be as much heat radiating out from the home. Just be sure to replenish the snow supply as needed, to keep it from melting away from the home’s outer walls.

Freezing temperatures can provide serious problems with the water. I’m not talking about the water coming from the city; but the water in your home. I’ve seen a lot of pipes break through the years, because of not being properly insulated. When that happens, the main valve has to be shut off, leaving the home without water until the plumber can make it out to repair it.

Insulating pipes really isn’t all that big a deal, nor is installing the Styrofoam covers over the outdoor faucets in the wintertime. The old trick of leaving the faucets dripping works too, at least most of the time. It just takes making the effort to do the extra work.

Another issue for many of us is that our backup water supply is contained in water barrels attached to our rainwater capture system. While I’m a firm believer in rainwater capture, I recognize that it has limitations. The water in the barrels might not freeze; but the water in the spigots and any connecting pipes might, along with the water at the surface. That not only can make it difficult to get at your water, but it might leave you in the position of being without water, when the ice melts and the water leaks out through cracked pipes.

I’m sure you’ve got plenty of food stocked up, like most preppers do. But what about a way of cooking it? Unless you bought a wood-burning stove specifically with the idea of being able to cook on it, you might not be able to. Most aren’t built with that in mind anymore.

The backup for most of us is cooing on our barbecue grille or in a fire pit. But is that going to work in a blizzard? Do you really want to have to go outside and cook in the middle of a blizzard? My fallback is a camp stove, which I can use in my kitchen. While my favorite is the Coleman Dual Fuel, that isn’t safe for use indoors, so I use a propane one. Just make sure that the one you buy can be used indoors and that you have enough airflow to provide oxygen for the stove.

Heavy snows usually mean heavy snowplow usage, especially if you live on a major road. We all know what snowplows do, especially just after you spend hours clearing your driveway. The key to avoiding all that frustration is to wait until after the snowplows have done their thing and then dig out your driveway.

There’s only one problem with that. That is, shoveling snow that’s been packed by a snow plow is much harder than shoveling freshly fallen snow. But then, you’re going to have that problem either way. The thing is to find a way of cutting through that snow, without having to break your back. That either means a snowblower or snow plow.

There are snow plows that will mount on any pickup truck or SUV. I’ve also seen people mount these on passenger cars. While the car doesn’t have the physical strength of a truck, it can still be used to plow snow. You just have to take smaller bites. The same can be said for the snow plows which will mount on a zero-turn radius lawnmower, if you happen to have one of those. While the mower doesn’t have the power of a pickup truck, it’s certainly better than shoveling all that snow by hand.

The other thing that you should do, if you live in a snow-prone area, is try to work out a way to work from home. Thanks to the COVID-19 pandemic, many employers have developed policies for working from home or hybrid home/office working schedules. If your employer doesn’t have that already in place, you might talk to them about it, assuming that your job is such that it can be done from home. Working at home from an actual desk is better than trying to use the dining room table. I’ve done both, and I’m glad I have an office in my home. You’ll also need a way of connecting with your work computer from home, so that you have access to your files, if you hadn’t brought things home the night before. But again, this is all common stuff, now that we’ve survived COVID. 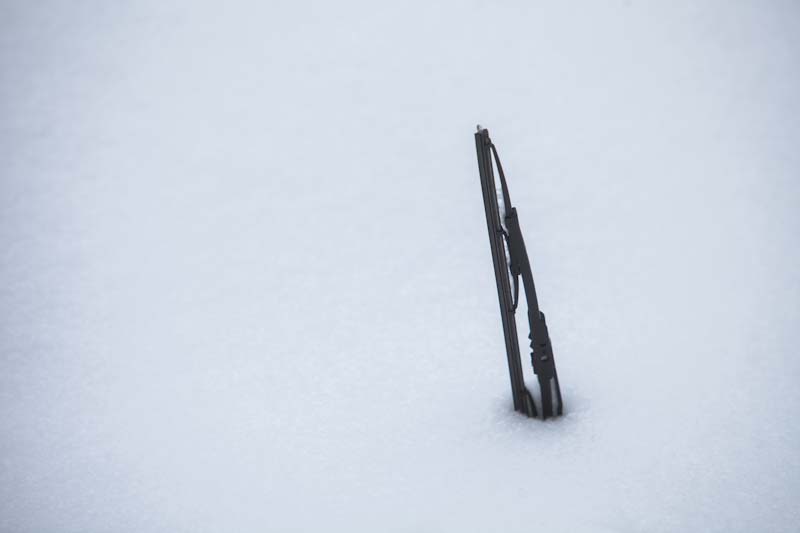 Off the Road in a Blizzard – What to Do 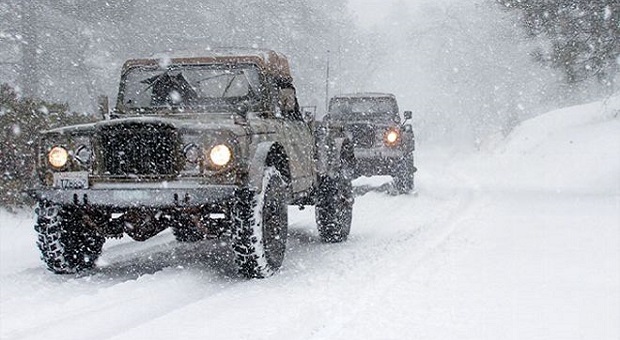