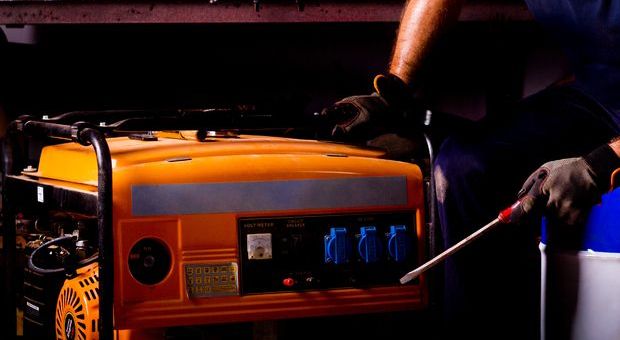 I am sure that, on some level, owning a mini electric company must appeal to anyone who pays an electric bill. I am equally sure that it represents much more than a simple cost savings to preppers. To us, the ability to generate electricity equates to freedom, independence, self-reliance and survival.

Unfortunately, generators are a “black box” to many of us and this makes us hesitant to buy one. A generator is a major purchase for most folks, and it is natural to want to understand how competing technologies compare and how specific models stack up against one other before we make a major purchase.

Many of us do not understand how generators work in great depth or have any desire to. If you fall into that category, that is just fine. You can be a competent driver without being a mechanic. Fortunately for aspiring or inexperienced generator owners, producing your own electricity is easier, safer and more affordable than ever.

Survivopedia has posted many articles on generators and alternative energy lately and we have received some good questions regarding safety from our readers, so I will address some of those questions.

Wiring Issues to Beware Of

While each type of generator has safety issues unique to its design, they all have a certain of things in common. One thing most installations have in common is that the electricity they generate is conducted through wiring to receptacles or to batteries. 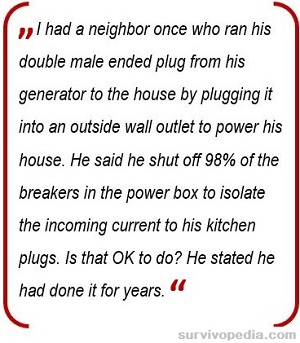 We were recently asked a good question about the safety of a simple, but dangerous, method of powering home receptacles with a (presumably) portable generator.

The reader’s neighbor used a power cord with plugs on both ends (presumably NEMA 5-15 plugs) to power wall receptacles in his home with his generator.

The cord described is simply an electrical extension cord with what most people would call two male ends instead of a male end and a female end. The neighbor turned off most of his home’s circuit breakers so he would only energize a particular circuit of wall outlets. He ran the aforementioned cord from a power receptacle on his generator to a wall receptacle on the isolated circuit in his home.

The email stated that the neighbor has done this for years without any problems and the reader would like to know if the practice is safe, as his neighbor maintains.

To answer the safety question, there are definitely some serious safety concerns with connecting a generator to home wiring in this manner.

If you drive down to the corner hardware store and ask for an electrical cord with a plug (male member) on each end, I would bet dollars to doughnuts that the retailer will not have one. If the hardware shop does have one, it probably will not sell it to you because the design of the cord is inherently dangerous and doing so would create a huge liability.

The primary safety concern here is that if someone unplugs the cord from the wall receptacle while the generator is running they will be holding a “hot” plug.  If someone touched that plug, their body would conduct the current supplied by the generator and such a shock could easily result in a fatality under certain circumstances.

The same thing would occur if the cord was stored after use and later plugged into any live wall receptacle in any home by someone thinking that it was an extension cord. Plugging each end of the cord into a live wall receptacle, would cause an instant short circuit and a fire danger, so you will not likely find such a cord for sale by any business concerned with staying in business.

Could you make a cord as described? Of course. You could make one very easily, but it would be inherently dangerous in the wrong hands, so I would not do it. It would not instantly burn down the house or kill someone as the neighbor had it configured.

To most people, it might appear to be fine because they have never seen a hot male connection before. But as soon as one end was plugged into a live receptacle and the other plug touched any kind of conductor, the fireworks would begin.

Powering home wiring through wall receptacles is called “back feeding.”

As demonstrated in “1” back feeding can present a shock or electrocution hazard to you or others in your home.

3. Building Codes Are Meant to Be Respected

Keep in mind that proper electrical wiring is safe and should not deter you from generator ownership. But unless you are willing to bet family and farm on the quality of your work, please buy certified products or use a licensed electrician to perform wiring.

DIY projects make us feel self-reliant and can save money, but if you are at all uncertain about electrical wiring, please get your DIY fix from projects that are less likely to result in death or conflagration.

7 Rules for a Safe Operation

Controlling the environment around generators, battery banks and wiring is important.

Consider the following safety factors that can stop your generator from working or make it unsafe:

Fuels Can Harm You Too

Good fuels must store a lot of energy in order to be effective, and this causes safety issues when storing and using them. Gasoline stores 15 times the energy per ounce that TNT stores, so there are some safety guidelines for storing fuel.

The amount of energy contained in many fuels, such as gasoline, is not immediately obvious to most of us because we burn the gasoline a tiny bit at a time over a long period of time as opposed to detonating the entire mass in an instant like when TNT is exploded. But when gasoline is lofted or vaporized prior to ignition, it burns very quickly or deflagrates, such as in a fuel-air bomb, which is probably the best-known thermobaric weapon to most people.

If you store enough fuel to last for months or year, you are storing a lot of potential energy in one place. Fuels are combustible and most can be made to explode under the right circumstances.

Even fuels you probably have in your kitchen, but do not likely think of as fuel, much less an explosive, yet many buildings have been exploded using fine wheat flour as the primary fuel source.

Because fuels are dangerous, many municipalities regulate how much fuel residences and businesses can legally store. In many cases, emergency services are contractually obligated to respond to fires and they would like to survive the experience so it is understandable that they will become concerned when they learn that you store large quantities of volatile fuels, metals that burns at very high temperatures, ammunition, explosives or other hazardous materials.

Just as you are likely using electricity to read this article, yet do not feel threatened by having electrical energy close to you.  You should not be irrationally afraid of fuel, wiring or generators as long as they are stored and used properly. You probably do not wince at the flour in your pantry every time you walk by it … at least I hope not.