You hear a lot about weapons in the prepping and survival community. More than anything are various discussions about firearms, with one person or another praising their favorite and trashing other options. The AR-15 is clearly a favorite as a home-defense weapon, even though shotguns can be even more effective when properly used.

You also see a lot of talk about alternative weapons; apparently from people that think ammo will run out and mankind will revert to a more primitive lifestyle. In such a situation, being able to defend oneself is still going to be critical because the lack of modern conveniences isn’t going to do a thing to make evil people any less evil. If anything, they’ll see a breakdown of society as an opportunity to do things their way, killing, raping, and stealing to their hearts’ content.

But there’s a place in the middle that I think is more realistic. That is the place where we may have ammo on-hand but not want to use it. Whether we’re talking about bugging in or surviving out in the woods, shooting a gun attracts attention; usually not the type of attention we want. With that in mind, it’s a good idea to have an alternative to fall back on.

I got interested in bows as a survival tool/weapon years ago when I was looking for something I could use as a realistic alternative to firearms. I’ve built a variety of different “alternative” weapons through the years, some rather rustic and some more sophisticated, but in truth, I wouldn’t want to depend on any of them unless I really had to.

The bow is different than any of them, though. First of all, the bow has been in continuous use for longer than any other weapon other than the knife. While spears have actually existed a whole lot longer than bows have, they really aren’t in use anymore. Besides, I’d hate to have to go up against someone that has a gun with nothing more than a spear. That doesn’t sound like I’d have a chance. On the other hand, a good archer does stand a chance against someone armed with a gun, especially if the fight is on terrain where the archer can take advantage of their weapon’s benefits.

One of the things that makes a bow such an effective weapon is that it is silent. That’s actually what I mean by the advantages of the weapon’s benefits. If you’re out in the woods or even prowling around the neighborhood, trying to catch the neighborhood gang, you can shoot a bow without attracting attention. There’s no way you can do that with any firearm, except perhaps a .22 with low-velocity rounds. What people call “silencers” but should really be called “suppressors” don’t make a gun silent; they just lower the sound pressure by about 30 dB.

Another big advantage of a bow is that you can make your own arrows from naturally available materials. That’s not to say that you can make an arrow for any bow, as some bows have too much velocity to work with wooden arrows. But if we’re talking about a lower-velocity bow, such as a Mongolian bow, then yes, you can make your arrows out of natural materials, ensuring that you never run out of ammo.

What Kinds of Bow to Use?

Bows have changed considerably throughout the centuries, with different design innovations improving upon the basic design. Throughout it all, though, the basic bow is still the same weapon, and today’s arrows are little different than the early ones, except in the materials used to make them.

We have a number of different bow styles to choose from today, whether purchased commercially or made at home. Choosing the right one for our needs can be a bit tricky and is largely dependent on the archer’s personal preference. What you ultimately choose isn’t as important as your ability to use it effectively, though.

The most common bows today are compound bows. The big advantage of those is that they “break” allowing the archer to hold their bow drawn with an effective force that is lower than the draw weight of the bow. That keeps the archer’s arm from getting tired, allowing them more time for the shot.

On the flip side of the coin, compound bows are much more complicated than other types. This means that while they may be a great option for a survival bow, they are also more likely to break. Not only that, but the various sights and other attachments added on to the bow can break as well, and they probably won’t be replaceable. It might even be impossible to replace a string if you don’t have the right equipment.

One of the most powerful bows ever invented was the English Longbow. These are generally a few inches longer than the archer is tall and have rather heavy draw weights. They were developed primarily for warfare, allowing the English archers to engage attacking armies at a longer range. The drawback is that you need a lot of room; trying to walk through the woods with a longbow is worse than walking through it with a long hunting rifle.

Perhaps the bow with the longest history of effective use is the recurve bow, sometimes referred to as the “Mongolian bow.” While there is an actual difference between the construction of a Mongolian bow and other types of recurve bows, they are close enough to each other that we can ignore those differences for now. Both are fairly short bows at about five feet long, which makes them rather maneuverable, even in the woods. The recurved bow tips add considerable force when compared to a bow that is not recurved.

If you are going to make your own bow, this is the one you would probably be best served in making. Not only is it a good all-around bow, but you can make arrows to go with it as well. For survival purposes, a recurve bow is easier to work with and easier to maintain, needing nothing special to string the bow.

For range and power, it’s pretty much impossible to beat the crossbow, a weapon that is so effective that Navy SEALs still use them. You can think of a crossbow as a rifle that’s powered by a bow, and you won’t be all that far off. Some can shoot accurately out to 1,000 feet.

The big problem with the crossbow is that it is basically a one-shot weapon. It takes so long to reload a crossbow that you can’t count on getting a second shot off, regardless of whether you’re using it for hunting or home defense. As a one-shot weapon, it is excellent, but you’ve got to drop it after that and pick something else up.

What about Homemade Bow?

There have been various videos that have appeared online showing how to make a bow out of PVC pipe, bicycle tire rim, or other materials. While all of these are possible, they are emergency options only. Those various different bows are not going to be as effective as a properly made bow.

However, if you are a woodworker or even a do-it-yourselfer, you might want to consider making a wood recurve bow or longbow in your workshop. Wood blanks for bows are available from various online sources. Some bows are laminated from two types of wood, providing more power. Making the bow consists largely of shaping the blank so that the middle handle is the right diameter to fit your hand and the bow tapers smoothly down to the tips. Recurving the tips is accomplished with heat, and some bows are wrapped in leather to help keep them from splintering.

Whatever you do, you’ll want to be able to at least maintain your bow, replace strings and build arrows. That alone is a challenging task to learn. Making good arrows takes time, and not all of the arrow shafts you start out with end up resulting in usable arrows. Making the arrowheads is another challenging task, especially when you consider that they need to weigh the same, as differences in weight will affect the aiming of the bow.

Archery has changed considerably through the centuries. Most archery taught today involves careful aiming, often using a sight attached to the bow. The location of the arrow, in comparison to the bow is different also, with archers in ancient times putting their arrows on the right side of the bow, which is much more natural than what is done today, with the arrow placed on the left side of the bow. This takes longer, as the arrow has to be passed from the right side to the left (for a right-handed shooter), before being nocked to the string.

Lars Andersen is a Danish archer who has dedicated his life to researching and recreating the old ways of archery, what was done back in the Middle Ages, including shooting instinctively. Much of what he is trying to recreate has come from looking at bass relief sculptures and other artwork showing archers in battle. Through this, he has found that the archers of old, who were reputed to do amazing things, did so not because of the methods we use today; but because they used much different methods.

The significance of this is that if he can do it, we can too. It is possible to learn how to shoot instinctively, both quickly and accurately. But doing so requires pretty much throwing out the conventional wisdom and starting over. 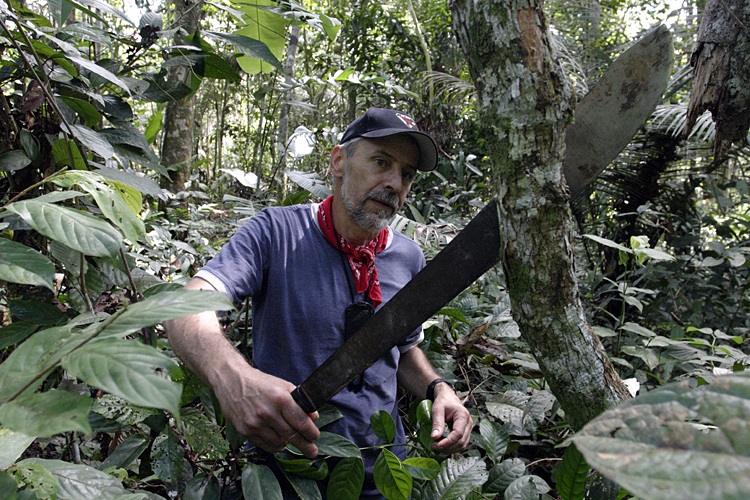