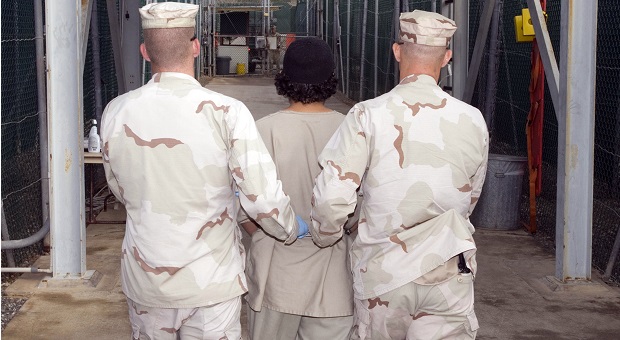 The Battle Over Guantanamo Bay

In a recent speech, President Obama restated his intent to close Guantanamo Bay. This was one of his campaign promises, and appears to be one that he actually intends to keep. Regardless of the wisdom of keeping it open, his plan is to shut it down and put it out of business.

This really isn’t all that surprising, considering his hatred of the military and the way he’s been releasing prisoners from the Guantanamo Bay detention facility right and left. These are convicted criminals, convicted of acts of terrorism, not criminals awaiting trial. It’s almost as if he’s in a hurry to get all those terrorists out of prison and back in the terrorism business once again.

We saw this very clearly when Obama traded five convicted terrorists for the deserter Bowe Bergdahl, who converted to Islam while in captivity. Nothing suspicious there at all. He can’t invite heroes to the White House, but he invites the parents of this deserter to join him.

Rumors has it, that three of the terrorists who Obama released in trade for that deserter tried to return to the terrorism business, as leaders in ISIS. Likewise, many of the terrorists who Obama later released might have returned to their former life. While they were sent to Middle-Eastern countries where that was supposed to be impossible, it didn’t take long for them to give their hosts the slip and try to make their way back to the bosoms of their fellow warriors.

In light of this, why is closing the Guantanamo Bay detention facility so important to the left? If it’s just another military prison, what difference does closing it make? But clearly, the left and not just Obama, have decided that Guantanamo Bay needs to be closed; the sooner the better.

To understand this, we have to understand that to the liberal left, appearances are more important than substance. They are concerned with doing things that make them look good and feel good. They want to be able to say that they hold the moral high ground and that they are the ones who are concerned about the poor, minorities and all other mistreated groups. This allows them to self-validate and brag about their moral superiority.

This is really no different than liberals increasing your and my taxes, in order to be able to give that money to the poor. In doing so, they are able to make themselves look good, as the people who care for the poor, without it costing them anything. At the same time, they badmouth conservatives as not caring about the poor, even though countless studies show that conservatives give more to charity than liberals do.

So, where’s the “feel good” in closing Guantanamo Bay? It has to do with the liberal perception of the military and the CIA. Rumor has it, that both of these organizations have “black sites” overseas, where they are able to ignore the constitution and torture prisoners. While I would have to say that terrorists deserve such treatment, if anyone does, it happens to be against the law. They get around the law by doing it outside the United States.

Guantanamo Bay has become a symbol to the liberal elitists of that torture. Whether or not it truly happens and whether it ever happened in Guantanamo Bay, they’ve picked that facility to be their poster child against the “evil” military and the “evil” CIA.

It doesn’t hurt that the prisoners in Gitmo are Muslims either. Somehow, Muslims have managed to climb to the top of the heap, as far as liberal causes are concerned. They have painted a picture of themselves as the most mistreated, misunderstood and discriminated minority in the world. It doesn’t matter that there are 1.7 billion of them or that they are 22% of the world’s population; islamists still pretend they’re still a badly mistreated “minority.”

So, in promising to close Guantanamo Bay, Obama is, once again, playing to his support base. It doesn’t matter if doing so actually accomplishes anything of substance, it will look good; that’s enough.

Closing Guantanamo Bay, like many of the other things that Obama has done, is really about building his legacy. He wants to be known as the greatest president that ever was and the one who fundamentally changed America. It doesn’t matter if he hurts America or the American people in the process, as long as he gets to build his legacy.

Interestingly enough, his own Attorney General, Loretta Lynch, has publicly stated that it would be illegal for Obama to close Gitmo. He does not have the authority to do that under current law. But then, since when has he ever been concerned about what the law said or what the law allows. As long as he has his pen and his phone, nobody can stop him.

This is an important point. Republicans won the mid-term elections in a landslide, gaining several seats in the Senate, which gave them a majority. But they did not win a super-majority; the two-thirds necessary for an impeachment. So, that mechanism for removing him from office is blocked. He has fired or forced to retire over 200 generals and admirals from the armed forces, essentially remaking the upper ranks of the military into his own image.

Obama’s key question in deciding whether to retain or remove these flag officers was whether or not they would fire upon American citizens. If they wouldn’t, they were out. Those who have remained behind are the ones who are loyal to him, more than being loyal to the country. That’s dangerous.

So, Congress is unable to remove the president and the military has been rendered incapable of a coup; there is no real way to get him out of office. The Department of Justice, the branch of the government who would have to build a legal case against him, in order to arrest and try him for treason, are firmly in his pocket. So, Obama has succeeded in neutralizing his enemies and made it impossible to remove him from office.

In other words, the only leverage to make Obama obey the law is his own convictions and his oath of office. Well, we have seen how much those are worth. Obama has constantly violated his oath of office and trampled all over the Constitution. He doesn’t believe in it, doesn’t follow it and clearly wants it to be changed. If truth were known, he probably would like to do away with it altogether.

So, while Congress is standing firm against Obama closing Guantanamo Bay, there’s really nothing they can do about it. He’s already proven that he considers Congress unnecessary and that in his mind, their only purpose is to rubber stamp his actions, thereby giving them more legitimacy. Ignoring them won’t be any more of a problem for him this time, than it has any other time.

This is the man who wants to close Guantanamo Bay. He is “justifying” it by saying that Gitmo costs too much money. In this, he’s right, but only because he’s forcing it to cost too much money. That facility costs just shy of $400 million dollars per year, between the 2,000 people who staff and support it and all their material usage.

So, why does it cost so much? That’s fairly easy to see. When the facility was at its peak, it had over 700 inmates. This warranted a staff of 2,000 people. Now that it’s down to just over 100, it still has that enormous staff. They’ve got 100 doctors and nurses in the base hospital, just to take care of 100 prisoners; while we have veterans who can’t get seen at VA hospitals.

There’s a huge legal staff, who spends their time reviewing the records of Gitmo’s prison population over and over, for the 100th time. Apparently, they’re looking for loopholes to allow those prisoners to go free, and they’re doing it on your and my dime.

Then there are all the other support services to take care of that huge prison population. $750,000 was spent to build the prisoners a soccer field, which is nothing more than bare dirt, some goalposts and chalk lines. I guess chalk is expensive in Cuba.

Please note that the only reason that Gitmo is costing so much is that Obama won’t allow those people to be reassigned. He wants that big number, because it gives him a “reason” to close it. Forget the fact that little of that cost will actually go away once it’s closed; it won’t show up as a “Guantanamo Bay” cost. Rather, it will show up in other military activities, where those personnel are reassigned.

Those prisoners should not be released and they should not be reassigned to other facilities in the United States. Part of the reason they have been incarcerated where they are, is to avoid them having contact with civilians, especially the press. Bringing them into the country and putting them in military prisons here at home, which is Obama’s plan, will give them that access, so that they can use the left-stream media for propaganda purposes.

This is probably not a fight we are going to win. The military has taken a stand against Obama, as well as Congress. They have stated clearly that they will not participate in the illegal closing of Guantanamo Bay. But when push comes to shove, they can’t stop him either. Obama will either find military commanders who will accept a direct order from him, or he will use another department of the government to accomplish his plan.

This man is evil. He has no regard for our country or for the citizens of it. He has stated clearly that his plan is to destroy it, and this is just one more chess piece on the board for him to use. He is making his own rules and ignoring the law, like the king that he thinks he is. And whoever comes after is going to be stuck picking up the pieces.