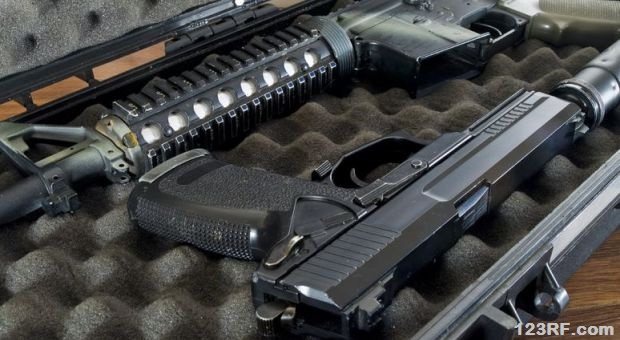 Today’s Preppers have thought hard and spent a lot of money on all that is needed  to get through  a time of major crisis.

In today’s rough and crime filled world a firearm is also necessity of life. Those who do not believe  this can not comprehend what is really going on in the world around them. They just feel that being a victim could never happen to them.

Firearms are purchased to defend the stockpile and stop those who would murder, rape, torture your family, or do anything else that their sick little minds can think of.

If you do not secure your loaded firearms, but only hide them out of plain sight, this is a recipe for  disaster. In particular, your own child or some other person could find your gun and shoot you long before you need the gun for survival or stopping a crime.

Then, you just become another statistically irresponsible gun owner, and if you live, your grief and other problems will never end. This is why you must have safe, secured places to store loaded firearms and  keep them at the ready.

Here are a few things to consider to make your home safer and more defensible in a time of major crisis. These suggestions will also buy enough time to enable you to access stored and loaded weapons without as much danger to yourself and others.

Strengthen All Exterior Windows and Doors

The outer doors and windows are your first line of defense against home invasions, burglaries, robberies and other criminal behavior.

These areas must be reinforced and strengthened to with stand multiple hard kicks or strikes from a heavy battering ram. Windows must be made to withstand repeated attacks.

Here are some ways to strengthen the windows:

And here are some ways to strengthen the outer doors:

It is the responsibility of the parents to teach their children firearm safety. Start with them young and explain it to them in a way that they can understand. Do it often so that they remember, but never assume that they or their friends are going to act responsibly in the presence of a gun.

Here are a few topics to talk with them about.

Parents should never hide a gun thinking a child will never find it. They will find it.

You may have put it way up on the top shelf of a closet. Children will do unbelievable feats of climbing to get at what they want.

The only thing that will keep a child safe from firearms is education and a well built lockable container.

Hiding Places to Avoid and Why

Most states impose laws that define the firearm owner’s duties to deny access to firearms by children. One of the most used criminal charges placed on adults by police after a child finds, discharges, or shoots someone with a firearm is Child Endangerment or Child Neglect. Civil liability is the next nightmare that comes your way.

Here a plaintiff sues you for your actions of not properly securing a firearm, all damages, and putting a child’s life in danger or worse.

Even if you are single or married without children do not use the following hiding places. Your family or other visiting friends may have children visiting with them, and just as badly, any criminal entering your home may gain access to these guns long before you do.

Aside from that, if you aren’t feeling well, get drunk, sleepwalk, or forget there is a gun hidden in these places, you can easily put your own life at risk.

In the days following a major crisis the high crime rate and chance of home invasion also creates a real need for safe storage places for firearms and valuables.

Everyone’s needs will be different. Here are a few ideas to consider:

1. Use a standard manual combination lock for a gun safe.

When choosing a safe be sure that it does not have a electronic push pad system only. These safes need batteries to operate the lock, no power you can not open the lock.

These heavy well built safes are designed to withstand fairly long periods of time when being hammered on, trying to cut open with torches, or trying to manually rip them open.

Also they offer a decent protection time against fire or heat. These safes should be kept out of sight in safe rooms. Bolting these safes down on to the floor is a required precaution. A good floor safe can cost between $499.99 to $1299.99.

These are small lockable metal safes that are designed to be bolted under desks, tables, inside cabinets, or closets. They use either a key or a palm finger push pad to unlock. The average price of these safes is between $90.00 to $199.99.

3. Rifle or shotgun quick access safe. These lockable metal safes are designed to be bolted down in closets or behind large couches. They use either a key or a palm finger pad to unlock. The average price of these safes is between $100.00 to $300.00.

4. A 50 caliber ammo can that can be locked with a padlock. This lockable handgun container should be placed out of plain sight and secured to the floor behind light furniture, in cabinets, or in closets. The average price of the 50 caliber ammo can is about $25.00.

During the time of a major crisis there will be a need to have firearms to protect your family and your stockpile. Your best and first form of defense is to have reinforced exterior doors and windows.

This will stop or slow down those individuals that are trying to break in and give you time to retrieve your weapons and set into action the home defense plan.

Keeping loaded weapons in a secured location protects you and your family from disaster. Use a combination floor safe to store unloaded firearms and valuables.

Always use quick access lockable safes when hiding loaded weapons for quick accessing in times of extreme danger. If you do not have a quick access safe, use a 50 caliber ammo can that can be locked and secured to the floor.

This article has been written by Fred Tyrell for Survivopedia, pictures – Dance’s Sporting Goods.