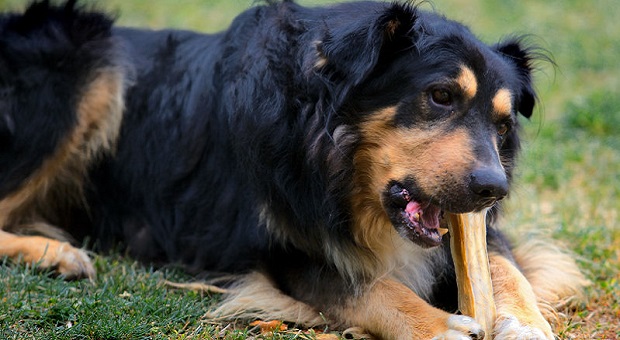 How To Make Survival Foods For Your Dog

A dog is a man’s best friend, or at least that’s what they say. It’s one of those popular wisdom kinds of things. If you ask me, a man’s best friend is his own conscience and set of skills, but we’re not trying to be philosophical, so let’s stick to dogs.

So, what do dogs and survival have in common? Well, dogs were domesticated thousands of years ago and they helped humanity a lot in terms of survival. In this case, by dogs I mean big ones, not Chihuahuas or cat-sized companion dogs, but the real deal, like a German Shepherd or a Rottweiler.

Dogs were used as avant la lettre alarms and early warning systems for protection (against wild animals for example or even in combat) and for herding and hunting. Naturally, in a SHTF situation, having your dog close, alive, happy and well-fed would be a great achievement.

Dogs can help with finding victims in the aftermath of a disaster, they can help you find food and water and they have an acute sense of orientation, so they can lead you home if you get lost. Dogs also keep you company, preventing loneliness and so on and so forth.

Basically, dogs are cool to have around, especially when it comes to survival situations. Okay, I am aware about a school of thought in the prepping community, a survival debate about “to dog or not to dog”.

Truth suffers if it’s over-analyzed, so  you’ll have to decide for yourself if a dog would be too much in a survival situation; if it would be another thing to take care of or vice-versa (if you ask me, I  think that the advantages of having a real dog in a SHTF situation outweigh the disadvantages).

In a SHTF scenario, you’ll be confronted with a lot of your own problems, so, what about your furry friend?

Today’s article will explore some options and scenarios involving survival foods for your dog. If you think that dog food is irrelevant in a survival situation, check this out: you can eat dog food if S really HTF. So, prepping with food for your precious companion is a double bang for your buck in terms of surviving. I bet you didn’t think of that before, did you?

Now, that we’ve established a clear premise, i.e. that you’ll still own a dog in the aftermath of the apocalypse, let’s explore a few possibilities in terms of survival dog food.

How and What to Feed Your Dog when SHTF?

The question becomes how and what to feed your dog when there’s no food at the pet-stores or in the groceries.

You have to realize that there were dogs around a long time ago, before Purina started making billions of dollars selling pet-food. Your grand-grandfather still had dogs and he fed them on a daily basis (hopefully). Therefore, so can you.

Dog nutrition is not rocket science, I mean our ancestors fed their dogs mostly with table scraps or they cooked their dog food using their own “recipes”. Back in the day, there weren’t hundreds of varieties of dog food at Wal-Mart for different types of dogs. For example, there was no special food for grumpy, lazy, fat, or thin specimens, like there are in present times.

Where am I going with this rationale, you may ask? Well, there are two possibilities for prepping with dog food for when SHTF; that’s what I am talking about.

The first option:  You can prepare for a bleak future with commercially available dog food. Stock it up to make provisions for your dogs. Dried dog food has up to ten years of shelf life, not to mention those “deluxe dog survival kits” and what not which can outlive the pyramids.

If you store the dried dog food properly, in a well-sealed container and in an optimum environment (stable temperatures, low humidity, no sunshine) I bet it will be still edible after more than a decade. The best thing about storing dried dog food is that you can eat it too, in case of emergencies. I mean, it’s better to eat dog food than to eat your dog or starve to death, isn’t it folks?

You can also prepare with specially formulated survival dog food, which is usually packed for long term storage in special Mylar bags that come in rodent-proof, water proof, stackable plastic buckets. It will cost you a few hundred dollars, but you can consider it an investment in your future (yours and your dog, that is).

The second option: Play it old school, like the founding fathers did. Making your own dog food is so simple that you’re going to ask yourself why you spent thousands of dollars until now on specially formulated, heavily processed, specially designed pet-chow instead of this.

How to Prepare a Complete Meal for Your Furry Friend

The most important thing to remember in this business is that dogs are omnivores just like us, not carnivores. That means they can be fed with virtually anything you eat. Okay, maybe except chocolate (it’s toxic for dogs because they lack an enzyme to digest it properly), coffee and cigarettes.

Dogs can be fed using all sorts of stuff beside meat. If you take a look at the listed ingredients in a dog food bag, you’ll understand the concept behind dog food. It’s a mixture of heavily processed meat (scraps, I bet) and veggies, plus synthetic vitamins and minerals. Feeding a dog with a protein-rich diet (meats mostly) will make him more aggressive and hyper active, so you must try to achieve an optimum balance of protein, carbs and fiber.

The most simple and nutritious recipe for DIYing dog food at your home is a mixture of rice (brown or white), protein (pork, chicken, game, tuna, beef or even eggs) and vegetables (peas, beans, carrots, or a mixture of these). The ingredients can be mixed roughly in thirds; I mean one part protein, one part veggies and one part rice. If you have a very active dog, you can put more rice in the mix.

The cheapest rice (also suitable for storing a long time) is available in places like Costco or other retail outlets (Amazon.com is a good idea too) and you should buy 25-50 pounds at once because it’s the most inexpensive solution.

Another reason to buy in bulk is that you can eat rice too. It’s quite nutritious, especially brown rice.  Rice and beans cooked together make for a complete protein i.e. a highly nutritious survival-food and, just like rice, dried beans can be stored for a long time and they’re dirt cheap if bough in large quantities.

The meat part is a tad more difficult; I mean if you want to store meats long term, you have two possibilities: to can them or to freeze them. The latter doesn’t have much to do with survival, as I imagine electricity would be the first thing to go when SHTF, so you’ll end up with large quantities of defrosting meat which will be inedible in a matter of hours or a couple of days.

Therefore, you’ll have to resort to canned meat, which is not as hard as it sounds. And you can make your own supplies in the process, that’s the “bang for your buck”  part I was talking about in the preamble of the article.

For my dog, I would try to can organ meats, as they’re highly nutritious and also very cheap. There’s another possibility: prepare large quantities of dog food using the aforementioned recipe, and can it for long-term storage.

Canning implies having a lot of glass-jars filled with the respective stuff (meats/prepared dog food) and using one of the two methods: boiling water bath or pressure caning. The boiling water method is the most simple and cheap, and boiling kills all the food induced illnesses and microorganisms that are abundant in most of the regular foods.

The pressure canning method requires a special device and it does basically the same thing, but using higher temperatures and pressures than the first method.

Obviously, in case of an emergency you can always feed your dog with leftovers or food scraps from your dinner; he won’t mind a bit, assuming that you actually have ingredients to make your own dinner.

If you have other ideas or methods about making or storing survival dog food, feel free to share them in the comment section below.