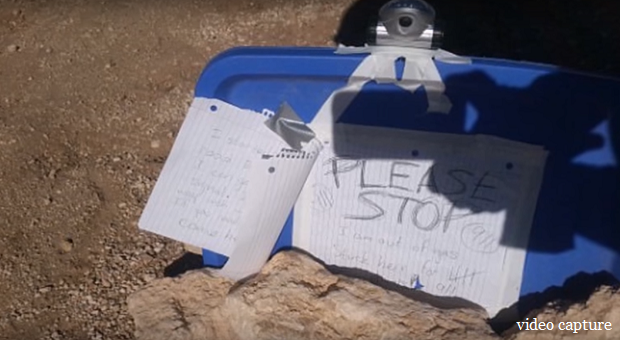 On March 12, 2017, Amber Van Hecke ran out of gas in the Havasupai Reservation while leaving the southern rim of the Grand Canyon.

The twenty-four year old college student was there hiking for spring break when her vacation turned deadly. Thanks to her own resourcefulness and preparedness, she lived to tell the tale.

So, what can we learn from Amber’s experience? We found 8 survival lessons to learn from her adventure, and we’ll take them one by one in the following article.

First, I’ll bring you up to speed on what happened, then we’ll get to that part.

Amber’s problem started when she plugged Havasu Falls Trail Head into Google Maps and followed the directions, just like the rest of us probably would. She only had 70 miles of fuel left until empty, not counting the reserves (so she thought) in her tank and decided to roll the dice because, according to Maps, it was only a 40-mile drive to the next main road.

She took a right turn when it told her to, even though her gut told her that it was too early. She found herself on what she calls a “ratchet dirt road” and followed it for 35 miles before her GPS told her to take a right onto a road that didn’t exist. Being a person fairly experienced with backroads, and considering the horrible road she was already on, she thought that maybe part of the road had eroded, so she took the turn, hoping to run into the remaining section of the road shortly.

Instead of finding a road, she ran straight into a fence. Amber admits she panicked a bit and drove around trying to find the road when she should have just stayed put. By then it was getting dark and she was down to zero miles to empty, and her reserves were empty, too. She found the nearest man-made structure and decided to wait til morning to decide what to do.

She certainly didn’t lack creativity or motivation, and she had food and water because she was planning a hike. She actually had extra, as any good prepper or trail-savvy person does.

This is when her 5-day period of waiting began. She had no cell signal, so she made an SOS sign from rocks that were about 4’x10’. That didn’t work, so she spelled out “HELP,” again using rocks, but this time she went big – her letters were 20-30 feet tall. She tried getting help using a signal fire, but because she was stuck in an extremely dry area, the wood burned too clean to create smoke.

After a truck drove right by her before she could flag him down, she barricaded the road (which was brilliant, actually, just in case). She had a flashing headlamp in her truck that she turned on at night, to no avail. Finally, after 5 days, she decided to take matters into her own hands and took off walking in an attempt to find a cell signal. Fortunately, she didn’t kill the battery in her car, so she was able to charge her phone.

She was smart about it, though. She left a detailed note with her vehicle, and she marked her trail. It said: “I started following the road EAST to see if I can get a cellphone signal. I am marking my way with white sports tape. If you read this, please come help me!”

After she’d walked 11 miles east of her vehicle and tried a whopping 76 times to get a call out she did manage to find a weak signal and contacted the Coconino County Sheriff’s Office. Her call dropped 49 seconds into the call and she couldn’t get another call out, so she just had to hope that they’d managed to locate her before the call dropped.

She walked almost all the way back to her car, but the helicopter did find her after searching with the limited information that they had. They spotted the glint off of her car and the help sign that she’d made. They also found her note and followed the direction that she said she’d gone in order to find her, and they succeeded.

Because she’d had a stockpile of water and food, she was in good shape when they found her. She rationed it because she didn’t know how long it would take, and she made ramen noodles on her dashboard.

With little to no injury, Amber survived because she was prepared and knew what to do in an emergency. Did she make mistakes? Yes, but don’t we all?

Just for those of you who need to know it:

Stranded with no way out =/= camping regardless of how well I prepared with my supplies.
I had a compass and I am fantastic at reading maps but I made the mistake of not bringing one this time.
Almost everyone has run out of gas at some point, mine just happened to be supremely inconvenient.
It was not a matter of simply turning around since I wasn’t aware how to get out and I was legitimately lost.

So, yes, I made silly mistakes. However, I also maintained composure when I found myself in an unfortunate situation…

Let’s look at what we can learn from her experience.

Don’t Depend Solely on Technology

Her gut told her she was turning too soon, and had she heeded that instead of doing what many of us are trained to do – trust that technology knows more than we do – she may have found her way and her story wouldn’t have been more than another leg of her travel plans.

Don’t Cut it Close on Fuel

Only having 70 miles left in your tank is just fine if you’re tooling around town or heading between one major town and another, where there are many opportunities to refuel. However, the US – especially the US West – still has many roads where there are at least 70 miles between gas stations.

As a woman who rides a bike, I have a standing rule – never turn down the opportunity to pee or get gas. It’s a good policy to follow, especially when you’re in a remote area.

Let’s see … what did she use that many people wouldn’t have necessarily had in their vehicles? A flashing headlamp. The materials to make a fire. White sports tape. Oh yeah, she had books that kept her occupied. Pen and paper. Food and water. A mobile cellphone charger.

Did they all work? No, but she had options and tools, and some of them – the charger, the food and water, and the pen and paper saved her life. Any one of them could have worked had the right person flown over or driven by at the right time.

She makes a comment at one point in an interview that she got bored and tooted her horn to make the coyotes leave the prairie dogs alone. What if she’d panicked and taken off walking in the dark? What if she’d made a wrong turn on her way back to her vehicle after she made the call because she didn’t mark her trail?

She did everything right when it came to this part of her experience. She stayed where she had shelter – there wasn’t anybody there to honk the horn to keep the coyotes off HER – and she marked her trail when she did leave so that she could find her way back.

She purportedly had sunflower seeds and an apple left when they found her. Those are foods that are high in sustained energy – the apple because it has fiber that slows down the digestion process, and the seeds because they have both fiber to slow down the processing of the sugar, and fat that your body will use after it uses the sugar.

Nobody wants you to get saved more than you do. She communicated: she made signs, she built a signal fire, and, when none of that worked, she got tired of waiting and took her fate into her own hands and decided to walk til she was able to help people help her. Don’t just sit around waiting for the cavalry when they may not even know you’re missing.

However, don’t screw up your chances by not communicating – in this case, had she not left the note, the rescuers may have missed her.

Keep Your Vehicle in Good Repair

Yes, she ran out of gas, but the rest of her car was in good repair and ready for a trip. Had her battery failed, she may still be sitting there, out of water and out of hope.

Yes, I realize that it’s easier said than done, but she admitted that she ran the last of her gas out because she panicked. Would it have made much difference in her case? Probably not. But what if it was the middle of winter, when temperatures can drop to the single digits in the desert? What if she’d been in Maine or North Dakota instead of in Arizona?

By panicking, she didn’t just run out her source of transportation, she exhausted a major heat source, too. True, she could have started a campfire, but that would have left her to the animals, that likely didn’t have granola bars, seeds, and apples stocked back. Keep your head and think before you act.

Amber survived this situation because she was prepared. Of course, she also got herself into it because, when it came to fuel, she made a mistake and went in unprepared. Her story offers dual lessons of what to do and what not to do. Thankfully, she did way more right than she did wrong, and that – along with a bit of luck – ensured that she lived to tell the tale!