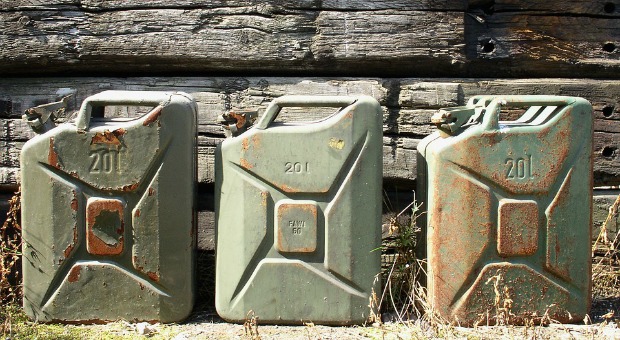 Whether you commute several hundred miles per week, or only just once per month, letting go of traveling by car doesn’t feel comfortable to anyone.

While it’s possible to make automobile fuel at home, there are some other options you can, and should consider. If one method does not appeal to you, others may also work and give you better options when it is impossible to buy gasoline or other fuel types.

How Easy is to Make Gasoline at Home?

Gasoline is made from petroleum, which is essentially the remains of living things that died thousands to millions of years ago.

Be prepared to face some problems with trying to make gasoline at home that is comparable to what you would get at the gas pump:

Simply put, making gasoline at home isn’t something you can do by yourself, nor can it be done at low cost or in a residential setting. While you may be able to make small amounts of biodiesel, or even a hydrogen based fuel, gasoline is likely to be out of your reach.

Start Off with Building a Steam Engine

Before you try to make any kind of fuel at home, think about how you can reconfigure the engine that powers your vehicle.

Historically speaking, the rise of the internal combustion engine didn’t come about just because this engine design worked better than the steam engine. Rather, it had to do with who got bank loans and how they marketed the product.

So if you are willing to change an existing vehicle in order to use homemade fuels, start off by converting to a steam engine. Making this change has its benefits, and here are just a few of them:

Today, it is virtually impossible to obtain a consumer level automobile that uses a steam engine. Researchers are still looking at steam engines and working on them, so you they might come back into style in the next few years.

Research on the patents and materials for steam engines, and start with simple ways to boil water with as little fuel as possible, if you are on a low budget. From there, you can move on to building up pressure from the steam, and then using that pressure to drive a piston.

Some people have successfully converted automobiles to run on steam engines, which is a perfect project to experiment with if you have a homestead or a farm. It may be hard to legally take your vehicle out on the roads, but things can easily change in a crisis situation.

Rely on Water for Hydrogen Fuels

Hydrogen fuels offer more promise for an alternative fuel than most other types because it can be made from water and also natural gas.

But remember that during crisis, you won’t find automobile fuel faster than water. Processing some fuels requires large volumes of water, which makes it even harder since water scarcity forces other priorities to the top of the list.

With just a few modifications to your car, you could use water (which is broken down into hydrogen and oxygen) to reduce the amount of gasoline you need to run the vehicle.

If you explore hydrogen fuels further, you might create your own fuel cell to run an electric motor. This is quite interesting if you have a hybrid vehicle.

Check these patents and devices for converting your vehicle to run on hydrogen, or for getting started to develop your own ideas.

As a note of caution, there are many people around the world trying to find a viable way to make vehicles run on water. Most systems either split water apart using hydrolysis, or they try to feed hydrogen and oxygen into the cylinder.

Before building something, check the viability of the plans you are looking at. Look or think about developing a system that pressurizes the oxygen first before attempting to use it to drive a piston.

If you need an electrical charge to drive a motor, look for ways to incorporate a joule thief or some other technology that will give you more current from what has already been produced.

Try to incorporate solar and other devices that can be used to generate power as opposed to simply relying on water or hydrogen. Generating heat to drive a steam engine would also be a viable answer.

If you have a “flex fuel vehicle”, or one that runs on diesel, then homemade biodiesel may be an option for you. Depending on the recipe, making biodiesel can be dangerous, so study your options carefully and take your time when building and working with your equipment.

There are three main ingredient types you will need for making biodiesel and you can make or obtain them all from natural resources:

A great deal of money and effort has been put into making fuels from corn and other crops that have a high sugar content. Typically, these crops are used to make large quantities of alcohol that can be mixed with gasoline in order to reduce the amount of petroleum used in the fuel.

While there are many problems associated with soil depletion and destruction of plant diversity (because GMO strains are used for fuel production), these fuels are, in my opinion, falsely touted as a viable alternative to petroleum products.

In the last few years, there has also been a push to develop fuels based on the extraction of oils from plants. For example, algae is seen as a viable source of fuel because a high percentage of the plant material is made up of oils. Some people claim that growing algae is hard, but actually extracting oil from algae can be a difficult and expensive process.

If you can get ahold of large amounts of algae, try and see for yourself if you can come up with a viable system.

In a collapsed world, the sheer amount of waste and chemical contamination of surface water will lead to all kinds of algae growth. Learning how to put this noxious stuff to good use for making fuel will be to your advantage.

The Overlooked Power of Natural Gas

Natural gas from compost and garbage dumps is truly one of the most overlooked sources of fuel in our country.

It is possible (but expensive and time consuming) to convert your vehicle to run on compressed natural gas (CNG) or liquid natural gas (LNG). Storing natural gas safely, and then compressing it enough to provide fuel for a decent driving distance are difficult too.

While there are a few cars made to burn this fuel in the United States, they are far more popular overseas. As prepper vehicles go, natural gas has more than enough power to operate the kind of engine that will be suitable for rough terrain, however refueling and storing natural gas can be a problem.

If you want to pursue this path, start of by seeing how much natural gas you can generate from compost piles and other renewable resources. Make sure that you can use the gas for other fuel needs such as cooking and heating your home, since you can use it for other purpose if it turns out that you cannot use natural gas to power a vehicle.

What About Magnet Based Propulsion?

The basic purpose of the engine is to make it possible for the surrounding vehicle to move, which requires a certain amount of power to overcome the effects of gravity. There are different methods that can be used to achieve this goal, and magnetic fields can also be used.

There are toys on the market that rely on reversals of the electromagnetic field between the base and an object in order to make the object float. The same principles are used to power some of the fastest commuter trains in the world.

If you’re interested in this topic, your main problem would be keeping the car moving without having a nearby rail or other source of switching current to work with. If you are interested in powering a vehicle for your homestead, you can build a grid to cover the local area.

Research on advances in wireless current transmission. We are still far away from the system envisioned by Tesla, but wireless power transmission can easily be used to power vehicles levitating in a magnetic field.

In some ways, building an engine for an automobile is not so different from building any other power generation system. At heart, both systems must generate some kind of spinning motion that will either push a vehicle forward or induce electrical current flow in a nearby coil.

Study different ways to induce current, and see if any of these devices can be used to build an automobile engine. For example, the Tesla Turbine can be run on compressed air, or even a steady stream of water.

As strange as it may sound, wind power may have far more to offer in terms of engine design than continuing with the concept of an internal combustion engine. Today, many materials can be used to make smaller and smaller wind turbines that may only require a tiny breeze or a slight shaking to produce an electrical current. Even sound or certain sound based vibrations in different media can be used to generate an electrical current that combines with other sources to run a motor, or even power a series of magnets that will enable the vehicle to break the bounds of gravity.

Remember, right now we are dealing with technologies that must overcome large amounts of weight. Simply put, the more weight you have to deal with, the more power it will take to overcome the effects of gravity. Look at lighter weight polymers and newer materials used to create both propulsion units and the surrounding vehicle.

Some situations can make traveling by automobile very expensive and complicated even on regular times. While a lack of gasoline is bound to be a problem in the post crisis world, trying to make gasoline at home is not a viable option.

There are other alternative fuel and engine design options that you can and should consider.

In most cases, coming up with something useful will take time and effort to come out with something sustainable and tangible, given the limited materials available to the average consumer in these times.