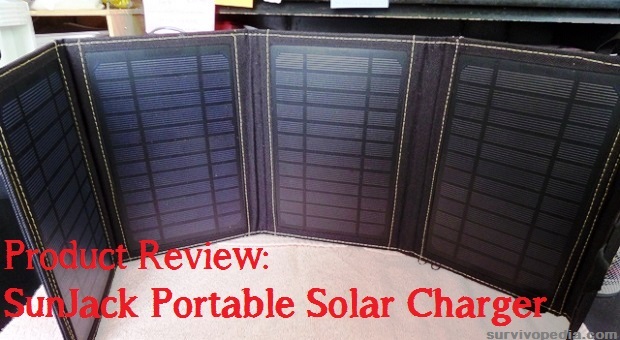 When you need large quantities of power fast, the last thing you will want to do is wait for a tiny device to take hours on end to provide 5 volts of power with sufficient amperage.

While these other devices have clear benefits, you will still need the SunJack or a similar device that is exclusively dedicated to generating power. This particular device can provide 5 volts of power at 2 amps for several hours efficiently and reliably.

The SunJack is made up of four solar panels organized in a black cloth foldable case. When closed, the entire unit measures approximately 6“ L x 9“ W x 1“ H, and then approximately 24 inches long when fully opened. The battery, charging cable, and USB ports are located in a mesh bag behind the charger.

You can purchase SunJack on amazon.com for $180.00 plus shipping, or go direct to the manufacturer’s site at thesunjack.com to purchase for $150.00.

In order to charge the battery, attach the cable to the battery and then use either USB 1 or USB 2 to connect the charger to the solar array. Once this is done, open the velcro cover and unfold the four panels so that they each get as much sun as possible.

Push the button on the battery pack, and then wait for all 5 LEDs to go on and stop blinking. At that point the battery is fully charged and ready to use. Simply plug up to two devices into the USB port located on the back panel of the battery and turn on the power button.

During the process of testing out the SunJack, I used a Soil Master 3 in 1 testing meter to determine light intensity. This unit repeatedly obtained full charge in 5 hours of light, and also supplied a steady level of energy regardless of USB devices attached.

I was able to charge a cell phone and camera, and also powered an LED light bulb for several hours.   Here are the power results I got: 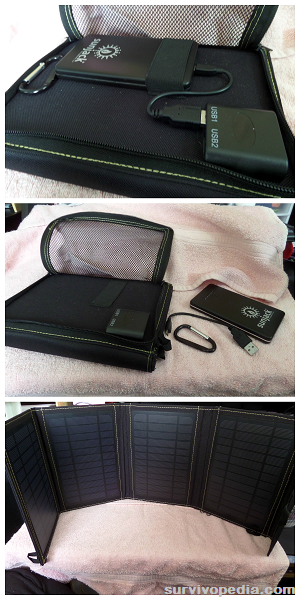 The SunJack offers a small package that provides a good bit of power. It is light weight, durable, and can easily be tucked into a backpack.

According to the manufacturer, the battery can be charged for at least 1000 cycles, and the solar panel will still produce 80% of the original power for at least 25 years. This particular model also offers:

Even though the SunJack offers plenty of power, I was mildly surprised to see that I was unable to attach the charging cord to the battery without removing the battery from its elastic holder. I could only achieve this by placing the battery in the opposite orientation, which then made it impossible to see the charging lights.

How It Can Be Used Now

Campers, hikers, photographers (especially if you are on vacation or at a special event where you cannot easily plug in a battery charger), or individuals that need to power a large number of USB devices on the run can make good use of the SunJack.

It can be placed in just about any sunny location and provide several hours of good quality power. You can also use the SunJack as a backup to your computer. For example, power hungry WiFi devices that have a USB connector can be powered by this device instead of running off the computer or wall outlet transformer.

What Makes It Best for Preppers

The SunJack is ideal for preppers that are concerned about keeping basic power available for small gadgets that offer communications and other advantages.

You can power cell phones, small radios and other 5v appliances discreetly and efficiently. Even if you need to keep the SunJack in a window on a cloudy day, it effectively gathers light that can be used to power your devices.

In closing, I rate the SunJack as a 9 on a scale of 1 to 10. It is versatile in terms of capacity to produce large amounts of power in a short period of time. I was also impressed by the battery and solar cell technologies which were developed with long term use in mind.

While I would love to see a conventional battery charger accessory for the SunJack, it’s not a deal breaker as there are plenty of other benefits to owning this device.

This article was written by Carmela Tyrell for Survivopedia.