PrepperCon 2016 promises the celebrity speakers, classes, vendors and attractions that one might expect from one of the nation’s (which means the world’s) largest survival expo’s, but with creative and competitive twists.

I attended PrepperCon 2015, which I reviewed for Survivopedia readers. I learned (while being interviewed on a live and archived PrepperCon Radio show) that PrepperCon’s CEO read my review of the 2015 Expo and took some feedback into consideration for this show.

When I review something, I have to do so critically and honestly. Even if that something is great, like the 2015 show was, know that I will still let you know what could have been better. I will keep that in mind as I critique the 2016 show.

This year’s celebs are:

Last year’s event was creative with a survival fashion show, and costume events that you would expect to see at ComicCon, the comic industry event that helped inspire PrepperCon.

PrepperCon 2016 promises to be no less creative, with attractions I have not yet seen at other survival shows so I’ll give them high marks for originality. Now we will have to see how well they are able to execute these ideas and how they are accepted by the preppers who attend.

Attractions are slated to include:

Classes will cover some 35 survival and emergency preparedness subjects, covering a surprising spectrum topics. I will be among them, in an EMP Survival Q&A where a crowd will batter me questions about EMP survival for an hour beginning at 2:00pm on Friday. If you can’t come or miss my class, email at [email protected] and I would be happy to answer your EMP survival questions too. 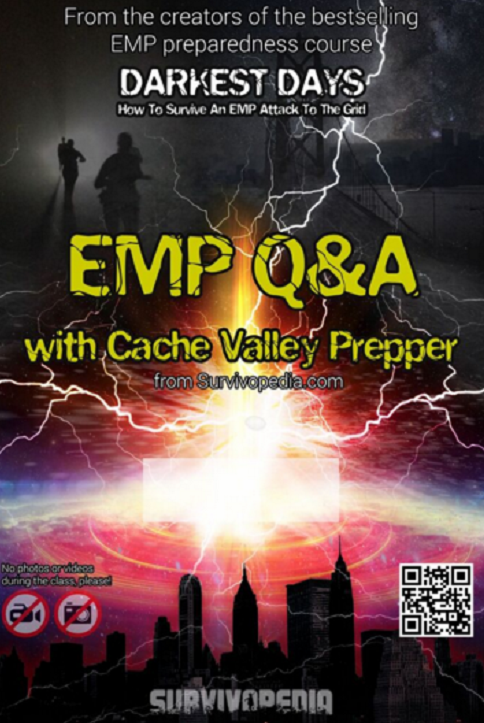 Attendees have to buy a ticket to get in, but once they do, most of the classes are free … mine included. Check the website for other classes though because some classes, such as concealed firearm permit courses, have to charge fees and limit the number of students.

The spirit of competition is apparently alive and well in Utah, because several of the events are competitive in nature. There is nothing wrong with getting the blood pumping at an expo. I am curious to see how these work out and what the participation level is.

Vendors fill the balance of any exposition and far more registered this year than last year.

I am glad to hear that because the vendors provide a lot of value for attendees and it is a sign that both the survival/self-reliance movement and the market that it drives are health and growing. Many businesses provide deep discounts and giveaways at survival expos so they are an important draw.

As the survival industry grows, who knows … maybe YOU too can “fire your boss and give yourself a raise” and work at something you are passionate about. It is a risk to turn your hobby into a business, but it is enabling many preppers to realize dreams of relocation into a simpler and better life.