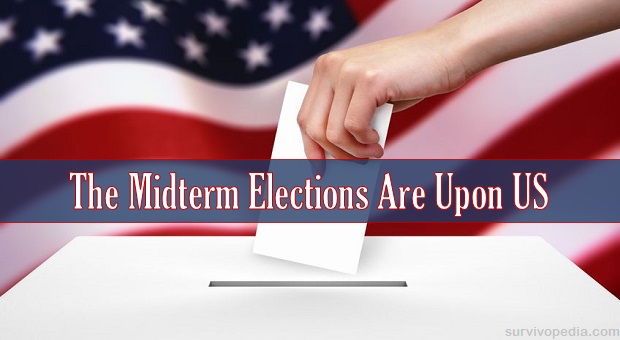 The Midterm Elections Are Upon Us

In just a few short days, the 2014 mid-term elections are going to be upon us. I hate to say it, because it seems like we’ve been saying it for every election lately, but these are the most important elections our nation has ever had.

But the reality is that as the two principal political parties are becoming more polarized, reflecting the very polarization of our society, each election does in fact become more critical than the last.

What makes it worse, for those of us who are conservatives, is that no matter how many elections we win and how many conservatives we manage to get into office, they are stuck fighting the liberal bureaucracy in Washington.

I often think that the biggest driving force for liberalism in this country isn’t the liberal politicians, the liberal celebrities or even the liberal press; it’s the liberals who populate the third political party – our government’s bureaucracy.

{adinserter emp}Nobody elects these people to office, but yet they hold tremendous power. Congress passes laws, but those laws are then interpreted by an army of bureaucrats, who turn the laws into regulations.

Most of the time, we deal with the regulations, not the laws. Regulations which are written by people who aren’t elected by anyone, aren’t beholden to anyone, yet hold incredible power.

A large part of the reason why the bureaucracy is liberal is that government work is more attractive to liberals than it is to conservatives. It gives them a way of being important and having power, without really having to accomplish anything. It also gives them control over other people’s lives, something that liberals love. We see that in their efforts to control guns and free speech. As they say, gun control isn’t about guns; it’s about control.

You see, one’s importance in the Washington power scene is based on two things: how close to the top you are and how many people you’ve got working for you. That encourages people in the government to build their own empires; because as their empire grows, they become more important.

How do you grow your empire? Developing new areas that your department has to control; creating new sub-agencies for your department and coming up with new “services” to offer.

This makes the government feed upon itself. Even if we didn’t have liberal politicians trying to take things over and make the government bigger, the bureaucracy would do it on its own. I suppose if left long enough, it would eventually take over the whole country, making everyone into government employees, even without an overt move to socialism.

So, if we have this liberal monster of bureaucracy, why do we need to even bother trying to get conservative politicians in office? After all, it sounds like we’ve already lost the war, no matter what we do.

While that may be true to some extent, the biggest reason we need conservatives in public office is that we need them to counter the influence of the liberal bureaucracy. Other than armed revolution to destroy the government and start over, the only way that We the People have of controlling that bureaucracy is through our elected officials. They can limit the growth of the government, if they’ve got the guts to fight for it.

Of course, they’re not going to have the guts to fight for it if we don’t let them know that’s what we want. We have to tell them in the voting booth, by voting for conservative candidates; and we have to tell them after they’re elected, by contacting them and telling them our opinion. That’s our responsibility as citizens and if we don’t do it, we have nobody to blame but ourselves.

President Obama started out with a Democrat Congress and used it to force Obamacare on us. In the 2010 midterms, the Democrats lost control of the House, but retained control of the Senate. Since then, Washington has been mostly in gridlock.

Obama’s idea of “working with” the Republican controlled House has been to demand that they do everything his way. His cohort, Harry Reid, the Speaker of the House, has worked very closely with him on that. Unless Republicans take over the Senate in this election, we can count on two more years of Washington gridlock.

Of course, the other option is that the Democrats take over both houses of Congress. If that happens, then I think we can kiss it all goodbye. With another two years of total Democrat control, the destruction of the United States will be complete. They will tax the middle class out of existence, tax the wealthy to the point of them all moving overseas and finish the job of turning this into the Socialist States of America.

The Right Thing to Do

That’s the choice; we either let the liberals trash this country or we take it back from them. We are once again on the brink of disaster; and it’s up to us to stop it. Even then, all we’re really going to do is postpone the disaster. To truly fix the country, we’ve got to wrest it out of the hands of the liberals and keep it controlled by conservatives for the next 20 years. Maybe then, we can save it.

That won’t change in one election cycle; it won’t change in four years. It will require a fundamental return to the will and intent of the founding fathers. That’s going to take time to happen.

We the People have a responsibility; that of governing those who govern this country. It’s time we did our job.