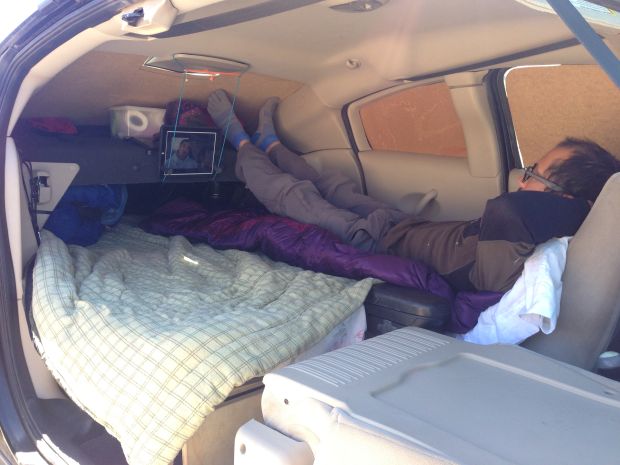 My Survival Story: Living In A Car For A Year

You have to sacrifice if you want to get ahead in life. That’s what I have learned after living in my car for over a year. It was a big lesson of survival that made me realize what a man is capable of when is following his dream.

From August 25th 2012 until over a year later, I slept and lived in my car, in Los Angeles, California. I moved to Los Angeles for a dream, but did not realize how expensive it was to live there. So I began planning in my head and thinking how I might save money and how I might get out of the frustrating living situation I was in at the time.

I decided living and sleeping in my car would be an idea that would satisfy both of those things I wanted for my life in Los Angeles. And it was truly a survival experience. Read another inspiring story on our article A Prepper’s Story: Headed To Alaska To Survive Off-grid.

I was doing this so I could save money and get ahead in life. I saved a great deal of money and had extra money I wouldn’t have had if I was paying rent somewhere. I would have had no money for anything else if I had to pay $1000 a month for rent like many others in Los Angeles. Read here our article on things to be aware of when relocating.

Especially in this economy today, you never know when hardship may hit and having these survival skills in your pocket may just save your life one day when you experience hardship. I did have a job and no one would have ever guessed I slept in my car and that is how it should be. More attention is worse when living in one’s car.

It was a very tough time as well. But it did in fact help me achieve my goals of saving money and being able to live on my “own” in my car. It didn’t come easy getting that life though. There were many learning experiences. And I began writing a book about how to survive living in one’s car.

I moved to Los Angeles and did not really know anyone. When I began sleeping in my car it was a scary time. I had no friends, and I knew if I tried to make some friends eventually they’d find out I lived in my car and wouldn’t accept me anyway. How would I get a date, I thought to myself? Who would date someone living in his car?

After a long day at work as a security guard, walking around, patrolling, writing reports, I would get off and have to go sit at McDonalds for a few hours until it got dark.

Many people complain because they are already so tired after a hard day at work. But then they get to go home and relax and lay down on the couch and talk to their friends or family.

After my long hard day, I could not just go lay down and relax somewhere. I always had to wait until it got dark outside before I could go to sleep at my spot.

There was no way to lay down in the back of my car while the sun was out. It was much too hot out to do that. I had to go sit in a fast food place around a bunch of strangers until it got dark.

It was tough not having anyone around to help me out and no one to hang out with in the beginning when I didn’t really know anyone. It was quite a lonely life. I felt like I constantly had to be on guard against everything.

I had to watch out for homeless people walking around the streets when I was going to the store to get some food. My back tail light was broken so I had to be careful not to get stopped by cops because it only drew more attention to myself. Though cops usually respected that I lived in my car anyway. The ones I came across.

Many times I was in the back of my car at night, with all my towels up over my windows, worried and wondering when I would get a break from all this. When I’d get to have a normal life and have friends and be able to come home watch TV and make a steak?

I cried a couple times in my car when I felt absolutely hopeless. But most of the time I was very thankful for the life I had. I was glad I had my car. I had a computer, I had a job. I essentially had everything I needed. I knew I had no reason to be ungrateful. I knew there were many others in Los Angeles and around the world who were a lot less fortunate than I was.

It did feel like a never ending cycle at times though. Doing the same thing every day. Alone.

I moved here to achieve a dream and I got this. It was rough. But I always tried to keep in mind how thankful I was for everything I had.

What It Takes to Survive when Living in a Car?

There are many important aspects to surviving living in one’s car. The key thing I found to living in my car successfully was keeping a low profile in all I did. That way, I could have the longevity to stay in my car as long as I needed to.

How to Get Your Food

When it comes to food, there are many options when living in your car. My purpose living in my car was saving as much money as I could. So I keep that in mind when thinking about food.

Where to sleep is probably one of the key elements of surviving when living in your car.

A good sleeping area can make or break you living in your car. You have to find a place that is safe but also a place where you can stay on the down-low enough to not be noticed.

I personally slept at a 24-hour grocery store I used to work at. I lucked out, but I’d say if you can manage to sleep at a 24-hour store somewhere that would be good. Or in a neighborhood that is safe where you can stay under the radar.

Once you do find that place you have to make sure to do everything you can not to be noticed.

Also your car has to be primed and ready.

I had dark tint on my windows some of the time I slept in my car. If you don’t, you can put dark towels up in front of all windows. You have to be conspicuous though and make sure no one is around when you put them up. Just go to your spot, park, shut the car off and set the towels up. That is what I did.

Make sure you choose the same place for sleeping every night. It makes things a lot easier. Don’t tell anyone where you sleep.

Where to Take Showers

Keeping your hygiene good is absolutely key to sleeping and living in your car and staying unnoticed.

The more you are noticed the worse it is for you, so you have to keep the appearance of a normal person living in a normal house. In other words, you have to give an appearance you are not homeless, or you will be kicked out of a lot of places you may hang out at.

I took showers at a gym. I got a monthly gym membership. It was only $40 a month, so it was not much. I got to both work out and get clean. I recommend having a backpack with everything you need for the shower and a combination lock to lock up your stuff while you are in the shower.

Where to Spend Your Spare Time At

There are a few options of where to hang out on your day off work or when you have free time.

Also, if you have made any friends or anything like that, then that will help a ton as well.

Key Items You Need to Keep in Your Car

Overall, it was sort of an adventure living in my car. I learned a lot. I became a lot stronger than I had been before I came to Los Angeles and lived in my car. It made me realize what I am capable of. That people can adapt to any situation.

Advice for anyone sleeping in their car or homeless would be that you have to stay mentally strong and continually aware and focused of everyone and everything around you. Pray a lot. Keep your head up. Always know it is not forever and it’s only a temporary situation. You will get out eventually.

This article has been written by J. C. for Survivopedia.

J. C. grew up in Tucson, Arizona with a twin brother and a little sister. He attended Arizona State University and received a degree in Nutrition Management in 2010. He moved to Los Angeles to pursue a career in acting. He has been on CSI Las Vegas as a SWAT Officer and on a new TV Pilot playing a security officer. He currently resides in Hollywood, California.