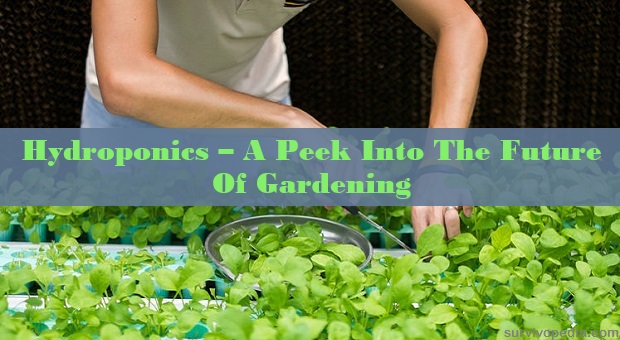 Hydroponics – A Peek Into The Future Of Gardening

We all know the possible disasters that could befall the world we live in. Drought, plague, nuclear war, biological warfare, the seven horsemen of the apocalypse…  etc. I don’t need to paint a picture of the terrors and chaos that could befall us all.

You are among the small group of people who have cosen to plan and prepare as best you can for disaster. You, preppers, have chosen to take control of your fate and act now rather than be caught in the tangle of misfortunes that is sure to overtake the rest.

You have equipped yourself with a variety of tools and skills – from basic outdoors skills, to hunting, building, food preservation, and more. Though difficult to do with unknown scenarios, you work to pin down a survival strategy and lay up supplies.

The future is unclear, so the best thing you can do is learn more than your anticipated scenario calls for. Learn as much as you can, and hopefully it will be enough to keep you alive. Have a fluid plan. With a bit of luck, you will be able to respond to the apocalypse well enough to survive.

A justifiable assumption is that the food market will have undergone a massive change if not complete collapse. Fresh food will be hard to come by, and while everyone loves MRE’s (not), even rations have nutritional limitations, and fresh food is necessary to health. In a world that is void of readily available modern medicine and flushed with disease, there is no margin for error with your health.

The bottom line is that you will need an alternative source of fresh food. The solution? Grow your own. Of course, different scenarios place different parameters on how we are able to grow food. The possible scenarios vary greatly, but there are several common themes. Let’s talk about five likely problems and how they could be solved.

Lack of space could be caused by terrain characteristics or by confinement. Terrain can limit your available space by being rough or wooded. (For example, if you are living in a forest or very mountainous area, the space that you want to use for agriculture will have to be leveled or cleared first. That will take at least one growing season, if not more.) 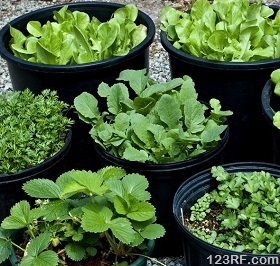 A lot of people think that they’ll be fine with their 10 X 10 foot garden in their back yard, but you need around half an acre of land (sometimes more) to grow enough food for one person. Your little veggie garden isn’t going to be enough.

The fact is that outside growing might not be a possibility at all. In the case of biological attacks, nuclear war, or plague, quarantine protocol may be necessary.

For those of you who have prepared a shelter or quarantine space, you may not be able to venture outside for some time due to lingering radiation of other harmful agents. In this case, you will be recycling air and water, trying to make do with finite resources in a small space.

If you can’t grow food outside, what is your plan B? You can only store food for a certain amount of time, and most apocalyptic events have long, if not indefinite, timelines.

Nuclear radiation takes decades (if not centuries) to fade to a habitable level again, and in the case of a plague or biological warfare, medical research would need to be done. (In the movies, a cure is always found in weeks or hours, but that is simply unrealistic. Medical research to develop a cure for a new disease or virus takes years and years.) Can you store food to last you twenty years? Fifty years? No.

We need to find a low-input and low-space food alternative. Unfortunately, a low-input food synthesizer (Earl Grey, Hot, anyone?) has not been invented yet, so we revert back to growing. But that doesn’t mean that we have to revert back to horizontal growing in soil.

You can forget about soil. Lack of uncontaminated soil is a possibility that is rarely addressed but could be extremely problematic. Many catastrophic events are likely to result in soil contamination by dangerous biological or chemical agents, heavy metals, or radiation.

While soil substitutes such as vermicompost, stored peat, potting soil, and sawdust could be practical on a very small scale (such as growing seedlings), the fertility requirements of traditional horizontal agriculture are extremely high.

Plants need nutrients. Humans have always relied on the soil to fill that nutrient need. But when soil is no longer available, an alternative growing medium must be found.

The mindset of modern agriculture, limited as it is to horizontal soil growing, could get you killed if you can’t force yourself to think outside of the box. Lucky for you, that’s your forte. (If you didn’t think outside the box, you wouldn’t be reading this, would you?)

So, thinking outside of the Box. To be clear, the Box is “horizontal growing”. The Box is “plants in soil”. Get rid of those ideas. We don’t have the luxury of space, as we have already discussed. We need to get more than one layer of plants growing in the same square footage.

We need a growing system that uses more than the foot or two above the floor. We need to utilize as much space as we have, from floor to ceiling.

Have any ideas yet? We do.

Actually, we designed our own solution to the problem. We didn’t think it made any sense to answer two problems with two answers when you could answer them with one. See, the two requirements- which are vertical space use and soil-less growing – have already been developed into growing techniques, but only one at a time, and neither are practical on a large scale.

Vertical farming has been used, and soil-less growing has been used. We thought, “why not hit two birds with one stone?” and we made a tool that hybridized the two techniques. This union of agricultural innovations is called vertical hydroponics, a technique used to maximize space without sacrificing quality.

When done correctly, vertical hydroponics can yield three to five times the produce as soil agriculture while using 5% of the water. To achieve these goals, you need to use growing tools that are well thought out. The best hydroponic tool on the market is ZipGrow towers.

The towers stand vertically, so you are utilizing the floor-to-ceiling space. They are customizable, so you can order them specifically to fit your shelter or quarantine container without wasting any space. The plants grow in a safe spun plastic media so no soil is needed.

Instead, the nutrients are delivered in the water that runs through the media. Nutrient solutions can be stored as dry powders with an indefinite shelf life, so you aren’t depending on a fertilizer product that could go bad.

Did I say two birds with one stone? I miscounted.

The third problem that can be addressed with vertical hydroponics is the lack of safe water. ZipGrow towers are run on recirculating hydroponics plumbing; the water is recycled, so you aren’t wasting any.

In a situation where water has been contaminated by biological agents or chemical poisons, water use efficiency is critical. Traditional agriculture uses sprinklers, flood irrigation, or drip lines to water plants. Then the unused water evaporates or sinks into the earth, never to be reclaimed by the farmer again- it’s lost in huge amounts.

That’s just not going to work in a situation where water is limited. You will be using saved water. (If you are lucky, it will be possible to distill water, but distillation takes time and space, and the amount of water distilled will be low.) 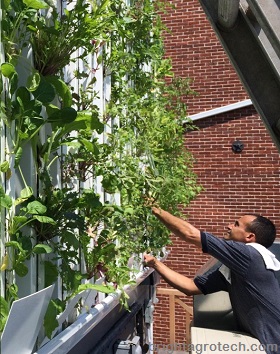 With hydroponics, the only water loss possible is through evaporation- and in a sealed environment, you could take measures to recapture it and reuse it so that not a drop goes unaccounted for. In fact, hydroponics uses 5% of the water that soil gardening does.

What’s the tally for vertical hydroponics now? Saves space, no soil necessary, and has low water requirements. Three out of five. But what about the other two likely problems?

Electricity will be precious. Who knows how badly the electrical system will be crippled? Even without direct damage, the people who maintain the electrical system may be driven away or killed. What then? Odds are that you’ll be dependent on your own sources of energy such as emergency generators, turbines, or solar panels.

Temperature control will be relatively supplemental, as the amount of thermal mass is increases and the media acts as a conduit between thermal mass and root zones. Of course, if your system is in a greenhouse, lighting costs are also eliminated.

Let’s talk about security, a top concern in the minds of many preppers. All it takes is a little imagination to anticipate what humans would be like after catastrophe struck. In a world full desperate people, all on an urgent mission to survive, ethical reasoning will become a luxury.

Like it or not, impossible circumstances change the way that people think and act. Thievery would be commonplace, and if you have a resource that others do not, you will be a target. Growing out in the open draws attention.

Larger areas are difficult to defend. Put the two together, and you’re practically asking for thieves to give you a visit if you grow in a field. If you are growing in a small space that’s hidden away in a shelter or underground, however, you employ the old concept, “out of sight, out of mind” and avoid unwelcome visitors. If somehow your set-up is discovered, it is now much more defendable.

Over all, vertical hydroponics could be the most logical tool to use when SHTF. It has low water, space, and electricity needs, is easier to defend, and doesn’t make you rely on soil to feed yourself.

Many preppers who prepare for a traumatic event count on hunting as a source of protein, but this may not be a viable option. In areas where wildlife is affected by radiation or has been over-hunted, or if land with game animals is protected by other parties, hunting opportunities may be limited or nonexistent.

If that happens, where will you get protein? Many crops provide an adequate source of protein, but what if you could have the best of both worlds- healthy crops and animals?

Aquaponics is the combination of aquaculture (fish farming) and hydroponics (farming without soil). Using aquaponics, you can both grow healthier crops but raise fish, and have a more sustainable system because of it. Read up on aquaponics at Brightagrotech.com.

This article has been written by Amy Storey for Survivopedia.

Amy Storey is Content Coordinator and Customer Experience Manager at Bright Agrotech, a vertical farming business that works to empower farmers to change the face of the agricultural industry. Amy works to support growers of all kinds and to inspire them to take part in the innovative movement of vertical farming. Amy lives in Laramie, Wyoming.