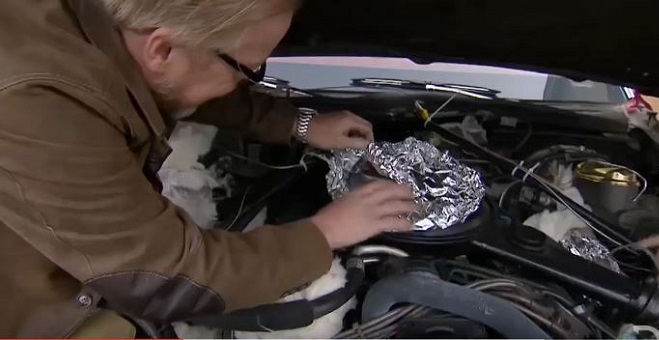 How to Use Your Car for Cooking Off-grid

Your car gets you from point A to point B. It may give you a thrill when you rev the engine and it allows you to carry all sorts of stuff, like groceries, kids and luggage. But can it cook for you, too!

As a matter of fact it can! It’s actually not a new concept – people have been doing it for just about as long as cars have been on the road but it’s re-emerging as a great alternate resource for cooking in a survival situation. Carbequing is the topic today!

It’s becoming so popular that Alton Brown teamed up with Myth Busters to see if it’s actually possible (like we needed the theory tested!) and they ended up cooking an entire Thanksgiving dinner by using the areas around the manifold as well as utilizing the area underneath around the exhaust. All they did was wrap it in foil, rig up a special pan to hold it near the exhaust, and a meal was born!

So how, exactly can you do it, and what can you cook? Well, the answer to the latter question is that you can cook everything from a pot roast to an apple pie.

The only problem that I see with this is that it takes a while and if fuel is at a premium in a SHTF scenario, you’ll be wasting fuel that you may not have to spare.

If the emergency isn’t going to last more than a couple of days and you have a full tank of gas, then it may just be worth it if you don’t have another source of cooking.  If the emergency is going to take longer than that and you’re hunkering down and saving your fuel, then maybe not.

Another scenario where it’s feasible is if you’re bugging out in your car. In that case, it’s a free resource because you’re going to be driving anyway; after all, multi-use is the prepper’s way! You can warm up a can of soup or cook some hot dogs in just a short trip, but if you’re cooking something like a pot roast, it’s going to take an hour or two of driving, or letting the car idle up to temperature, then leave it running.

Cooking on an engine block takes longer than traditional cooking but not as long as using a slow cooker, so time your meals accordingly. Make sure that your meat reached the internal temperature appropriate for the type so that you don’t run the chance of getting food poisoning, especially with fowl.

We’re going to provide some recipes below, but if you want the know-all, be-all book on the subject, pick up a copy of Manifold Destiny. I don’t believe that it’s in print anymore but you can get a used copy on Amazon, or a Kindle version.

Preparing Food for Cooking on an Engine Block

First, prepare the food as if you’re going to cook it on a grill or in the oven. Spice it the same way and then wrap it in aluminum foil. Use the heavy-duty kind so that you don’t risk ripping it and starting a grease smoking fest under your hood! As a matter of fact, I’d use two or three layers of it just to be sure.

Make sure that the sides are long enough that you can pull them together and roll it down a few times. Leave enough space on each end to do the same. You’ll be cooking it basically in its own steam so you want to make sure that no air escapes.

Tip: Spray the foil with some cooking spray or wipe it with some oil to help keep the food from sticking, just like you would if you were putting it on the grill or in the oven.

Finding the Hot Spots on the Engine

You can’t just toss your food under the hood in any ole place and expect it to cook. If you’re not familiar with the parts of the motor that get the hottest, start your car and either drive it for a few minutes or let it sit and warm up for 10 minutes or so.

Turn off the car and open the hood. Feel around with your hand hovering over the motor two or three inches to find where it’s hottest. Some sites tell you to touch it to find the hottest parts but take it from a girl who knows her way around a motor – that’s a sure-fire way to end up with some bad burns.

If you find a spot that is putting off enough heat that you wouldn’t want to touch it with your fingers, that’s a sweet spot. If it feels cool enough that you feel as if you could touch it without being burned, it won’t get hot enough to cook your food.

The best place, if you can get to it, is near the exhaust manifold – the place where your exhaust pipes come out of the motor. If you’re going to be driving while your food is cooking, make sure that the spot you choose is tight enough that your food will fit in without falling out. This isn’t so important if you’re cooking while the car is still.

You can test this by wadding up some foil that’s the same size as your food packet and putting it in that spot. If it fits snugly, you’ve got a winning spot. A good reason for using a test piece is to make sure that your hood will close without smashing your food. You need enough clearance to be able to shut the hood whether you’re traveling or not – it holds the heat in.

If you want to get really fancy, you can also secure your food underneath your car on or near the exhaust pipes. I wouldn’t recommend putting it directly on the pipes because that reaches temperatures that are way too hot. You’ll burn the outside of the food before the inside is cooked.

Securing Your Food to Cook on the Engine

You want to make sure that your food isn’t going to fall out if you’re traveling, or even if it’s in a spot where you think it might fall out at a stand-still. You can do this by tucking it under some hoses, or you can secure it with some wire. Don’t use rope or anything else that can’t withstand high temperatures or else you’ll run the risk of either melting it or catching it on fire. Neither scenario is good!

If you’re using a spot underneath the car, you can rig up a pan. The best way to explain this is to let you watch this video of Alton Brown and the Myth Buster guys doing it. You’re now ready to cook!

And a Few Recipes for Carbequing

Here are a few good recipes to get you started.

Wash and cut the potatoes (or more depending on how many you need and what your space limitations are). Cut them into squares about ¾ inch. Place them in a bowl, drizzle the oil or melted butter on them, then add the seasonings. Stir or toss to coat. Prepare your foil, then wrap the potatoes in the foil as described above. Place on your hot spot on your motor and cook for 25-30 minutes.

Place your turkey or chicken on the greased foil. Sprinkle the seasonings on each side. Seal the foil as described above and place on the hot spot on your motor. Allow to cook 45 minutes if sitting still or an hour if driving. Check internal temperature using a food thermometer. It needs to be 165 degrees at the center to ensure that all bacteria are dead. E-coli sucks.

Prepare foil as described above. Lay the salmon filet on the foil and sprinkle the rest of the ingredients over it. Wrap in foil and place on your engine’s hot spot for 15 minutes if sitting around or 20 minutes if driving. If you’d like to make a complete meal out of it, you can always add some green beans or other veggies in there, too. If you’re using frozen veggies, allow for a few minutes extra cook time.

This recipe only works if it’s really hot outside – say 90 degrees – so that the inside of your car gets hot enough (160 degrees) to bake the cookies and kill any salmonella from the eggs. Place the cookie dough on a cookie sheet just like you would if you were baking them in the oven, though you may want to squish them a bit flatter.

Place on your dashboard, preferably in the sun, and shut your car doors so that the heat is trapped in. Leave them alone for about an hour. They won’t brown much but they will cook. Check them after an hour and if they feel done, remove. If not, leave them in there and check every 15 minutes or so.

Alternative: Place the cookie sheet on your manifold and close the hood, making sure that they don’t touch the underside of the hood. Cook on a hot engine for 8-10 minutes.

These are just a few ideas to get you started with using your car for cooking.

Play around with other meals and if you have any good recipe suggestions, add them in the comments section below!