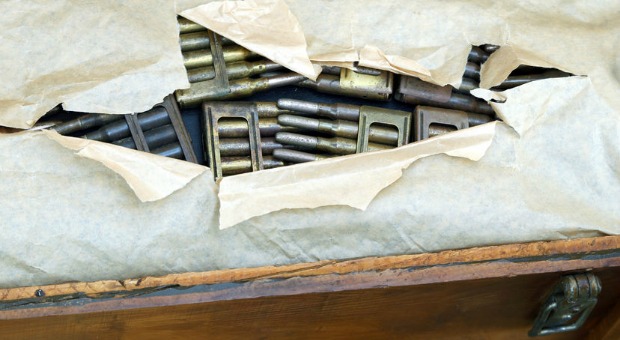 How To Protect Your Ammo Stockpile

Even though you make every effort to become self sufficient, there are some things that cannot be made without a good bit of help from modern tools and equipment. Some of the best ammunition in the world will no longer be available once society collapses and the technology and skills are lost for making it.

Under these circumstances, you may feel that it is best to store away as much ammo as possible. At the very least, if you have a bigger stockpile left, there is a chance that you or your survivors can command greater resources once societies begin to form again.

In the meantime, storing ammo properly is also very important so that you will be prepared for smaller emergencies that require the use of the items in your stockpile.

Here are some basic guidelines for keeping your ammunition safe in a world where new technologies may make it a bit more complicated than expected.

Ground penetrating radars, X-ray scanners, satellites, and other devices make it very hard to hide metallic objects even in your own home or in the ground beneath it. This, in turn, means that making ammo invisible will be harder than you may have expected. Here are some things you can try:

One of the most important, but overlooked aspects of ammo stockpiling is making sure that you can move everything around with ease.  Here are some things you can do to make the task easier:

It is true that nuclear blasts and EMPs cannot directly cause primers to explode or gunpowder to ignite. EMPs are well known for causing fires.

If you have ammo cans stored near wires, cables, or anything else that might burn up from the EMP, then the heat from that fire may be enough to cause the ammo to explode. The thermal wave from a nuclear blast and the fires caused by it can also affect ammo in a harmful way.

There is only one real way to prevent EMPs and nuclear blasts from ruining your ammo supply. As with protecting yourself, all of your ammo will have to be stored in an underground bunker or shelter. Never hesitate to build additional tunnels or layers of tunnels so that you can move the ammo around underground.

If you cannot store ammo underground, then you can still take some steps to reduce the risk of ammo related explosions caused by an EMP. If you decide to stash ammo in the walls of your home make sure that the cans are far enough away from electrical wiring, metal pipes, or anything else that might conduct electricity. You should also avoid storing ammo in any location where only a bit of plaster or wood stands between an electrical appliance and the ammo hiding in the wall.

When storing ammo in a bug out bag, make sure that all electronic devices and conductive materials are stored away in EMP proof bags. As long as no fires start in the bug out bag, and everything stays cool and dry, then the ammo should also remain safe.

There are many different ways to safeguard your ammo stockpile. If you are prepping with a group, then you can always look for way to use conventional guard duty systems. That being said, no matter how much you trust the people around you, it never hurts to have a few hidden caches of ammo that only you know about.

If you have ammo stored in remote locations, the geography of the region itself should be able to deter electronic scanners and curious people. While you may not be able to actively patrol these areas, you should still be able to draw adversaries into fire zones or use traps to neutralize them.

When setting traps in areas you don’t plan on visiting very often, just make sure you remember what you did. There are few things worse in life than going to a cave where you hid some ammo, only to wind up hung up by a snare you set in front of the entrance, and then forgot about.

Depending on the location of your stockpile, some defense methods may be more feasible than others. For example, if you rent an apartment, or have very little room to hide ammo, then decoys, distractions, and diversions may offer some viable options.

Consider a situation where you have only one room suitable for storing ammo, you can still put one can in plain view. Even if it is empty, the invader may well move over to that can first. From there, you can choose any number of actions.

First, you can detonate traps that will prevent the invader from taking further action. If there is more than one person, you may want to use this diversion to grab your bug out bag and run. Should you be fortunate enough to have several minutes to make your escape, then you can always try to move one or two ammo cans to your bug out vehicle.

Without a question, if you have been drilling on moving ammo from one place to another, you will know pretty much how long it takes and then make your decision from there. If you feel that you cannot get the ammo out in time, it is truly better to escape with your life rather than lose it for the sake of a few rounds of ammo.

At its simplest, you can keep your ammo storage plans to choosing airtight and waterproof cans that will be stored away in a cool, dry location.

As a prepper, however, it is also important to be able to move, manage, and care for your stockpile even in extreme circumstances. Being able to effectively hide ammo, move it around, and use simple tools will all make it easier to have plenty of ammo on hand for years to come.

Keeping up with electronic technologies and polymers will also go a long way towards helping you keep your stockpile safe, sound, and in good condition.

No matter whether you are storing rounds or gunpowder, following some basic rules and maintaining a good level of stockpile awareness will truly be of immense benefit.