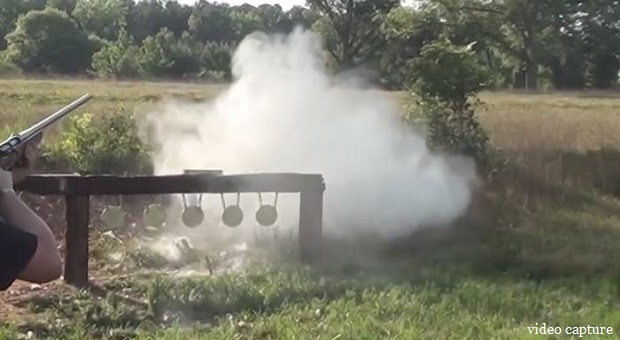 Survival Home Defense: How To Make A Flour Bomb

While making artisanal bombs at home may end up in a visit from your local FBI office, with agents Scully and Mulder asking you weird questions about your internet surfing habits, mastering the dark arts of home-made explosives might come pretty handy at some strange moment in one’s life; I mean, who knows what the future brings?

Life is stranger than fiction and maybe someday you’ll be required to blow stuff up for the resistance, or to plant some mines on your survival corn field, waiting for those pesky scavengers to trip on your traps and get lit up like on the 4th of July.

Joke aside, it’s pretty easy to make artisanal flour bombs for your home defense, provided you know your chemistry. Let’s see the magic of it!

If you’ve seen that awesome movie about anarchy as an ideology, you’re probably aware of the fact that if you know how to make soap at home, you’re a certified chemist. And to make soap, you must first render fat. The thing is, with enough soap, you can basically blow up just about anything.

If you have the recipe for  home-made soap, take a load of this: once the tallow hardens, you can skim off a layer of glycerin. If you add to that some nitric acid, you got, well, basically nitroglycerin, check out that bad boy. If you add some sodium nitrate and a pinch of sawdust, you’ll be as smart as Alfred Nobel. You know, the dude who invented dynamite.

But enough of this already.

If you are wondering what I am talking about, a dust explosion (the rapid combustion of particles which are suspended in the air) occurs when a dispersed powdered combustible material (flour, powdered sugar, , coal dust or whatever) is present in high enough concentration in an oxygen (or other oxidizing gaseous medium) rich environment.

Dust explosions happen due to the fact that compared to their mass, dusts have a huge surface area and burning only occurs at the surface of a liquid/solid, where the reaction with oxygen takes place, thus dust is way more flammable than bulk stuff.

Dust explosions are very dangerous, especially in industrial environments, as they spontaneously appear in grain elevators and coal mines (due to coal dust).

Pyrotechnicians, filmmakers and special-effect artists are relying on dust explosions on a regular basis, due to their spectacular appearance  and also the fact that dust explosions can be safely contained in a tightly controlled environment.

What you must know about dust explosions is that if they take place in a confined environment, they can cause massive damage and flying shrapnel due to the enormous overpressures that build up following the shockwave which occurs after the initial detonation. The shockwave will be produced anyway, both in open air or in a confined space.

How to Make a Flour Bomb

To create a dust explosion, you’ll require 4 things: a combustible dust, in our case flour and/or powdered sugar, a high enough concentration of the respective dust to be suspended in the air, an oxidant (in our case, the oxygen in the atmosphere) and finally, an ignition source.

The thing about flour is that it’s made up of starch mostly. Starch is a carbohydrate, which is a sort of sugar-molecule chained in a weird way (compared to regular sugar), and anyone who ever lit a marshmallow on fire is aware that sugar burns fairly easy. And obviously, the same principle applies to flour.

To begin with, here’s a flour and powdered sugar experiment, which results in cool outdoor explosions. These guys got their idea about experimenting with home-made explosives after hearing a story about a sugar factory which blew its roof off after a guy lit his cigarette inside.

There were so much sugar particles floating around in the air, that a flame occurred (via the cigarette), which caused a concussion that lifted the roof up and blew the windows out. So, keep in mind, these things (dust explosions) are very dangerous in confined spaces, i.e. always experiment with dust explosions outdoors.

For our first DIY dust-explosion project, you’ll require all purpose flour, powdered sugar, a flare and tannerite. Oh, and a 12 gauge shotgun (38 inch barrel), or at least that’s what these guys use. The end result is spectacular, but I won’t spoil it for you, just check out the video.

The second experiment is more dangerous as it’s performed inside a home-made (improvised) chemistry lab (or so it appears).

This is basically a flour bomb demonstration, involving a paint can as a closed receptacle (it has the lid on, which makes for a confined space dust explosion), flour (the inflammable stuff for the dust explosion to occur), and a lit candle. Oh, and a pair of safety goggles.

The DIY job is as simple as it gets: the tin can must come with a relatively tight lid, and a hole must be drilled at the lowest point in the can’s side wall, large enough to fit a straw. In the next step, put a handful of flour inside the can and then place the lit candle inside.

Now it’s time to put your safety goggles on. Insert the straw in the can, close the lid and blow through the straw at the base of the can, so the flour stirs up inside, hopefully without extinguishing the candle.

This experiment is very neat for chemistry demonstrations regarding surface area reaction rates, but if you’re not paying attention and you’re a total amateur, you may end up with your ceiling requiring some repairs. Oh, and a very cool bang.

Unlike the guy in our experiment, don’t forget to put the goggles on, for safety reasons. Truth be told, these types of experiments should never be performed inside your house, as I already told you. Always play with fire outdoors, away from anything flammable.

Playing with chemicals is pretty dangerous stuff, but also massive fun if done nice and proper. Take care not to blow yourself up while preparing your home defense with these bombs!

I hope the article was as fun for you to read as it was for me to write. Feel free to comment if you have other ideas in the dedicated section below!