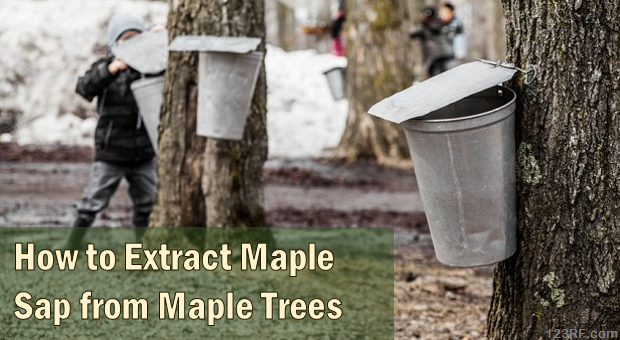 How To Extract Maple Sap From Maple Trees

Practically everybody loves it: that rich, delicious, sticky manna known as maple syrup. It graces our pancakes and adds distinctive flavor to recipes. It’s an all-natural sweetener that keeps for a very long time, especially if you refrigerate it after you open it.

Unopened, it will last for years if it was sealed properly. But how do you extract maple sap from trees? Actually, it’s not as hard as you may think, though it is a bit labor-intensive.

The History of Extracting Sap from Maple Trees

{adinserter emp}This practice is most certainly a North American tradition. Native Americans used to gather sap from the trees by making gashes in it. Settlers (or maybe the Native Americans) evolved the process to include a drilled hole with a wooden spout that allowed the sap to run straight into a bucket. Next came metal spouts and spigots.

Commercial production, and even many individuals now use a piece of PVC or a specially-made spile that connects to tubing that runs into buckets or a central piping setup that runs straight to a “sugar house.”

What Trees are used for Maple Syrup?

All living trees have sap but there are only certain ones that have sap that tastes good. The tree needs to produce a sap that 2% sugar or higher. The most popular trees to make maple syrup from are the sugar maple, the red maple, the black maple, the silver maple and the box elder, in that order.

You can also tap Birch trees but the syrup tastes much different and you need more than twice as much sap to make the same amount of syrup. It’s primarily fructose syrup, versus the sucrose that a maple secretes and tastes similar to horehound or sorghum. Sycamore, walnut and hickory trees make good syrup, too, though they’ll taste different.

Trees need to be at least 12 inches in diameter before you tap them. Fun fact: they’re about 40 years old by the time they reach that size!

Equipment Needed to Tap the Tree

You don’t need any specialized equipment, really. You probably have almost everything that you need lying around the house.

You’ll need a drill or an auger, some tape to mark the drill bit with, a piece of PVC that’s ½-inch in diameter (or whatever you want to use as the tap – you can buy actual taps, or spiles, made for this, or you can make your own), a mallet or hammer, and a bucket or other collection container.

Milk jugs or even 2 liter soda bottles work to collect the sap, though you’ll have to check them a couple times a day because they’ll fill quickly if the sap is running well. 5-gallon buckets with lids are better but then you’ll need tubing to run from the tap to the bucket. The upside is that you’ll only need to check it once a day.

Don’t use copper for your spile – it’s toxic to plants.

When Should You Tap the Tree?

The sap is actually created in the roots of the tree and runs up it to nourish the limbs and new buds for spring. Having no sap in the winter is nature’s way of protecting the tree because sap is mostly water and would freeze.

The sap usually starts running anywhere from mid-February to early March and lasts 4-6 weeks, depending upon the weather. The temperatures need to rise above freezing during the day and drop below freezing at night.

The flavor of the sap changes during this period. In the beginning, it will yield a light-colored syrup with a mellow flavor. As the season progresses, the sap will produce syrup that’s darker and richer. Eventually, it turns unpalatable and that’s why you want to catch it early.

Does Tapping Hurt the Tree?

In case you’re worried about harming the tree, tapping, even if you use 3 taps, only takes a maximum of 7-10 percent of the total sap that the tree makes, so you’re not hurting it.

The tap itself does create a wound but doesn’t permanently hurt the tree as long as you remove the tap at the end of the season.It will heal and grow over. However, you shouldn’t tap the tree in the same spot the next year. Drill another hole that’s not vertical to the old one, and several inches away.

Some people only tap a tree every other year to give it a chance to recover but most don’t, and the trees will remain healthy for years. Since you may be learning to do this in case SHTF, you may need every tree that you have access to in order to make maple syrup at home to replace sugar in a survival situation.

How to Tap the Maple Tree

This process is actually pretty simple. Here it is:

Once buds develop on the tree, the sap will develop an unpleasant flavor, so your time is up!

On average, you’ll draw 3/4-3 gallons of sap per day, per tap. On average, each tap will yield 10-20 gallons per year, but if it’s a good year and your tree is a good producer, it’s possible to get as much as 40-80 gallons per tap per year!

Don’t be disappointed if you only get a couple of cups one day, though. If the weather doesn’t cooperate one night or one day, you can expect a brief lull in production. Extracting sap from a maple tree is never an exact science.

Troubleshooting: If the sap is running, the drill bit will be damp or there will actually be sap running from the hole. If you drill too early, the hole may begin to grow shut and flow will be restricted or even blocked and you may have to drill a new hole.

Now you know how to extract sap from your maple tree and collect it. You’re now ready to cook it down into maple syrup!

Have you extracted sap from a maple tree? If so, share your experience with us in the comments section below!