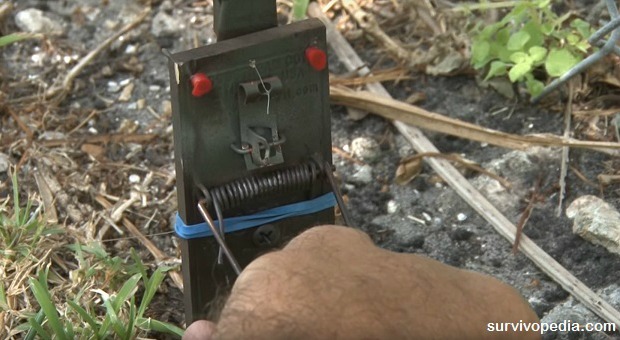 Tripwire alarms are among the simplest yet most effective ways for setting up a home security system.

If you don’t want to spend hundreds or even thousands of dollars on sophisticated pieces of equipment, today’s article is aimed at helping you to design and build a tripwire alarm for your home, dirt cheap and crazy simple – as in budget-friendly and easy to install.

As far as DIY jobs go, making your own home security system is among my top ten best ever. It’s fun, instructive and, most importantly, embraces the essence of prepping: “be prepared, son, be prepared.”

What Is a Trip Wire Alarm

Let’s begin with the basics: what’s a trip wire alarm? Well, as the name suggests, you just run a “wire” across a pathway you want to protect: in most instances, a door entrance, or a gate on your property, or whatever.

Then, if an intruder walks through and trips over the wire, an alarm is activated. Keep in mind that what I’ve described above is the most basic type of a tripwire alarm, as it refers to an actual wire and all that. Obviously, as we live in 2016, there’s always room for improvement.

Now, speaking of “traditional” tripwires, they’re incredibly simple, very intuitive and fairly easy to set up. But in our modern day and age, when wireless technologies and electronic components are dirt cheap and readily available at any Radio Shack or hardware store, we can go a step further and go a little bit more high-tech.

Regular tripwire alarms – the classic variety, so to speak – come with a built-in inconvenience, i.e. you’ll have to actually run a physical wire or line from the tripwire to the alarm itself.

If you want to protect a far-away location or a room or door inside of a building, you’re going to need a lot of wire, making it pretty difficult to set up.

However, you can get around this logistics nightmare fairly easy via high-tech (dirt cheap, don’t worry) gear, by using a small radio transmitter that will activate the alarm without requiring 5 miles of wire and what not.

But let’s not get ahead of ourselves. Let’s start with the basics, shall we?

The conventional tripwire alarm, the one I’ve told you about in the beginning, consists of a line stretched across a path. Once an intruder trips over the respective line, the alarm is triggered.

Wired tripwire alarms are the most commonly used setups when it comes to homeowners installing them themselves, because they’re cheap and easy to install basically anywhere.

And learning how to DIY a tripwire alarm is very easy and fun.

Find out more on how to improve your layered home defense to survive disaster!

The good news is that you can DIY at home basically any of these three using dirt cheap gear and basic tools.

Let’s begin with a classic in that field: the BANG tripwire alarm. The BANG particle refers to the actual alarm, which consists of ring caps.

So, for this low-tech and highly effective DIY project, you’ll require the following materials:

This type of tripwire alarm is the ideal solution for securing outdoors objectives, such as the perimeter of your home or a camp site. Needless to say, this project is very cheap, fairly easy to DIY and it works awesomely (the BANG part will scare most intruders away in a jiffy).

The basic idea behind this DIY project is that once the intruder trips over the wire, the mouse trap is activated and as it triggers, it detonates a ring cap, making a loud BANG. Pretty smart, huh?

However, there’s even a simpler design for a classic tripwire alarm. First, you must select a location to set up the actual tripwire. Again, this is mostly an outdoor project that can alert you to the approach of a wild animal or various intruders. You must choose wisely, i.e. a place where you’ll have to actually walk to get into.

As the intruder passes by, his feet will catch the trip wire and trip an alarm. Obviously, the tripwire must be inconspicuous at a casual glance, or else your alarm will fail miserably. You’ll have to attach the trip line to a fixed location, between two trees for example, or between two rocks, roots or whatever. The idea is that the assembly must be stable enough to pull on the alarm itself when somebody trips over your wire.

Now, as per the alarm, you can use anything, including your imagination. Here are some suggestions: a string of noisy tin cans or an actual siren or whatever, provided it’s loud enough to warn you about an incoming danger. For example, you can use a string of tin cans stretched in a network-fashion hung between trees or something similar.

However, in our day and age, tin cans are kind of obsolete, so instead, you can use a cheap electronic siren. Here’s an even cheaper version of this type of trip wire alarm, which uses a battery and a clothes pin for creating a short circuit upon triggering, i.e. no sound, but a flame. This one works best during the night, obviously, provided is someone watching.

Here’s a project about DIY-ing a remote tripwire alarm, which requires building a small radio transmitter to activate the alarm via radio-waves.

Last but not least, this is the uber-high tech laser tripwire alarm, a fairly easy DIY project for your home security that will require a couple of mirrors, a cheap laser-pointing device and 10 dollars’ worth of electronic parts available at any Radio Shack or on Amazon. Using the laser tripwire alarm, you’ll be able to secure your entire house via an array of light beams which, unlike in B rated movies, are totally invisible and impossible to avoid.

I know there are a myriad of designs and solutions with regard to tripwire alarms, but I’ve tried to select the easiest to build and to install. Try the project that suits you the best and start practicing your urban survival skills.