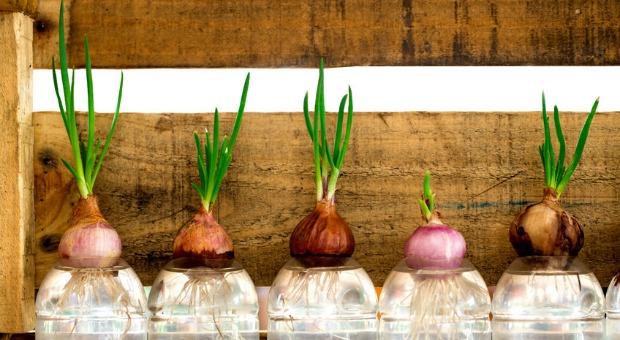 How To Feed Your Family Without Any Soil Or Space

Growing hydroponically sounds complicated and expensive, but it’s actually neither. All that it means is that you’re growing your plants without soil. I’ve seen examples of hydroponic systems made out of our favorite tool ever – a 5-gallon bucket.

I’ve also seen systems that are exactly what you imagine – tables and tables full of fancy equipment and mysterious-looking tools and chemicals.

Just like anything else, it’s just a matter of how complicated you really want to get.

Let me give you a quick rundown of what it’s all about though, and why you should consider it, then we’ll talk about why it’s a great partner for vertical gardening.

As we already determined, you don’t use soil. The entire system is based on the concept that the roots are freely flowing in the water. They’re not packed tightly in soil. Hydroponic plants grow 30-50 percent faster than their soil-grown sisters, are generally healthier, and produce more fruit.

This is likely because the extra oxygen in the water helps the plant absorb nutrients better, and the nutrients are readily available in the water/solution and the plant doesn’t have to work to extract it from soil. It uses the extra energy to grow and produce.

Hydroponic growing is also good to use inside because you don’t have the dirt mess and the plants don’t have to struggle so much to get the nutrients that they need, so it’s easier for them to grow in a semi-challenging environment. It’s a great way to grow food in small spaces.

Vertical gardening and hydroponics also pair well because the drip-down system is an effective method of watering, and if you’re using a hydroponics system to catch the runoff, you’re saving a ton of water.

In a situation where fresh water is limited, that’s a huge benefit. As a matter of fact, in a world where soil is becoming depleted and water isn’t as plentiful as it used to be, vertical hydroponic gardening is seen by many as the method of future mass food production. Of course, their plans for world garden domination is a bit more complex, but it’s based on this theory.

Stack it Up – The Foundation of Both Ideas

Also, and this takes us to our next point, hydroponics systems are commonly used in a stacked fashion so that the water is drawn up from  catch basin at the bottom and is released via drips onto the plants below. Then it drips from the top layer to the layer beneath, and so on until the water is back in the catch basin.

This makes hydroponics a great partner for vertical gardening. 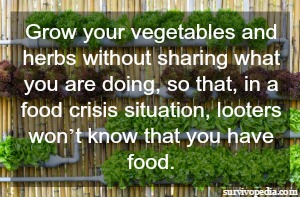 One problem that you often face with regular, dirt vertical gardening is that the wall is heavy and bulky, in large part because of the weight of the wet dirt.

With hydroponic vertical towers, you get rid of that.

There’s still some water weight, but unless you’re using gravel or sand to secure the roots, the weight is less.

This makes it more portable, too, especially if you use a well-contained system. Portability is good for a couple of reasons.

If you need to move your vertical gardening wall or tower so that the plants are getting more or less light, or so that looters won’t know that you have food, then you want to be able to quickly and easily move the wall.

Another huge benefit is that you know exactly what’s going into your plant. Though you can buy bags of soil to grow your plants in, there’s no way for you to know what’s in that dirt. The same goes for using plain old yard soil. There could be residual fertilizers, pesticides, or acid rain in it and you’ll never know.

When you use hydroponics, you know exactly what your plants are coming into contact with. Enough said about that.

Best of Both Worlds

Vertical gardening and hydroponics are like peas and carrots – different, but when you bring them together, they’re a delicious combination that just works!

Do you wonder what are the secrets that helped our grandparent survive during harsh times?