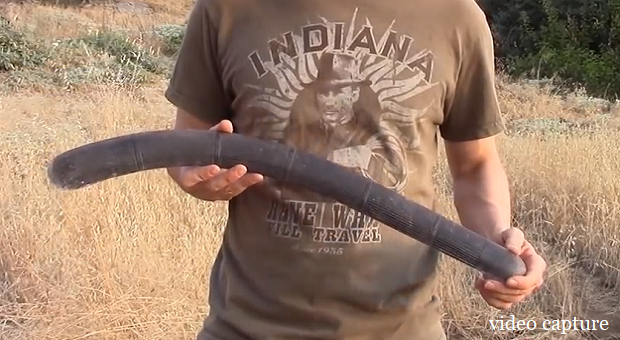 How To Build A Boomerang And Use It For Survival

When it comes to survival defense, which means self defense in a SHTF scenario, it would be best to have a firearm with you. That’s layer one of survival defense in my book. Guns are preppers’ best friends and they’ll never let you down.

However, sometimes one must improvise, and here alternative survival weapons come into play. When the unexpected happens, you’ll have to rely on more primitive methods to save your life, or to hunt or whatever.

Enter the boomerang, also known as the rabbit stick or the bunny stick. Would you know how to use it? Let’s see!

A Story of Many Continents

The boomerang is the Australian version of the Native American (let’s call it Indian for all intents and purposes) rabbit stick.

The thing is, almost all primitive cultures which relied upon hunting for survival invented something similar to the boomerang, i.e. a throwing stick used as an effective hunting tool via gradual improvements over time.

Both the Australian boomerang and the Indian rabbit-stick are basically the same type of weapon.

And to tell you a little known factoid, the real deal Aussie hunting boomerang does not fly in a circle when thrown. I mean, a proper boomerang does not return to its owner upon release, and there’s a simple explanation for this: a stick (as in a weapon) that flies in a circular trajectory when thrown would be almost impossible to hunt with, think about it.

The ballistics of such a gizmo would be almost impossible to master by a normal man, which doesn’t spend 10 hours a day practicing throwing a returning boomerang since he was a 5 year old bushman wannabe.

Don’t throw rocks at me, I am aware of the fact that returning boomerangs are all the rage for Indiana Jones aficionados and the like, and they do exist.

A returning boomerang can only be used in large-open spaces, like hunting in the desert (hunting what exactly in the desert?) or in meadows, basically in places where there’s no vegetation nor tall objects that may disrupt the boomerang’s flight path.

However, even on the ideal hunting ground, it’s incredibly hard to aim precisely at distance using a returning boomerang; I mean you’d have to be at least some upgraded version of Crocodile Dundee to do it. Maybe you are, I’m just saying.

Now, even if boomerangs were used by the indigenous people in Australia for millennia, similar primitive hunting tools were also discovered in Stone Age Europe. The most used version of the boomerang is the non-returning variety, which is basically a throwing stick,  yet more slimmer and aerodynamic.

The non returning boomerang slices through the air at amazing speeds due to its peculiar design: this bad boy has one arm longer than the other and is very aerodynamic.

You can use a non returning boomerang even for hunting large game, provided it hits the animal’s head or breaks its knee/leg or whatever. These boomerangs are great for killing/maiming a target, whether for hunting or self defense.

Can You DIY a Boomerang?

When it comes to the DIY thing, to begin with, you’ll have to do a little scouting for that perfect piece of wood. Ideally, you’ll have to get your hands on a tree limb which is about 3 inches in diameter and also boasts a natural curve in it.

Hardwood is best for this kind of job and also look out for knots, they’re a no go. Your future boomerang should be as knot free as humanly possible (goes to balance).

After you have located the perfect limb for your DIY project, cut a 3 foot section of it, with the curved centered as closely as humanly possible. You’ll probably not use the whole 3 feet, but it’s nice to have a little extra wood to play with. In a perfect world, you’ll allow the limb to season in a dry, warm place for a few weeks.

Now, you’ll have to carve up your boomerang from the piece of wood and for the initial roughing up, an axe would be great. You’ll have to thin down the top and the bottom of the limb, looking for a thickness of about 1 inch.

Make sure the blade of the boomerang goes the full width of the limb. When the job is done, you should have something like a 1 inch thick by 3 inch wide board, featuring a curve in the middle.

Here comes the detailing work, i.e. take your survival knife and start adding the final touches to your boomerang.  One end of the boomerang/rabbit stick must be narrowed down/rounded off to make for the handle, whilst the blade should be 1 inch thick in the middle through its entire length, and tapered down making a rounded edge on both sides. If you leave the edges too thin, they’ll get dented/damaged when you hit rocks or trees with your boomerang.

And here’s a tutorial about making a rabbit stick for survival hunting.

Mind you, if you want to hunt using such a device, be prepared for long hours of practice. But in the end, this is what you’re actually doing with every skill you need for survival, don’t you?

Practice, practice and practice till you’re sure that you’re good enough to save you and your family, then you start practicing again.

I hope the article helped. If you have any ideas or comments, please feel free to comment in the dedicated section below.