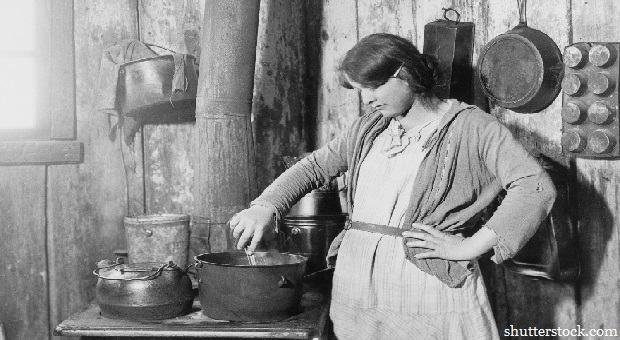 As we walk through the air conditioned aisles of today’s grocery stores filled  with countless varieties of every type of food imaginable, it’s hard to believe  that we live in the same country that – for ten years, between 1929 and 1939 – suffered through the worst economic downturn the industrialized world had  ever seen.

But, while life was much harder for survivors of the Great Depression than it is today, any Depression survivor will tell you that (thanks  to their innovativeness and ingenuity) they seldom went hungry for any great  length of time.

There are a myriad of lessons to draw from survivors of this dark period in  American History and practical ways for today’s survivalists to incorporate  principles from that time period into everyday living today.

In the 1930’s, farms were diversified to include a large variety of field crops,  garden vegetables and orchard fruit. Small farms also usually included hogs,  cattle, chicken and eggs as well as horses and mules for working and often  sheep for their wool and their meat.

Many farmers also kept bees in order to  harvest the honey. Women baked bread from scratch.

Self-sufficiency meant the difference between life and death, it was both as  crucial and as natural as breathing.

This innate sense of self-sufficiency during the Depression spilled over from  individual homes into regular social lives. Social circles and churches  organized potlucks and “one-dish suppers” as ways to include fun, food  sharing and learning.

Radio shows and women’s magazines featured home  economists who taught women how to make their food budget stretch with  cheap ingredient casseroles and simple toast, waffles and creamed chipped  beef recipes. Macaroni and cheese, creamed chicken and biscuits, chili and  soups quickly became some of the most popular meals for the time.

Men and women went out rabbit hunting to provide more meat for the dinner  table. It wasn’t uncommon to find dead rabbits hanging outside, dressed all the  way through so that when it came time to eat one, you would simply cut the string from the rabbit and bring it inside to cook.

All across our great nation, hungry people from all walks of life (especially city  dwellers) stood in “soup lines” for one free meal. Life on the farm was spent  growing, harvesting, preparing, and then preserving food – activities that filled up most hours of every day.

Without electricity, there was nothing to  power refrigerators, so keeping milk and other food fresh was difficult,  especially in summer months.

In the days of the Great depression, folks had to learn quickly how to stretch  every dollar they had and how to pinch every penny to get as much food as  possible during those difficult economic times. The recipes and strategies they  came up with may seem strange to us today, but they were featured regularly at  dinnertime during the Depression Era.

Here are a few examples:

Because hot dogs and potatoes were both affordable ingredients during the  Great Depression, many meals included one or both of these ingredients. The  process of preparing the Poor Man’s Meal included peeling and cubing a potato, frying it in a pan with fat, oil, or butter and chopped onions until browned and softened; then adding slices of hot dogs, cooking a few minutes more, and serving.

A simple and cheap dish originally created in Eastern Pennsylvania Dutch  Country, the Mid-Atlantic, and New Jersey, Creamed Chipped Beef was made  with dried and salted beef. Start by melting 2 tablespoons of butter over  medium heat in a pot and adding 2 tablespoons of flour for a roux.

Then, slowly  whisk in 1 ½ cups of milk until the mixture begins to thicken and boil. To that,  add about 8 ounces of dried beef (i.e. Hormel). Serve the finished product over  toast.     Fun Fact: Creamed Chipped Beef was affectionately also known as “S.O.S. (or  Sh*t on a Shingle, or Save our Stomachs).

This meal was a staple of our U.S.  troops during both World War I and World War II.

Hoovervilles were shantytowns that swiftly sprang up during the Great  Depression and were named for our 31st president, who had the dim  misfortune of being elected just before the Crash. These towns weren’t the only  thing that lent their name to the sitting Commander in Chief, however.

The  name was also given to soup kitchen soups or similarly thin broth soup.  Hoover stew had many individual variations, but one common recipe began  with cooking a 16oz box of pasta noodles (i.e. spaghetti or macaroni). While the  noodles were on the stove, hot dogs were sliced into round shapes.

The pasta  was drained when it’s nearly done (al dente) and returned to the pot. The hot  dogs were then added, along with two cans of whole stewed tomatoes, and one  can of corn or peas (undrained). This mixture was then brought to a boil and  left to simmer until the pasta was done cooking.

Corn and peas were not  required to make the dish correctly, any inexpensive, canned vegetable worked  as a sufficient substitute.

Basically a simplified version of a Chinese restaurant favorite, eggs served as a  fantastic source of protein, especially in a time when budgets didn’t allow for  meat. The easiest way to prepare this soup is to peel and dice both a potato and  an onion.

Slowly brown these in a pot with your choice of oil until they are soft.  Add bay leaves, salt, and pepper. Once these ingredients are browned, pour in  another half pot of water to the mixture to create a broth. Simmer these  ingredients on the stove, adding salt and pepper to taste as the potatoes are cooked thoroughly.

While the mixture boils, crack two eggs into the boiling  liquid and stir until the eggs are scrambled. Then, add two additional eggs so  their yolk hardens. Add cheese to finish it off. Serve alone, or over toast.

Gelatin was considered a cutting edge, modern food in the 1930s. This salad  recipe was made using canned corned beef, canned peas, lemon juice, vinegar,  cabbage and plain gelatin. The recipe was quite popular and remarkably inexpensive to make.

Described by today’s food critics as “wrong in every  possible way” when compared with today’s tastes and palates, this meal was  actually very popular in it’s time, and affordable to make.

Made using canned fruit cocktail (or any other canned fruit), honey, egg yolks,  and whipping cream, this dish was served during the holidays as a special treat  in a time when ingredients for other desserts were simply hard to come by.

First Lady Eleanor Roosevelt developed and promoted Home Economics  classes in schools and colleges during the Depression and recommended this  dish as a staple. The recipe called for spaghetti noodles boiled until they’re very soft (about 25 minutes) then mixed with boiled carrots.

Make the white  sauce using flour, milk, salt, butter, and a little pepper. Pour mixture into a  tray or dish and bake to make a casserole.

Although his taste was for much more upscale meals, President Franklin  Delano Roosevelt ate modestly in “an act of culinary solidarity with the people  who were suffering,” says Jane Ziegelman, to ​The New York Times.​ ​ His humble  7 ½ cent lunch included mashed potatoes, coffee, deviled eggs in tomato  sauce, and for dessert, prune pudding.

While these recipes may not appeal to today’s tastes and palates, these were  actual examples of recipes that got the vast majority of Americans through one  of the darkest periods in American History.

Today, were we to be faced with a  severe economic collapse, extended grid-down crisis, or other disaster, feeding our families (in principle) will be very similar to how it was done  during the Great Depression.

Many great food conservation lessons existed then that exist now. They  include knowledge of:

● How to grow, harvest and prepare your own food from your own land

● Sharing with and bartering with your neighbors

● Making the most of what you have on hand

● Thrifty living – reusing and recycling everything you possibly can

Preppers know that disasters like these occur at any moment and without  warning. Being fully prepared ahead of time is the absolute only way to survive comfortably until the disaster has passed. It may very well be a reality that everyone will have to revert to some of the methods our ancestors used to feed  their families.

To stay ready, buy and properly store large quantities of rice, flour, beans,  cornmeal, sugar, sea salt, and potatoes. Grow, dry, and store your own herbs  for seasoning and for use in essential healing oils. In times of severe economic  collapse, eggs, raw milk, butter, cream, bacon, pork and beef will all be at a  premium or only available through bartering, if available at all.

Raising your  own dairy cows, chickens, pigs or beef cows will keep you miles ahead of the  game, otherwise you’ll need to own something valuable and be ready to trade it  in order to get what you want from someone who has it.