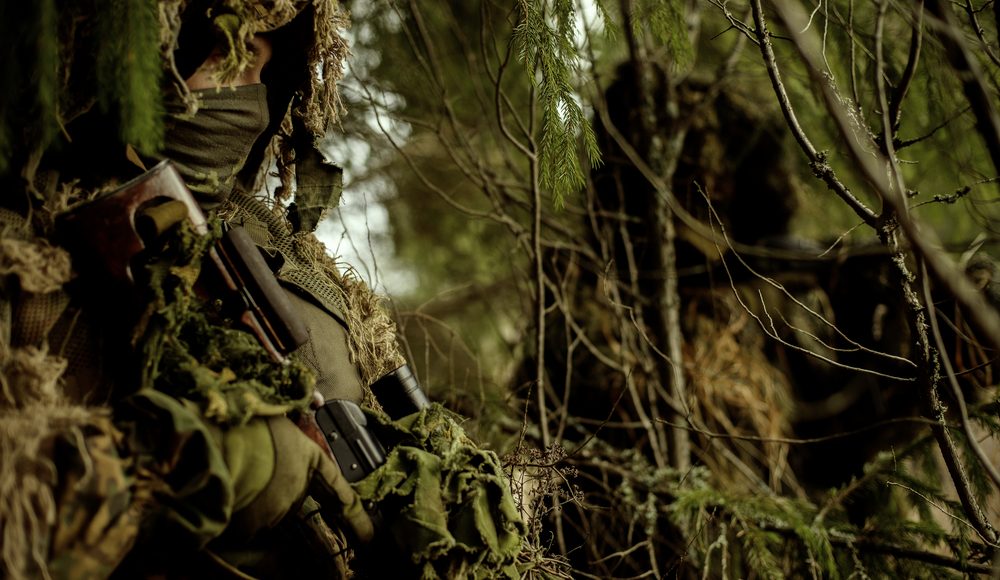 A lot of preppers are talking about bugging out since that action may be their only salvation in case SHTF.

While it may be obvious that keeping a certain distance between you and a certain threat will increase your chances of survival, things are not always as easy as they may seem.

In fact, there are chances ae that your bug out plan will not unfold as it should, and there’s always that unknown factor lurking in the shadows. Things get complicated even more if you have to get out of densely populated areas, where your fellow humans are the number one threat.

Moving undetected and keeping a low profile takes years of experience and practice in the field. Even so, in certain situations, you may be forced to disguise yourself or blend with the environment in order to save your life.

Today we will cover the camouflage aspect that might be needed for certain bug out scenarios. In order for your camouflage tactics to work, you first have to understand how it all works. Before you start buying all sorts of clothes or gear and watch various videos on how to hide your presence, I advise you to start with the basics of camouflage.

There are certain characteristics or factors that can be applied in disguising or hiding a person or an object. These are shape, shadow, shine, silhouette, surface, sound, smell, and movement.

The shape is one of the fundamentals for identifying an object or a living creature in the wild or in an urban environment. Let’s say you see a person in the city at a considerable distance. While you cannot recognize him or her as a specific individual, you may tell by the specific shape that you are dealing with a human.

All the objects that surround us every day have a distinctive shape even though you don’t pay attention to them. However, your brain is used with these shapes, and in case you need to identify a certain object, it will do a pretty decent job of telling you what the object you are looking at might be. I said it might be because our brain can also make mistakes and confuse shapes or assign them other characteristics during stressful situations.

Regardless of the nature of the object you identified, you should acknowledge that said object can provide a good cover when bugging out. It will help you conceal your presence as long as you aren’t altering the normal shape of those objects with parts of your body.

In most cases, it takes a keen eye to notice certain “unnatural” shape differences in everyday objects. If you make a mistake at concealing your presence using a certain object, chances are most people will go by without noticing the irregularities.

To learn about shadows, you should learn about their classification, which can be broken into two main categories: cast and deep.

A deep shadow is harder to be detected, and they can mainly be spotted from the air. However, the cast shadow is a dead giveaway, especially in an urban environment.

Deep shadows are the darker areas created where a solid object blocks the passage of light. Let’s say you build up a shelter in an area of heavy bush. While at first, it may not cast a shadow, when viewed from a distance, it may result in a darker area in the bushes or deeper shadows.

The one thing I recommend paying attention to is cast shadows. These are the most familiar, and they often occur without you even acknowledging it. If an enemy is hiding behind a tree, you will be able to spot the danger easily when his or her shadow is cast by the sun off to the side of the tree.

The same principle applies to all bugging out scenarios, and you need to pay attention to the light sources from your environment and their casting direction. There are so many light sources in an urban environment that keeping your position hidden becomes a real ordeal.

This is one of the camouflage basics that many people ignore. Most of them have no idea how easy it can be created, even by accident. Shine is the reflection of light of any object, and in an emergency situation, it is often used as a signal for help.

However, when bugging out undetected, you should do everything you can to avoid shine and get rid of any object that has reflective properties. The lenses of binoculars, rifle scopes, and bright pieces of metal (such as water canteen or knife blade) are just a few items that can cause shine. In some cases, even your clothes can cause shine, and you need to avoid light or bright colors to avoid being spotted.

This is another aspect you need to pay attention to as it can easily threaten your camouflage efforts. A silhouette is any dark shape or outline seen against a light background. For example, a person standing on top of a car will silhouette himself against the sky, and it can be easily spotted. It will become an easy target even during night time.

The same effect can occur against backgrounds that have reflective properties such as bodies of water or snowfields. To avoid silhouetting yourself when traveling in open areas, you need to keep your body as close to the ground as possible.

The surface of your environment or the objects you are carrying are important factors when it comes to camouflage. The size and texture of an object play a critical role when trying to hide a said object or blend it with the environment.

Common sense and logic tell us that the surface of an object makes its detection easier or harder, and you cannot physically alter the size of the object. However, you can always reduce the exposed surface of that object to make it easier to blend with the surrounding environment.

As a quick example, when you set camp, do so under the canopy of the tress and make as little light as possible to avoid being detected. Even if you have no objects above your head level, you can improvise a cover by using a tarp. Even more, you can cover the tarp with leaves or grass from your specific environment.

The same rules apply when traveling, and you need to avoid standing out when all other things are equal. If you are traveling through an open field, try squatting to make yourself less visible. It can literally save your life!

This is another factor that may seem like commons sense, and yet, it is so hard to prepare for it. Even a soft or dull sound can be carried away, and it will help a good tracker identify your position, long before he can possibly see you.

The main rule to keep in mind is that sharper and louder sounds are easier to be detected than softer sounds. Here are just a few examples of sounds that can give away your position:

When bugging out during a “keeping a low profile” scenario, you should make as little sound as possible and remain quiet when others are nearby.

Since this is almost impossible for some, I recommend traveling during certain hours of the night/day in order to avoid detection. Each environment has certain timeframes when activity is high or low, and there is also the timeframe when REM sleeps sets in. Use these to your advantage.

If you are a hunter or trapper, you’ve learned by now that smell plays an important role in keeping a low profile. A distinct smell of your hunting or trapping gear can alert prey, and you will go home empty-handed.

In our society, the smell is somehow underrated, and we are used to all sorts of smells without paying too much attention to them. However, in the wilderness, the smell can become your enemy, and the smell from your campfire will still be detected even when smoke is not present. The same goes for the foods you are cooking and that particular smell can be carried away over long distances.

There are various ways to conceal your odor, and it all depends on your environment. However, when dogs are being used to search for you, there’s little you can do to conceal your smell.

Movement attracts attention naturally, and it’s a defensive mechanism embedded in our brain that used to keep us alive when predators were stalking us. We were used to noticing movement rather easily, and it was a warning signal that something is going on in a certain direction and it may become a risk or good opportunity for us.

For example, if two people are standing at the edge of the forested area and you are passing by without paying particular attention to them, the one that begins to move will be the first to be noticed. The one standing still will be noticed later on, or it can go totally unnoticed, depending on the movement being displayed by the first one.

Lack of movement will cause people and animals to look past you. However, if you are forced to move, it is recommended to do slow and smooth movements. Erratic movements will attract attention much faster than deliberate and slow movements.

While camouflaging your presence when bugging out may seem like something extreme for certain preppers, you never know when you might have to conceal your presence to get out of dodge. Now that you learned what the principles of camouflage are and how they work against you, you should consider how to employ them when assembling your gear and planning out your bug out plan.