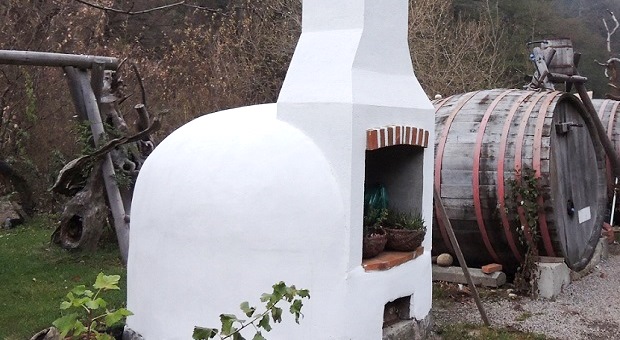 I remember that when I was a kid, I used to play cops and robbers, cowboys and Indians and stuff like that, but the girls were busy baking mud pies like crazy.

You know what I’m talking about, right? Mud pies and earth ovens, these are the memories of my childhood; well, among many others I can’t write about here, because we have a family audience.

Mud pies are just a childhood memory, but wood-fired ovens are maybe the best things invented by humans, since…I don’t know, the biped posture? I mean, the best pizza in the world is made in wood-fired ovens, and so are many other foods.

Cooking in wood-fired ovens definitely improves the flavor of almost any type of food, not to mention that, if properly insulated, an earth oven will maintain its internal heat for days, making it quite efficient at cooking lots of food with minimal fuel spent.

So, today’s article is about how to build your own wood-fired, or earth oven, a skill which has the potential to save your life in a survival situation. And since we’re talking about SHTF scenarios, we will focus on oven designs that are dirt-cheap and easy to build using simple and readily available materials and tools.

Let’s begin today’s journey with the DIY barrel stove, also known as a wood-heater oven, which is any hobo’s dream.

In case you did not know because of today’s political correctness, the hobo stove is actually a specific design, representing a model of an improvised cooking/heat producing device, which is often used in various survival scenarios. After all, who knows more about how to survive a crisis than homeless people?

Why a barrel stove/hobo stove, you may ask? To put it bluntly, because the design is pure genius, due to its simplicity and efficiency. You can use a barrel stove for various purposes, ranging from outdoor cooking to boiling water for purification during power outages or what not. This type of stove can be improvised using readily available materials, such as basically any type of tin can or barrel, regardless of the size.

In the following video tutorial, the “hero” uses a recycled steel barrel for building a hobo stove, but you can also use a trash can, an old oil drum (make sure it’s clean or else you’ll have a bigger fire than you bargained for!), a gas canister or something similar; even a large can of ravioli/veggies will allow you to build a small stove and cook your diner.

The advantages of the barrel stove/hobo stove are that it’s very easy to manufacture and it’s incredibly light, versatile and efficient. You can also transport it easily if required, and you don’t need high tech tools, nor skills, for manufacturing it.

Another advantage is the price tag, because there are many places where you can acquire an old oil drum basically free of charge; for example just pay a visit to your local garage and ask your mechanic. Demolition yards and scrap yards are also viable options.

The DIY job is very straight-forward and it consists of removing the top of the barrel first, and then punching a dozen or so small holes near the upper edge. You’ll also have to cut a larger opening on the side of the barrel near the bottom for air and fuel, and that’s basically it.

The wood is placed inside the barrel and ignited, while the bottom and the side orifices draw air inside through convection, keeping the fire alive as heat gets out through the top. You can use anything for combustion; not only wood, but even animal dung or wax. If it burns and isn’t toxic, you can use it.

Moving on with the article, let’s see about the ground/earth oven, your best friend when it comes to outdoor cooking, survival or just plain fun. You will find below a clip featuring a dude (pun intended) who builds his own ground oven while out in the woods, doing who knows what. He looks like he’s up to no good; however, don’t judge the guy from his looks, because he does an excellent job in the end with that roast (just kidding, here.)

Earth ovens, also known as cooking pits or ground ovens, are the simplest and oldest methods of cooking, and they’ve been around for thousands of years. They’ve been used all over the world, by almost all cultures and peoples. Earth ovens are an excellent choice in a survival scenario, being the best tool for cooking your food when you’re out there in the wild with next to zero equipment available.

This primitive yet highly efficient cooking method consists of digging a hole/pit in the ground, which is then cobbled with rocks. You’ll have to go find fairly flat rocks for lining both the pit’s sides and the bottom; that’s the hardest part of the job. Stay away from stream bed stones, as they tend to explode when exposed to heat due to the water which is trapped inside.

Just enjoy the video for getting the fine details (you’ll have to build a fire presumably) and remember, practice makes perfect folks!

Here’s a video tutorial which depicts the DIYing of the ultimate clay cob oven. Be aware that this is a complex job that requires medium to high skill levels and some elbow grease in the process.

But the end result is absolutely outstanding, as you can see from the YouTube video. Owning a backyard clay cob oven is a delight, especially when it comes to making your own wood fired pizza, garlic bread or jacket potatoes. Remember, nothing tastes better than food cooked in a wood fire, thanks to its wonderful smoky flavor.

For building a cheaper/more basic cob oven, you can use recycled materials and cheap local resources (let your kids for help you with making the cob, which is a simple mixture of sand, clay, water and straw).

The materials for DIYing a clay cob oven are pretty basic: clay, sand, straw, gravel, rocks, tarp and water, together with a little bit of hard work and skill, but I bet in the end you’ll find that it was worth the stretch!

The earthen oven, another great and relatively straight-forward DIY job for making your own food using wood fire and dirt-cheap materials. Earthen ovens are thoroughly documented way back to the ancient Romans and they were widely used in the US until the 18th century.

You can find them even today in various places, due to their excellent characteristics, the ease of use and the simplistic build. The design is relatively rudimentary; hence building your own earthen oven is by no means complicated, meaning that you don’t need previous building experience.

Needless to say, this project is a great confidence booster upon completion! You’ll require dry clay, sand, straw/dry grass, fire bricks, canvas tarp and plenty of water. The work itself is a child’s play, literally, as it resembles playing with sand, like on the beach when you were a kid.

You just follow the instructions in the video tutorial and later on, you’ll enjoy baking your own bread and pies using your own earthen oven!

Our last project is another version of the earthen oven, made even simpler than the previous design. It’s a project that it can be finished in just under 24 hours.

Based on an 18th century design, this earthen oven will require minimal quantities of dirt-cheap materials and the least amount of time, going from bare ground to a baked pie in under 24 hours. Basically, the previous idea has been taken to its simplest and most primitive form.

As for materials required, it doesn’t get any simpler and cheaper than this: 2 bags of cat litter, play sand (from the hardware store, about 4 bags), water, straw/dried grass, sticks, bending sticks, a shovel, scrap fabric (not synthetic), a mixing tarp, firewood and a sacrificial board (a plank of wood basically).

That about sums it up for today. Think about your DIY oven project, and if you have questions or comments, don’t hesitate to use the dedicated section below. Good luck, have fun folks!