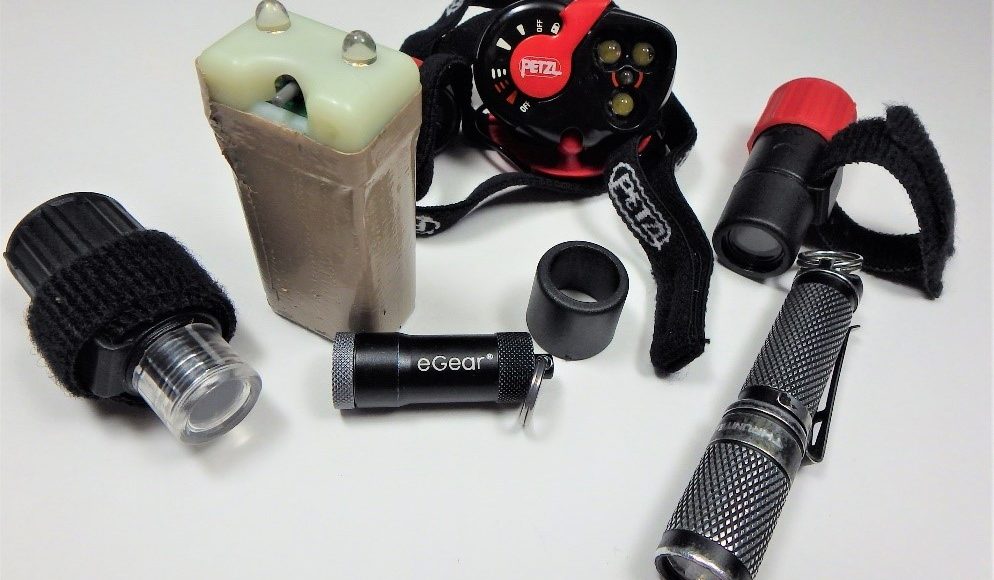 On my first wilderness survival outing, I learned the importance of illumination.

I was a young Boy Scout looking to earn the wilderness survival merit badge. My stepdad was an archaeologist, so I had logged a lot of time hunting and camping and had good teachers. Unfortunately, I had also read a book or two by a popular survival instructor back East that had romanticized my view of wilderness survival.

The requirements stipulated that I was allowed little equipment on the trip and no backup gear. Right out of the gate, Murphy made his customary appearance, and our vehicle broke down, causing us to arrive late, just as the sun was dropped behind the mountains. Between the forest and cloudy night, I couldn’t see to gather firewood, start a fire, or build a proper shelter. Without a light source, the best I could manage was to scrape up a big pile of pine needles with the sides of my boot soles and burrow into the center. It soon became very cold. The cold robbed me of dexterity, and I was unable to strike matches or work a lighter. If it had been any colder, I would have been in real trouble. Thankfully, I survived that cold, miserable night to learn some valuable lessons and today I always carry a light source.

How important is it to carry a light source? If you are trapped in a building without light, a cave, or even just a dark night, you may be operating blindly without one. On 9-11, the fact that one survivor who carried a small flashlight was credited with saving around thirty other victims who could not see to escape. Thanks to that light, the survivors were able to hold hands, forming a human chain, and pick their way through to safety.

Every piece of equipment that goes into a pocket survival kit or that is carried on an everyday basis deserves serious consideration. Such a light source should have certain characteristics if it to be included:

Each of the LEDs listed below has strengths and weaknesses. By assessing them in light of your specific needs, you’ll be able to choose an option that makes sense for your own pocket survival kit.

This light is unique for extremely long run time. With a lithium battery, it has a burn time of over 1,200 hours on low and over 80 hours on high. This has earned it a place in the larger incarnations of my own pocket survival kit. The light tail-stands well and the light is diffused broadly, which is great for lighting a shelter and working but not so great is you abiding by light discipline and trying not to be seen. This is easily remedied, however, by encircling the business end of the light with 100MPH tape. I have the optional headband, but it’s on the bulky side to include in a pocket survival kit and positions the light alongside the head instead of in front so I improvised a more compact solution that positions the light correctly. I suppose it could also be clipped to the bill of a hat by improvising a clip. PakLite comes in different temperatures of white, in red, with one white LED and one red and there is an infrared version. It comes in a variety of colors including a glow-in-the-dark version and costs $20-$25 depending on the model.

In my estimation, the chief limitation of this LED is that it isn’t water-resistant. It also needs to be taped to the battery to ensure that the light doesn’t’ get knocked off the battery at the worst possible moment, but that hasn’t been a major inconvenience considering how rarely the battery must be changed. In fact, it’s a handy way to pack a little extra 100MPH tape your kit. The low/off/high switch can easily be bumped on and off, so it needs to be stored with the battery removed and the contacts covered.

The MK10 is on the large end for this type of LED, but it is water-resistant to 150 feet and near-indestructible. This model of finger light was designed for pilots but is now widely used in applications where hands-free light is needed. It comes in many colors and even in UV and IR versions. The light is directional but can be diffused over a wider area by removing the ring that makes it directional.

The MK10 is issued in some military survival kits. In addition to strapping it to an index finger, it can also be secured in place with the hook and loop fastener or hung around the neck or in a shelter by a lanyard hole. It is powered by three 357/303 L44 button cell batteries. Cejay Engineering doesn’t publish a burn time for the MK10, so you’ll have to experiment a little to figure it out, but I own several of these LEDs in red, and IR and batteries seem to last a long time. The finger light also doesn’t tail stand unless you cut the lanyard hole off.

The Petzl e+Lite is a very small purpose-designed emergency headlamp. It is very compact and runs on two CR-2032 lithium coin cells which give it a burn time of nine hours at 50 lumens, twelve hours at fifteen lumens. This headlamp also has a two-lumen red LED and strobe settings for both white and red LEDs. The e+Lite is well designed, and the on/off switch features a lock position, so it is unlikely that it will get turned on inside a kit.

Newer models of the e+Lite feature a whistle on the headband’s cord lock. I own two of the older 25 lumens models and they are compact and lightweight. At $30, the e+Lite is on the expensive side for an LED produce on this scale. The mount also features a ball swivel so the LED can be set down and aimed as opposed to worn.

I carry one of these on my keychain. A twist of the bezel controls three settings ranging from 0.04 to 120 lumens. It is just $13.95 via Amazon Prime which is an outstanding value for light machined from aluminum and IPX8 water resistance means that this light is water-resistant against submersion at a depth specified by the manufacturer (2 meters).  It features a two-way reverse pocket clip so it can be clipped to the bill of a hat and used as a headlamp. A single AAA battery gives this LED burn times ranging from 115 hours at 0.04 lumens to half an hour at 120 lumens. It also features a strobe feature. This light can tail stand even though it has a lanyard hole and has worked well for keychain carry.

The only problem I have encountered is that the bezel came loose and fell off once but fortunately, I was able to find it. Also, the burn time for this light at 12 lumens is only 6.3 hours and 0.04 lumens isn’t usable unless you have time to let your eyes fully adjust to the dark, so if this is the only light in your kit, you should definitely carry a spare battery or two.

Formerly made by eGear and not mad by Ultimate Survival Technologies, the Pico is the smallest LED in this lineup. The older model produced 10 lumens and the newer model uses four small button cells in an adapter to produce 20 lumens for 15 hours. I own the older model, which I wear daily on a necklace, so I always have a light with me. It is unregulated, so it produces less and less light as the battery voltage drops. It has an aluminum body and is gasketed with IPX4 water resistance which means is protected from water splashing from any direction.

Changing the batteries would be tough if you were in the early stages of hypothermia since they are tiny, and the light uses a small plastic insert to pack three tiny batteries together to make one small battery. If you use this light, it is better to buy extra inserts and pre-load them with batteries. I Was able to find extra inserts, but I do not know if they are still available. This like doesn’t tail stand and I don’t think is long enough to clip securely to the bill of a hat even if you rig a pocket clip. However, it is light enough to hold in your mouth or lips or it could be secured to a finger like a finger light for hands-free use.