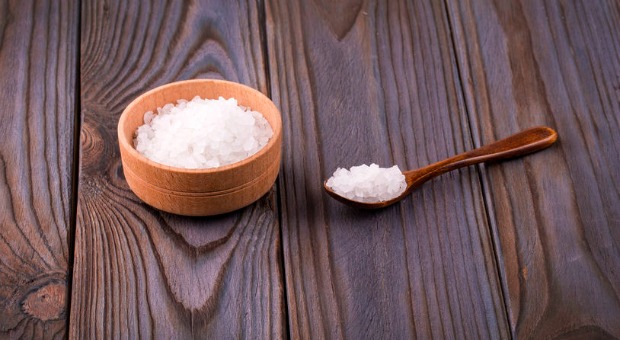 I think that as preppers and homesteaders, we can all agree that three of the top things we look for in an item that we consider worthy of stockpiling is cost, versatility and utilitarianism. In other words, how many different things can we use it for, and how often will  we reach for it?

Well, using those criteria, Epsom salt goes somewhere near the top of the preparedness list, along with vinegar and duct tape. But why?

Epsom salt, sea salt, table salt, kosher salt … they’re all the same, right? Just different textures? Nope. Actually, it’s not a salt at all. Sea salt, kosher salt and table salt are at least 97.5% sodium chloride. Of course, kosher salt is, well, kosher, and sea salt also has minerals, but Epsom salt is a completely different beast – it’s actually magnesium sulfate. And it has a ton of survival and household uses.

Another big difference between Epsom salt and other salts is that it doesn’t really have culinary value – it’s bitter. It’s used more as  a chemical than a seasoning. So, don’t pull out your box of Epsom salts when you run out of kosher salt – you won’t be happy with the results!

Draw out Toxins and Impurities

This was actually the first use of Epsom salt. In the early seventeenth  century, people that would bathe or soak in the waters produced by springs in the town of Epsom, England because of the curative effects that it purportedly had. The wealthy began to travel there just to soak. A doctor began extracting the salt and the rest is history.

Though studies are contentious about the actual curative effects of soaking, there’s no denying the fact that it’s been used for that purpose to alleviate muscle soreness and fatigue, arthritis, and skin conditions ever since. It’s likely due to the magnesium.

Epsom salt dissolves well in warm water but not so well in oils or lotions, so there’s no need to complicate things. Just dissolve a cup and a half or so in a half-gallon of hot water and add it to your bath water. If you’d rather just soak a particular body part – say, your feet – just add a cup to very warm water and soak away.

Because it does have magnesium and sulfate in it, you shouldn’t soak in the tub for more than 15 minutes a day, or in a small container for more than 30 minutes. Follow the directions on the container.

Discover the health and healing secrets that helped our forefathers survive harsh times!

Whether you want greener, thicker grass, tastier tomatoes and peppers, or prettier flowers, Epsom salt is a good option because magnesium helps plants produce chlorophyll and allows your plants soak in nutrients such as nitrogen and phosphorus, and some plants need more of that that others. Many soils lack enough magnesium to do this. If you just want to green things up so that your yard looks great to both your neighbors and your livestock, add 2 tbsp./1 gallon of water and spray on your lawn with a garden sprayer.

To give a monthly magnesium boost to your plants, mix 1-2 tsp/gallon of water and saturate the soil around the plants so that it goes to the roots. If you’re using a mister, use 1-2 tablespoons per gallon. This recipe also works well when you’re germinating because seeds need both magnesium and sulfur. Just water your seeds with it as soon as you plant them.

To add magnesium to your soil when you plant, sprinkle 1 tbsp. around each transplant.

The first step to tanning a raw hide is to remove the flesh from it. Some remove the hair as well, but some would rather leave it on. With magnesium tanning, the Epsom salt is added after the flesh is removed and is used in as a “swelling agent” to soften the hide, increase durability, and decrease shrinkage. It may affect the color of the hide or leave stains on it.

Be careful using Epsom salts because magnesium can, in combination with the right chemicals, become explosive.

Raccoons love your garden, your garbage, and your hen house, but you’re probably no so in love with them. Good news – they hate the smell of Epsom salts. Sprinkle it around those areas and your coon problem will go away. Remember to reapply after it rains.

Of course, that won’t keep them from dropping down off a fence or finding another way in, so it’s best to use Epsom salt in conjunction with other practices such as keeping your garbage is tight-sealing containers.

To deter slugs from your garden or your planters, just sprinkle it around the perimeter. Remember that it will dissolve, so you’ll need to reapply after rain.

I’ve used Epsom salt for splinters, bug bites and skin irritations many times! The problem with any of these conditions is that if they get infected, and they quickly can, then you can be in big trouble in a survival situation.

One such situation that could lead to this is a splinter that you leave in. Soak in Epsom salts as I described above and it’ll help draw it out.

If you have bug bites or poison ivy, you can make a paste with Epsom salt and apply it to the area and it will help draw out the itch and discomfort. Some sources say to bathe in Epsom salts for poison ivy, sumac, or oak, but that seems counter-intuitive, because hot water makes you itch more, and it’s possible that the bath may spread the rash.

There are opinions on both side of the fence on that, but when it comes to the possibility of spreading the misery, especially to tender spots, I’d rather not take a chance. Of course, that’s up to you.

To find natural anesthetics that may also help in these situations, check here.

You need to be careful taking Epsom salt internally because of the magnesium and sulfur content. That being said, it’s long been used as a natural treatment to relieve constipation. Dissolve 2 tsp of Epsom salt in 8 ounces of water and drink it. If you don’t have a bowel movement within 4 hours, try a second dose, but don’t do it more than twice in a 24-hour period.

If you have swollen or sore muscles, you can either soak as I described above or you can make a compress by dissolving 2 cups of Epsom salt in a gallon of warm water, then let it get cold. Soak a towel with it, then wrap it loosely around the area and leave it there for 15 minutes.

This one is controversial because it can be extremely dangerous and it may not work. You’re dealing with battery acid and magnesium; a lot of bad things can happen. That being said, in an emergency survival situation, you’re left to your own devices and you can decide for yourself whether to do it or not.

Dissolve an ounce of Epsom salt in warm water to make a paste, then add a bit to each battery cell. This probably won’t help if the plates inside are worn out or if the contacts between the cells are in bad shape.

Always wear eye protection and sturdy clothes and shoes that the battery acid won’t eat through before you can get it off, just in case. This isn’t something you should try if you don’t have experience. And remember – being prepared by having  a properly maintained car is always better than trying to fix it when you need it the most.

I’m not sure if Epsom salt works well to remove shower grunge and baked on foods because of the chemicals in them (it’s a debate), or if it’s because of the abrasive quality, but making a paste with water and dabbing it onto your shower tiles, then scrubbing will remove grunge, and for pots and pans, soak it in Epsom and hot water, or just sprinkle the salt straight in and scrub.

OK, this one isn’t really for survival, but even if SHTF, cosmetics are going to be important for physical and emotional reasons. Having toothpaste and a clean face can make all the difference in the world when you’re searching for a dab of normalcy. Epsom salt has been a common ingredient in beauty solutions for practically forever, or at least since the 1800s.

You can add essential oils and herbs to them to make bath salts, mix it with coconut oil or water to make an exfoliant (oils are good here, too), and some say that rinsing your face in Epsom salt water will help heal conjunctivitis and sties.

Remember that knowledge is the only thing that can save you in a survival situation.

Click the banner below to uncover more survival secrets that helped our grandfathers survive!