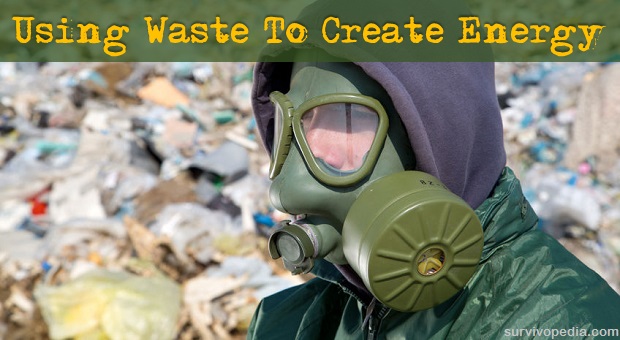 How To Use Waste To Create Energy

As preppers, we have many goals but most of them revolve around a few primary concepts: to be independent, to find ways to reuse and recycle items in order to be as efficient as possible, and to live in a self-sustaining, disease-free environment. Using waste to create energy meets all of those needs.

There are many ways that this can be accomplished. Some are more feasible than others and some are still in the early stages of development. At this moment, there are very few efficient ways to convert waste to energy, especially in a residential setting, but those in the know are working on it.

If we put our collective heads together, solutions may come even faster. After all, that’s how most of these ideas started anyway – in somebody who gave a flip’s backyard.

We thought we had this one solved until we realized that the old-school methods of combustion of garbage was releasing fly ash, toxic fumes, heavy metals and trace dioxins into the air. One of the results of this was acid rain.

Thankfully, modern methods of combustion are much more efficient. Waste gases are passed through lime scrubbers, electro-static precipitators, fabric filters, reactors and catalysts that neutralize acid levels and catch pollutants on their way out of the factory.

It’s been claimed that modern methods of incineration release less dioxins and other pollutants into the air than home fireplaces and BBQ’s (Barbecue).

The basic idea here is that personal and municipal waste (trash) is collected and taken to a facility that burns it in order to turn it into gas that is then converted to electricity. Critics claim that it’s inefficient and uses more energy to process than it creates. That argument used to stand but with improvements in technology, it’s not so accurate anymore.

Also, we’re keeping garbage out of landfills because the original volume of the waste is reduced by up to 95%. That’s certainly a critical factor that should be considered because this is one of the primary goals of prepping – having waste management and energy production systems in place when SHTF. So, the next logical question is, “Can we do this at home?” Of course we can!

Incineration isn’t the only method of converting waste to energy. For that matter, it isn’t necessarily even the most efficient. Other methods include:

Pyrolysis is the creation of biofuels by thermochemically breaking down the waste at elevated temperatures without oxygen.

This is how you make charcoal and convert wood to methanol. It’s also being used with plastics: when you burn them, they release a gas that, when cooled and converted back to a liquid, is oil. Plastics are petroleum-based so when you break them down like this, petroleum is the result. Convert the oil to fuel and you’ve got it.

Pyrolysis isn’t particularly efficient at the residential level because it takes a boatload of heat to cause the chemical breakdown. It’s a simple process though that, with some tweaking, may one day be viable in a survival situation because it doesn’t really require any specialized equipment that you can’t build for yourself.

With gasification, organic matter such as fossil fuels or biowaste is converted into syngas by heating to high temperatures without allowing combustion.

The pros of gasification include an extremely clean end product that can be used directly in gas engines or can be used to create synthetic fuel or electricity, and it’s fairly uncomplicated to do. It’s also sustainable. The downside is that it often takes as much or more energy to perform as the process produces.

An example of gasification is the use of coal to produce gas for the oil lights of the early 1900’s.

Now we’re getting somewhere. Anaerobic digestion is a combination of processes that breaks biodegradable material (read biowaste for our purposes) into a usable fuel without the presence of oxygen. To simplify it, think about the fermentation process used to make beer, wine or bread. That’s an example of fermentation, which is a part of anaerobic digestion.

Another example is the conversion of farm manure to methane. By controlling the process and bottling the methane, we’re reducing the largest source of greenhouse gas on the planet while creating a renewable source of fuel.

Methane can be used in a variety of ways, including being used directly in a combined heat and power gas engine. It can be also be converted into biomethane which can be used pretty much the same way that any natural gas is used. Uses include electric, heating and transportation.

The way that anaerobic digestion works is that microorganisms will eat the organic material, then produce gas as a digestive byproduct. This is an extremely simplified explanation though. Anaerobic digestion actually occurs in four stages: hydrolysis, acidogenesis, acetogenesis and methanogenesis.

On your farm, you can set up your anaerobic digester to work either in batches or continuously. You can also use different temperatures, types of organic material, and levels of complexity. At the very simplest, called a single-stage digestion system, the entire process occurs in one sealed reactor, holding tank or lagoon. This reduces costs but is less predictable and often less efficient.

With two-stage digestion systems, you have greater control over the bacterial communities in your tanks and can therefore control the process a bit more.

If biogas is your goal, you need to be aware of how digestible your waste materials are. Paper waste, grass cuttings, food leftovers, animal manure and sewage are all great starters. Just about any organic material works except wood. For some reason, it’s not really digestible to the bacteria.

This is the process used to convert used vegetable oil into usable biodiesel. It’s a chemical process that exchanges the ester in the oil for an alcohol. That’s usually done by using an acid or a base catalyst. Specifically, the veggie oil-to-biofuel process usually uses lye, methanol and alcohol as catalysts.

There are many different ways of using waste to create energy on a survival farm or even in your back yard. What method you’ll use will depend upon what you want to use the fuel for and what types of waste you have access to.

Beyond that, most of the processes can be completed using simple equipment that you can buy for very little money or that you can make yourself.