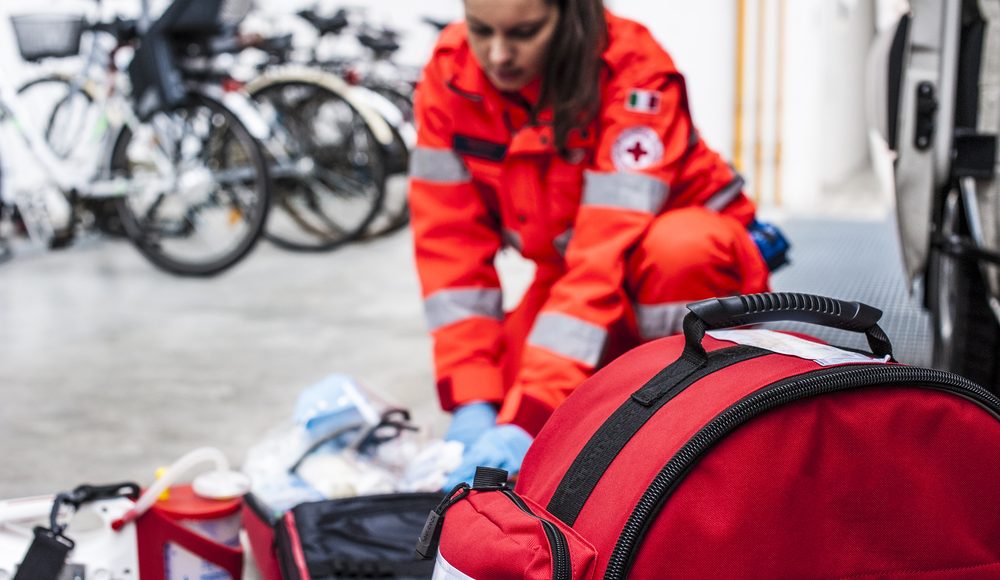 According to survival psychologist John Leach, some 80% of disaster victims freeze up in emergencies, taking no action at all.

Having a plan makes you three times more likely to overcome paralysis in a disaster. This article is about emergency planning at the community level.

We human beings are social creatures endowed with instincts to survive in groups. Once I got my household squared away, I wanted to be able to help others in my community. This leads me to volunteer with a local CERT (Community Emergency Response Team), which put me in touch with emergency managers of my city, county, and state.

When I moved to another part of Cache Valley, I found that my new community didn’t have a CERT and was in sore need of an emergency plan. Be cautious about what you ask for because I was tasked with helping create both in short order.

When the community has a disaster such as an earthquake, the volunteer emergency responder or resident must put themselves and their own house in order before they can effectively assist in the rescue of others.

Now that his or her own home is ordered, our emergency responder can quickly make ready out of a turnout bag to ensure that they don’t forget anything because of the stress and adrenaline rush of the disaster, if they haven’t already done so. Once prepared, they can then help nearby neighbors.

For the purposes of a community emergency plan, a block is a pre-defined area within a neighborhood so that the greatest good can be done with the limited resources on hand at the outset of the incident.

Reporting begins at the individual level and advances to the household, the block, the neighborhood, the area, and then the city. The city reports to the county, the county to the state, the state to the region, and the region report to the federal government.

At the block level, a Block Captain and Backup Block Captain (or Co-Captains) are responsible for walking the block to note which homes are flagged red and green and check on the welfare of homes that are not yet flagged. The block Captains then communicate this information to the Neighborhood ICP (Incident Command Post).

A neighborhood ICP should typically be established upwind and uphill from the incident. Where possible, select a site with intact infrastructure. Reporting from the Block Captains to the ICP can be done on foot, using runners, in geographically small neighborhoods, but the process is much more efficiently handled by establishing a band plan (a band plan allocates specific radio frequencies to each area) beforehand, equipping Block Captains with radios and training them in their use.

Light Search & Rescue Teams triage victims according to the severity of their injuries and quickly treating the three killers (airway, severe bleeding & shock.) These teams do not perform CPR because it limits at least two first responders to treating only one patient, potentially costing more lives.

Extrication teams transport victims to treatment areas a CCP (Casualty Collection Point) where victims are triaged a second time and receive treatment until they are transported or released. Each neighborhood needs an ICP and CCP because patients can only be carried so far on stretchers.

Treatment areas are established according to the severity of wounds and a temporary morgue is established for the deceased. This is located out of sight to be respectful of the human remains and to prevent additional psychological trauma that would occur if it were located next to the treatment areas. The red treatment area should be located closest to the transport area where victims are picked up for transport to medical facilities.

Once the immediate needs have been met in their own neighborhoods, teams of volunteer rescue workers can then be assembled and deployed to areas that are still in need. When a neighborhood or city is hard hit to point that infrastructure and road systems are disrupted, rescuers have to brought in from areas that were not affected, leading to delays of days or weeks, so it important that every household stocks enough emergency supplies to support themselves until that happens.

The ICPs in the various neighborhoods report the numbers of red, yellow, green, and black victims and the city allocates resources based on these numbers. Therefore, by working to see that your neighborhood is better organized than the surrounding neighborhoods, you virtually ensure that it will be first in line for the limited resources that your city has to allocate (and it’s not that hard if the other neighborhoods in your city aren’t prepared at all, which is often the case.)

After reporting casualties, property damage and endangered livestock or pets are reported. The city complies these reports and passes them, along with requests for resources, on up the chain to the county.

From the point of view of the taxpaying residents of a city and the municipality itself, it is important that volunteers report to Staging Areas (trained & credentialed personnel) or Volunteer Reception Centers (for Spontaneous Volunteer Management since they must be trained, equipped and tracked) and signed in and out for safety and because the aid a city receives depends on the number of volunteer hours worked and materials used. Without trained volunteers, communities do their best to clean up after a disaster and then FEMA shows up and says, “What disaster?” Who helped and for how many hours in this alleged disaster? We need names and phone numbers.”

Volunteering effectively requires more that a desire to help others. You may have heard stories of people trying to volunteer, only to be turned away, either by a government agency, the Red Cross or some other entity. Someone buys a bunch of cheeseburgers and takes them to a shelter to hand out and they are turned away. Or a radio station raises a bunch of money and holds a drive send needed money and a tractor trailer full of supplies to a disaster area only to get stopped at the state line or at the disaster perimeter, and there the truck sit, sometimes for months. It happens all the time.

Why does this happen and how can it be prevented? It happens because resources are limited and supplies not requested through official channels can take limited resources away from more pressing matters to deal with them. For example, during an emergency where people had been immersed in cold water, some well-meaning volunteers collected a truck load of blankets (because they thought there were a lot of cold people and blankets would surely help) and dropped them off at the fire station. As the incident progress, another engine was deployed only open the door to the bay the fir engine was in to find the path blocked by a truckload of blankets. In another incident, essentially the same thing happened with a truckload of loose energy bars. Despite the big hearts and good intentions, first responders may not have time to move blankets or shovel energy bars.

When an incident occurs, a perimeter is established because emergency personnel need to know how many first responders and victims are in the disaster area. They also need to keep looters and others seeking to take advantage of the situation outside the perimeter. Sometimes busloads of unvetted, uncredentialed and untrained volunteers show up in tank tops and flip flops. To the incident commander, this is huge liability. They’re obviously ill-equipped and untrained and if he turns them loose in his incident perimeter, he’ll almost certainly have more victims to deal with, which will take more of his precious first responders away from the lifesaving efforts in progress.

Because of these factors, highway patrol and responders managing the perimeter are typically ordered to turn back vehicles of supplies or volunteers that have not be requested through official channels. So how can you volunteer without getting sent away? The solution is volunteer through a volunteer organization that is recognized by the government. You will receive training, PPE (Personal Protective Equipment) and gear or given a list of what to buy. You will be vetted and issued an ID or ID number. Like other first responders, volunteers don’t “self-activate.” We report to staging areas when our team or unit has been activated. You can still help your family and neighbors. You just won’t do it in uniform.

Because saving lives is the first priority, informing the public and performing welfare checks (is my loved one OK?) take a backseat until resources are available to set up a joint information center to take on tasks such as family reunification and assistance, but there are some things you can do to make sure you will be informed.

Getting involved in community emergency planning and response pays big dividends for survivalists. I volunteered out of a desire to serve others, but doing so unexpectedly paid me back many times over. If you volunteer with an organization like CERT, ARES, the Medical Reserve Corps (despite the name, you don’t need to be a healthcare professional to join), a sheriff’s posse or a search & rescue team, you will be among the first people notified of emergencies and new threats. You may obtain training and identification that can help you get past incident perimeters without having to sneak through neighborhoods or back roads risking arrest. I have received tons of valuable training that has greatly improved my disaster readiness and educated me about known threats to my area. It also often offers opportunities to build relationships of trust and network with key emergency managers in your community, county, and sometimes even at the state level and beyond. Volunteering has a lot to offer and does not typically obligate you to respond in the event of an emergency.