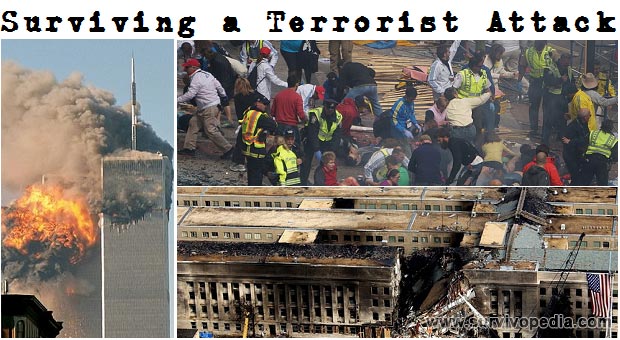 The threat of terrorism from foreign or domestic perpetrators has perhaps never been higher.

Global peace hangs in a tentative balance and America’s stance as a peace enforcer hasn’t won us many friends in the last several decades. Also, there are numerous countries who disagree with our politics or simply seek to usurp us as the most powerful nation on the planet.

Regardless of whether it’s for religious or political reasons, the threat of attack is real; therefore, being prepared for surviving a terrorist attack should be a high priority for everybody.

As in any matter of survival, the key thing is being prepared. Prepping dramatically increases your chances of survival assuming you live through the original attack.

Perhaps the worst thing about preparing for terrorist attacks is that they are totally random and they have the nasty habit of occurring when you expect them the least.

The element of surprise is often a terrorist’s best weapon.  One of the main motives behind  terrorist acts is to create a constant state of paranoia, a psychological tactic meant to instill fear in the targeted population.

Being prepared for a terrorist attack feeds into that to a certain extent – just thinking about terrorist threats all the time can have the same effect as a terrorist act that already happened. However, it’s a matter of finding a balance between being psychologically bullied and being prepared.

Steps to Take for Survival

But there are a few steps to follow, if you want to reduce the risks and increase your chances of survival after the initial attack, so stick with me and find out. Basically, we need to talk about three stages of survival during a terrorist attack: let’s take a look at each one and see how to stay alive:

1. In the first stage of a terrorist attack, the most important thing is that you’re still alive and didn’t die in the first sneak attack – it means you’re lucky. Now you must keep staying alive, hence if you hear gunshots or explosions and you don’t know what to do, go find yourself some proper cover!

2. The second stage of surviving a terrorist attack is to try to escape from ground zero (if you’re at the ground zero).

If you’re inside and the problem is inside, just get out of there! The general rule of thumb when you’re indoors is to know exactly where the exit points are at all times; that knowledge may save your life some day.

If the danger is somewhere outside and you’re inside of a building, stay away from the windows in case of a secondary explosion.  Next, close all the doors and windows, shut off the air conditioning system in order to keep the eventual toxic substances (after an explosion, fire or biological attack) from sneaking inside.

Try to make the building as air tight as possible. If the building you’re in is not severely damaged or burning, you should stay put until you know that it’s  safe to evacuate the premises.

If you think you were exposed to toxic substances, strip and shower as soon as possible. Keep in mind that there are some toxic agents that can react to water in a dangerous way, so keep your eyes peeled in case of anything fishy.

3. In the third stage of a terrorist attack, supposing that you’re trapped inside a building that was taken over by terrorists, things can get messy. Basically you have two choices : being a sheep or being a wolf. You can wait for somebody to save you if you’d like.

The other choice is to fight for your life. Use a piece of broken glass, a knife, a heavy object (use your imagination) and hide somewhere hard to spot. If you can escape to get help, do so unless you’re a trained combatant. Terrorists are generally trained fighters and you don’t want to go head-to-head with them unless you’re capable of doing so.

When the opportunity arrives, do what you have to do to survive. If you’re forced to fight, fight to kill. If you defeat the terrorist, you can use his weapons/body armor for your escape. Improvise, think ahead! Obviously, if you go for this course of action, you should be physically fit and capable of fighting. Otherwise, you’re going to be dead fairly quickly.

The most important thing in a survival situation is to stay calm and to use your head. Fear is natural but don’t let it control you. Try not to panic, use your common sense, and stay safe. Having a first aid /survival kit with you at work/in your car at all times will dramatically increase the chances of survival in case of injury.

The bottom line is that in a terrorist attack, you’re going to have to keep it together. Fighting may be your only option but if you can escape, do so unless you’re trained in combat. Otherwise, you’ll just end up dead and you may get others killed along with you. Do what you need to do to survive.