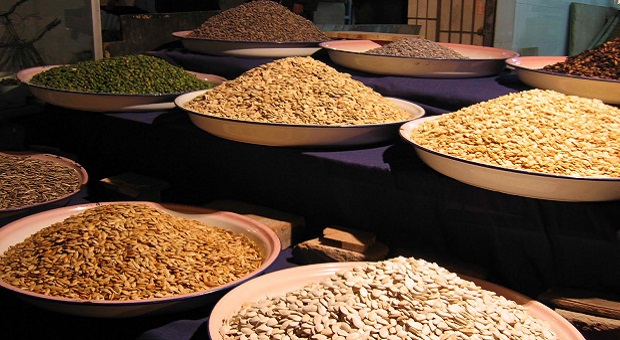 Save Your Own “Survival Seeds” [Part 2]

Seed saving techniques vary from crop to crop, but typically start with having a good gene pool from the start.

Most crops that cross pollinate will need a number of parent plants of the same variety to prevent inbreeding. Inbreeding is when related plants (i.e. siblings or relatives) mate or cross.

This causes the offspring to have limited genes, which means that they may not grow well or survive stress. This is important for seed savers to remember if they want productive gardens year after year.

Sharing seed with other folks in your region is another great way to prevent inbreeding depression. This essentially injects new genes into your gene pool.

In order for plants to set seed, they have to be able to flower, and in order to flower, they must have a long enough growing season. If you have a hard frost while your crops are flowering, it may kill the crop or prevent seed from growing. This may mean that you need to start some of your crops indoors in order to give them a long enough growing season.

Once your crops have flowered and begun to set seed, you must pick a number of individuals to gather seed from. The more plants that you choose the better, but it’s also important to exclude plants that seem weak, have diseases or are less productive than the others. Choosing seed from the healthiest plants is wise, but make sure that you’re still choosing seed from as many of your healthy plants as possible to prevent inbreeding depression.

Allow the seed to mature on the plant. Harvesting seeds before they are ripe may reduce their viability (i.e. it may kill the developing seed). This is a tricky business- seed must be harvested once it is mature, but before the plant begins to “let go” of the seed. Most plants don’t hold onto their seeds forever.

At a certain point, the plants begin to allow their seeds to be released or spread a number of different ways. For the gardener this typically means that the capsules containing the seeds will begin to break, shatter or even explode, spreading the seeds out on the ground around the parent plant. It’s important that seed savers observe their plants and remove the seed before this stage.

Collecting the seeds is a fairly simple procedure- the seed pods should be picked, or seeds stripped from the plant by hand. Because there are so many different types of seed pods, this procedure can be different for different plants.

Crops like lettuce that send up a spike can be hung to dry over paper bags or cookie trays to catch the drying seed. Some crops like tomatoes and cucumbers may need some extra work to get the seed cleaned up and ready to store.

For many greens and crops like beans, the seed is ready when it is dry. Bean pods should be dry and hard when the beans are harvested, and the beans should have dried down so that they rattle in the shell. These seeds are already dry, so they typically don’t need a long drying period.

These seeds are also fairly simple to remove from the seed pods- either by rubbing the pods between your hands, crushing, or cracking the pods by hand. Many other seeds must be processed and rinsed before they can be saved and stored. Here are a few:

Peppers: When peppers are very ripe, they can be cut open and the seed removed from the central cone. The seed should scrape easily from the flesh of the pepper. The seed can begin the drying process immediately without rinsing.

Eggplant: Several eggplant fruit should be left on the plant. When they harden and begin to shrivel slightly, the eggplant can be cut open and the seeds removed. The seeds can be treated the same way as peppers.

Tomatoes: Tomatoes are tricky because the seeds have a fleshy, gelatinous sack around them that needs to be removed before the seed can be dried for storage. To remove this sack the traditional way, squeeze or scoop the seed from the ripe tomatoes into a bowl or jar. If there isn’t much seed, add a little water to the seed mass.

Cover the bowl or jar with a cloth and allow the jar to sit to sit at room temperature, out of direct light for several days. Stir the seeds once or twice a day. Soon you will begin to see mold or fungus grow on the surface of the seed mass. This mold will essentially eat the slimy coat around the seeds.

This sack is nature’s way of preventing the seeds from germinating inside the tomato, and the fermentation of this coat is the tomato plants way of removing the coat so that the seeds can germinate, but also using fermentation and the fungus to produce antibiotics that destroy viruses and bacteria that would otherwise infect the seed.

After several days, pour some water into the jar. Bad and immature seed as well as the decomposing sacks will float to the surface and can be poured down the drain. The good seed will sink to the bottom of the jar. You may need to pour water into the jar several times, but you will eventually end up with pulp-free, good tomato seed that you can strain out and dry for storage.

Squash and pumpkin: Squash and pumpkin seed should not be harvested until it is very ripe- squashes should be left on the vine until they harden up. Chop the fruit open and scoop out the seed- wash the filaments and flesh from the seed using slightly warm water.

Dry seed in a cool dry place over the course of several days- dry seed will be brittle rather than flexible. Do not dry seed in an oven as the heat will kill the seeds.

Once the seeds are dry they can be stored. Beans, peas and other legumes prefer to “breathe,” and should be placed in a plastic bag with some air exchange. Most other seed can be stored in mason jars, or in plastic bags inside of mason jars.

Seed must be stored in a dry, cool, dark location to keep it viable. A dry cellar out of light is the best type of location. In humid environments it pays to purchase silica gel packets (or recycle ones from products you purchase) to include in the seed storage jars. This will keep humidity low and prolong the shelf life of your seed.

Most seed will last for several years if stored in this manner.

Seed saving can be a huge benefit to anyone interested in self-sufficiency. For many gardeners, seed saving allows crops to adapt and respond to local conditions, resulting in productive, resilient crops over time.

The diversity of crops grown on this planet has plummeted over the last 100 years, and with it the resilience of agricultural systems. In this regard, saving seed helps reduce the losses of ancient, well-adapted crops to the onslaught of commercial seed companies and monocultural systems.

Seed savers are not only providing for their families and preserving a legacy thousands of years old, but also protesting the new, unsustainable ways of producing food. Saving seed is not only a wise thing to do, but a fun thing to do as a family! Kids love helping save seed, and teaching them how to be more independent and live sustainably is an incredibly fun and rewarding activity.

Now you have the information you need to get started. You have the ability and knowledge to begin harvesting, cleaning and storing seed from year to year, saving money, growing better crops, and living more independently. Have fun as you put this information to use and start down the road to seed independence.

This article has been written by Nate Storey, PhD for Survivopedia.

Nate Storey is the Co-Founder, Inventor and CEO at Bright Agrotech - a innovative vertical farming systems startup seeking to empower commercial growers and home gardeners alike grow more with less space with their vertical farming towers and products. Dr. Storey continues to research the use of tower production techniques to increase productivity and reduce costs for hydroponic and aquaponic growers. Dr. Nate lives in Laramie with his wife and baby daughter.