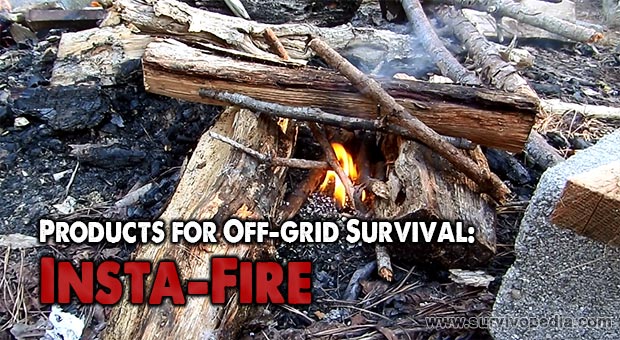 When I check out new fire starting products, I start off by choosing an old and reliable system to compare it to. The challenger in this instance is Insta-Fire, and the old faithful is a tea light candle. Insta-fire is advertised as a kindling substitute and fire starter.

The tea candle, on the other hand is used for many different things around the house, and is also an excellent fire starter when used with kindling.

In order to see if Insta-Fire is really any better than tried and true methods, I thought it would be useful to build two camp fires with dry wood and two using very wet wood. May the best system win.

Insta-Fire combines wood pellets, paraffin wax, and volcanic rock into something that resembles cat litter.  This patented formula is supposed to reach temperatures of 1000 degrees, thus making it possible to start fires in wet, windy, cold, and even icy conditions.

Insta-Fire is supposed to be able to resist all kinds of severe weather, is non-toxic to the environment, and lights up easily. Since it is non-volatile, it ships readily by US mail and can be stored in just about any area. According to the manufacturer, Insta-Fire is a very clean burning fuel that will not explode, nor will it catch fire without being lit.

The Insta-Fire product is packed and sold in the following packaging:

Since Insta-Fire essentially combines kindling with a fire starting agent, it can be used just about anywhere you need to build a fire, regardless of the conditions.

As long as it is safe to have a fire in the area, you can use Insta-Fire. Some people carry and use Intra-Fire when hunting, fishing, camping, during emergencies, or for other outdoor activities. You can also use Insta-Fire as a free standing fire. Insta-fire is suitable for use in an emergency, or if you are in an area that has no fire building materials.

The manufacturer states that Intra-Fire can be used to make a free standing fire: just pour one cup of the Insta-Fire on the ground and light it to gain heat for about 15 minutes.

What is a Tea Light Candle

A tea light candle is a small candle encased in metal. It is about the size of a fifty cent piece, and about 1/4 – 1/2 inch tall. These candles last about 4 hours and produce a good bit of heat and light. When used as fire starters tea lights will burn until the fire is started and the candle wax burns up.  You can get 16 tea lights at the dollar store for $1.00.

For this test, the weather was a nice sunny dry day with a temperature of about 65degrees, variable winds of 20 to 25mph from the southwest with gusts to about 40mph.

As the manufacturer recommends, to start this fire put about 1/2 of a cup of Insta-Fire on the ground. Put two logs parallel to each other around the Insta-Fire. On top of these logs place two more logs parallel to each to other to make a square. Light up the Insta-Fire, and keep adding logs two at a time to make the squares until they are 4 layers deep. Add extra wood as needed, making sure not to smother out your fire.

The first Pyramid fire was built with dry wood. I used 1/2 cup of Insta-Fire on the dry ground without kindling and lit it. As the fire grew I added dry sticks to the fire to get the logs in the Pyramid fire lay to take. This fire was a little slow to get started and put out a lot of smoke, but not a lot of heat.

As time went by the fire did get much hotter and could be used to cook on.  It took almost 2 minutes for the logs to catch fire, and remained smoky throughout the burn period.

The second Pyramid fire was built on wet ground using water soaked wood. I put down 1/2 cup of Insta-Fire on the wet ground without kindling and lit it. The fire grew at a slow pace as I added more wet wood to it, forming a Pyramid fire lay. The upper layers of wood were very slow to dry out. Once again, there was not much heat given off, but a lot of smoke, and it took about 5 minutes for the wet logs to begin catching fire.

The first Pyramid fire was built with dry wood. I put the tea light candle in the middle of the fire lay. Then I placed the dry kindling around it. When I finished, I lit the candle. The fire was very quick to start and had less smoke and more heat than the fires started with Insta-Fire.  Time wise, it also took less than 2 minutes for the logs to catch fire.

The second Pyramid fire was built on soaked ground using soaked wood. I put the tea light candle in the middle of the fire lay. Then I placed wet kindling around the candle and over it, then   built the final Pyramid fire lay. When finished, I lit the candle. The candle lit the kindling and began drying out the soaked wood.  The fire grew at a fair rate, and logs began to burn at around 4 minutes.  This fire was not as strong as the dry fire version, but still better than the Insta-Fire wet version.

While I think that Insta-Fire is an interesting compound, I can’t say that there are many situations where I would use it over a cheaper, easier to carry tea light candle. That said, for those less experienced with building and maintaining fires, Insta-Fire can deliver at least some security and confidence.

Overall, my observation is that Insta-Fire does work as advertised, but it is not necessarily better than other options. My recommendation is this: go back to basics, learn how to build fires in all conditions without using Insta-Fire, and then just carry it in your bag for emergency purposes.

Find out more about off-grid survival on Conquering the Coming Collapse. 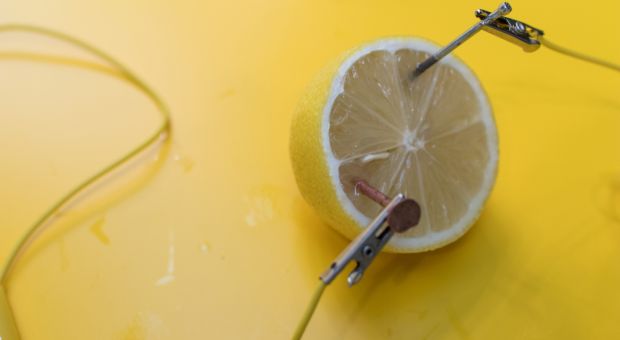