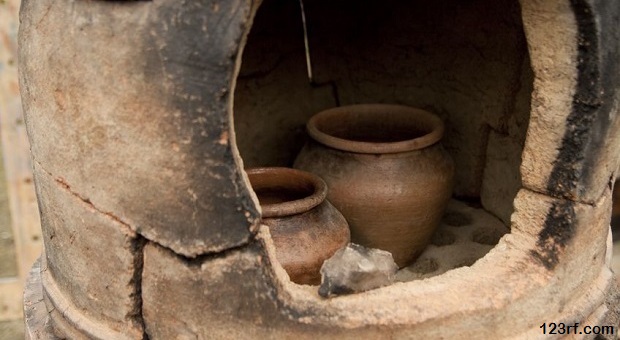 In previous articles, we’ve discussed how to extract clay locally, how to throw clay on a potter’s wheel, and how to build your own potter’s wheel.

The next and final step is firing your clay so that it’s durable and, in the case of stoneware, usable for storing food.

Greenware, which is what clay is called before it’s fired, can’t be used for storing much of anything because it’s extremely delicate and porous. The process of firing clay pulls the remaining moisture out of the clay and actually melts the clay so that the particles meld together and make the clay as strong as it can possibly be.

This process is called vitrifying, and it means that you’re converting something into a glass-like substance, typically by using heat.

Fun fact – glass is actually made by melting sand particles together! I threw that in to help you understand what happens during the firing process. This isn’t a process that you can do in a home oven because you need temperatures of at least 1100 degrees F to vitrify clay.

Different clays vitrify at different temperatures. For example, earthenware clays contain impurities such as iron and other minerals which somewhat degrade the durability of the clay. Therefore, it typically vitrifies at temperatures between 1300- 1900 degrees F depending upon the type of clay. This translates to about cone 018 to cone 3, which I’ll explain in a bit. It’s also about the temperature of a bonfire, so you can vitrify your earthenware in that manner.

The downside of earthenware is that, because of the impurities, it’s difficult to get it to vitrify enough to make it waterproof, even with glazes. Earthenware I porous and much softer than stoneware once it’s fired. It’s great for making such items as tiles, bricks, decorative pottery, and planters.

Stoneware doesn’t have the level of impurities that earthenware does, so it vitrifies at higher temperatures and melts more thoroughly. You’ve surely heard of (and probably used) stoneware crocks, plates, mugs, and decorative items. Stoneware can be made waterproof with the use of glazes and can therefore be used to hold water and food.

Stoneware vitrifies at temperatures of 2100-2372 degrees F (cone 3 – cone 10). Because of how well it vitrifies, it bonds well with glazes and can be completely waterproof assuming it was fired properly. It’s also extremely durable compared to earthenware.

Note of warning: If you fire clay beyond its vitrification point, it will first slump, then bloat, then melt all over your kiln, making a royal mess. If you think about it logically, this makes sense; you’re melting the clay particles, right?

If you’re working with clay that you’ve sourced yourself, test it starting at lower temperatures and work your way up so that you don’t ruin a whole firing, or make a huge mess in your kiln from firing it too high.

I cannot stress the importance of letting your piece dry to bone-dry enough – if there’s too much moisture when you fire it, it will explode.

You use glazes to make your pottery waterproof, food safe, and/or pretty. They’re made from many different materials, depending on what you want it to look like and why you’re using them. Some glazes can be put on greenware and some can only go on bisque and thus requires a second firing.

The absolute best site that I found about making and using natural glazes, especially for earthenware and pit firing, is this one. Packed with good info, based on the concept that you’ll be doing this in a post SHTF situation.

How to Fire Your Pottery Outdoors

I’ve used this method several times and absolutely love it. It nets some of the most beautiful designs I’ve ever made, and the best thing, at least to me, is that there are so many design options.

You can sprinkle different minerals onto the greenware to make some awesome colors. For example, copper oxide turns anywhere from blue to green, and I’ve even had friends tell me that they got purple hues. It depends on the composition of your clay, too.

You can also add textured items such as leaves or netting. Press them into the clay when it’s still impressionable, and when you fire it, the leaves or netting or whatever burns off and the design is left behind. You can wrap it in newspaper, or t-shirts soaked in salt or other minerals for different effects – it’s just a matter of what you can imagine.

This method dates back tens of thousands of years. It’s exactly what it sounds like – you dig a pit and fire your pottery in it. Here are the exact steps:

There are a few other methods that you can try, too. Check out Up in Smoke Pottery’s website – they have great info and pics there for different ways to fire your pottery outdoors.

Also, Simon Leach, one of my favorite potters that we discussed in the article about how to build a potter’s wheel, creates a really cool little kiln/pit cross that only needs a few cinder blocks, some chicken wire, and saw dust. Check his video below:

Eduardo Lazo shares some cool techniques for color and texture, too.

The art of pottery has been around for millennia and will continue to be an integral part of our world, pretty much regardless of what happens. As long as we’re here, we’ll need vessels to carry water and to hold food and medicine. Pottery is great for all of that and now that you know that the clay can be locally sourced, there’s no reason why you aren’t already doing it if you’re so inclined!

If you’ve pit-fired pottery, please tell us about it in the comments section below.