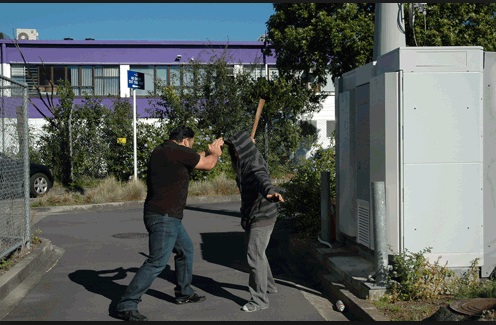 Whether you live in an urban, suburban or more rural area, the topic of self-defense is a pertinent one and well worth discussing. With petty and violent crimes alike happening virtually everywhere these days, more and more people all over the world are taking an interest in various methods of self-defense.

It’s a well-known fact that criminals tend to choose ‘easy’ targets, preying upon those who are unaware or who don’t see them coming. With a bit of knowledge and a little effort, you can ensure that you and your loved ones aren’t the easiest targets around.

The matter of self-defense can be approached from several different angles, ranging from taking up a martial art to carrying a legally concealed firearm or installing a sophisticated home security system on your property.

In a post-SHTF scenario, self-defense becomes all the more important because of the likelihood that established law enforcement will have broken down. If an emergency strikes and you’re well-prepared but your community isn’t, you can bet it will only be a matter of time before someone sets their sights on you or your family and your supplies.

Good situational awareness is one of the most effective methods of self-defense you can practice. By paying attention to your surroundings and behaving accordingly, you can avoid most of the situations that could lead to physical confrontations or violence.

This means being cautious if you have to go out at night, and avoiding unnecessarily dangerous situations. Men and women alike are most vulnerable when they are alone, so by practicing good situational awareness you can deprive would-be attackers of the opportunity to catch you alone or unaware.

The Element of Surprise

Most criminals rely on the element of surprise in order to overpower their intended victims. If you’re practicing good situational awareness, then you’ll have already drastically reduced a potential attacker’s ability to sneak up on or surprise you. The time may come when you are caught off guard, though, and it’s important to keep your wits about you if that happens. Keeping a clear head can allow you to turn the tables around on your attacker by surprising them instead.

A well-placed head-butt to the nose of an assailant is often sufficient distraction to give you enough time to run away and put distance between yourself and the attacker. If the attacker is a man, a swift kick to the groin can be equally effective, though some people have qualms about this ‘low blow.’ In a desperate situation, even a pen can be turned into a useful self-defense tool.

Taking up a martial art can be a bit of a commitment, but the value of taking a class even once or twice a month can be immense. There are many different types of martial arts, including karate, judo and aikido, and you won’t become a master martial artist without years of practice and training, but you can develop basic self-defense skills to protect yourself and your loved ones.

Some martial art schools may include lessons on fighting with a staff, a sword or a knife, while other schools focus solely on unarmed combat. One thing most martial arts have in common, though, is that they level the playing field a bit. Women and children of all ages and even the elderly, as well as grown men, can study a martial art and gain reliable, usable self-defense skills in the process.

Non-lethal weapons such as a taser or pepper spray are also great tools in your arsenal of self-defense. Pepper spray is a popular addition to many women’s purses, but it’s also carried by police; it’s simple to use and quite effective if you can spray your would-be attacker in the eyes with it.

A taser can be a bit more cumbersome, and may require some practice for ease of use if an emergency ever crops up where you have to deploy it, but a few thousand volts of electricity are enough to stop most attackers in their tracks. In either case, once you’ve interrupted your attacker, immediately make a break for a safer location.

To borrow a term that is heard more often in Europe, cold weapons include knives, brass knuckles, swords, slingshots, bows & arrows, spears and other weapons that do not rely on combustion or gun power; i.e. cold weapons encompass pretty much all non-firearms.

For self-defense purposes, knives are probably the most common of cold weapons. In our modern world, most people don’t use swords, bows or slingshots much anymore, but knives are still carried in many regions, particularly where carrying a firearm is prohibited.

If you choose to carry any sort of cold weapon, though, there are a few things to keep in mind. First, make sure that the weapon is legal to carry in your area. Second, remember that any weapon you choose to carry is a weapon for your attacker to potentially use against you if they can disarm you. So if you choose to carry a knife, for instance, you may also want to take some basic courses in knife-fighting and weapons retention skills.

One of the few times when cold weapons like a slingshot or a crossbow can come in handy, however, is after TEOTWAWKI or in a post-SHTF scenario. In such scenarios, the use of a bow and arrow, a slingshot or even a sword or a spear can be advantageous because these weapons are all discreet. In addition to being silent, many crossbows and regular bows can fire arrows or bolts with enough force to penetrate through modern body armor; great for hunting and defense.

When you use a handgun or a rifle, you generate a significant amount of noise in the process, and that noise can help marauding raiders pinpoint your location, plus it just plain draws attention to you. In a time when you want to be as invisible as possible, using a bow, a spear or a sword in lieu of a gun can help you stay below the radar, as it were.

A lot of people who are interested in self-defense have opted for what can seem like an easier route: they apply for a concealed carry permit and purchase a handgun. Unfortunately, carrying a firearm can present a double-edged sword in its own right. Like other weapons, if you carry a gun your attacker may disarm you and could then use your own weapon against you. There is also the possibility of accidental discharge when you carry a firearm, and the injuries that can result.

With that said, a gun can serve as one heck of a deterrent against an attacker, especially if he or she doesn’t have a gun. If you feel comfortable carrying a firearm for self-defense, it can be a powerful tool for protecting your life, but be sure to practice regularly with your service weapon and to maintain extremely safe handling practices with your firearm.

When a handgun won’t do the job, you may consider the use of a shotgun or a rifle. Shotguns and rifles are especially useful if you live in the countryside and may face threats from bears or other wildlife in addition to potential human threats.

A rifle with a good sight can also transform your property’s security in the event of society breaking down and civil chaos ensuing. With a good rifle, a box of ammo and a decent vantage point, you’ll be in a better position to defend yourself and your property against unwanted intruders if you ever have to.