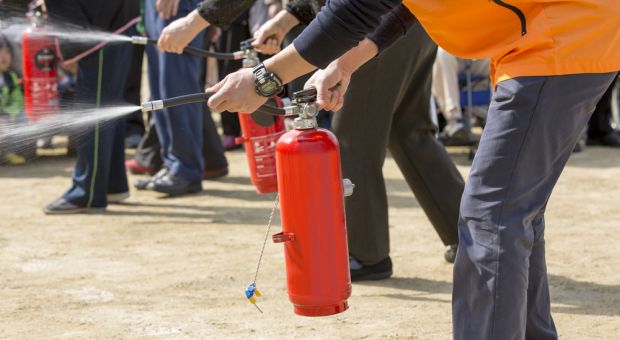 How To Use Fire Extinguishers For Self Defense

Defending yourself and your family from any number of situations can be complicated by many things.

Surprisingly enough, something as simple as a fire extinguisher can be used to stop anyone from a home invader intent or rape or murder to an active shooter in a school or other setting where large numbers of lives are at stake. Knowing how to use fire extinguishers for the purpose of self defense can easily save your life.

An Introduction to Fire Extinguishers

Regardless of the type or size of a fire, it must have the following four elements:

Here are the basic types of fire extinguishers you are likely to encounter and some defense considerations.

As you can see, their classification matches the fire types they are meant to be used on.

These portable, hand held multi-purpose fire extinguishers are the most popular in use today. When aimed and deployed against a fire, they spray a very fine chemical powder called monoammonium phosphate. This powder blankets the fire and suffocates it. ABC powder extinguishers work on all Class A, B, and C fires. Monoammonium phosphate will also break the chain reaction that is often associated with Class B fires. Since this powder is not an electrical conductor, it is also safe to use on all Class C electrical fires.

The average ABC fire extinguisher weighs about 5 pounds and is made of aluminum. The weight makes it a good bludgeoning weapon that can incapacitate an individual. To achieve this, however, you will need the element of surprise on your side. Chances are, you will not succeed if the perpetrator is armed with a gun or knife. Using an extinguisher as a bludgeoning weapon requires the user to use both hands to get a good grip on it. Since both your hands will be full, it won’t leave you a way to divert the attacker’s weapon or disarm them.

Insofar as self defense, you will find ABC powder extinguishers are some of the best to use in both home and public places. Usually, there are several of them in any given public building and located in prominent locations. They are easy to operate and very effective once deployed. The average 5 pound dry chemical fire extinguishers can shoot a stream of powder 15 to 20 feet and will cover an area much larger than the area covered by pepper spray. The high pressure emitted by these fire extinguishers can be enough to slow, stop, or otherwise incapacitate active shooters, or other criminals.

The dry powder chemical stream creates a large thick choking cloud that can defuse the situation quickly. Getting a lot of the dry chemical powder in your eyes can cause tearing and burning. If the powder gets into your nose and mouth, it can cause nose and mouth irritation, and possible breathing problems. The diversion caused by spraying down the attackers could give someone else time to disarm the attackers and/or depart the danger area. 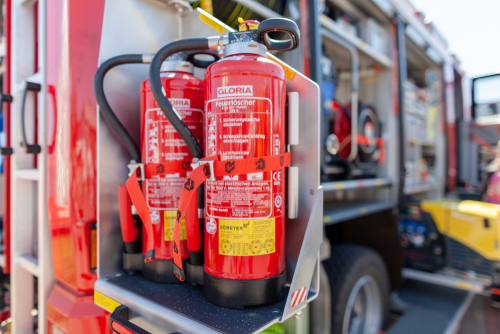 Consider a situation where an active shooter has their back to you. Spraying quickly from behind may be enough to stop them and cause them to turn in your direction. Once they turn, you will have to fire the extinguisher again at their face and hope they don’t fire the gun at you.

Of course, if you were carrying a gun instead of being prohibited from doing so by “no gun allowed” signs, then you would not have to take the risk of being slaughtered while trying to defend yourself and others. As an aside, if you are in a public place with “no gun allowed” signs and you have to use a fire extinguisher for self defense, you can and should expose the business for failure to protect you while on their property via social and mainstream media venues.

It is also absolutely necessary to sue the business specifically related to not having sufficient security guards to secure the premises and also preventing you from defending yourself. You should also file with the BBB and other consumer protection groups, especially if you have already been injured in these establishments, mugged, raped or stalked in their parking lots, or otherwise become the victim of a crime while on their property.

Even though random shooters tend to be unprepared for people to fight back, terrorists are ready for anything.

You can expect to have to fire in their face in order to temporarily blind them. In order to succeed, it may take two or more people to stop the attack. The first person with the fire extinguisher would spray the perpetrator until the canister is empty, and then beat them with the empty cylinder. Other people will need to take action to disarm the person or do whatever else it takes to stop them. Unfortunately, the vast majority of gun control advocates never seem to recognize, let alone admit the fact that the only thing that can stop a criminal with a gun is a non-criminal with a gun. No sign, law, restraining order, or “people/society should not…” will change that.

Class K extinguishers are a specialized type of wet chemical extinguisher that uses potassium based solution. While it is mainly designed for kitchen related cooking fires, it can also be used on Class A wood or trash firers. This extinguisher works in two ways. First, it cools the fire with a mist. Second it combines with fats or grease to form a thick soapy substance that seals the surface of the liquid. This  prevents flash back re-ignition.

While they can irritate skin and eyes, they don’t have sufficient force to knock a perpetrator over. Since they weight around 5 pounds, they can also be used as a bludgeoning tool. Overall, I don’t recommend them as a primary fire extinguisher for self defense.

This fire extinguisher uses pressurized CO2 to put out Class B fires (of flammable liquids) and can also be used to safely put out electric fires. CO2 acts to remove oxygen from the fire, thus suffocating it. CO2 extinguishers are very clean to use because they don’t leave any additional residue to clean up. 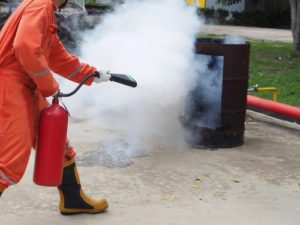 These extinguishers usually weight 10+ pounds, which can pose a problem for some people. They are also not as safe to use. If deployed incorrectly, you can get frost bite if the CO2 lands on your skin. When aimed at the perpetrator, the CO2 will cause immediate freezing of unprotected skin or eyes and carbon monoxide poisoning.

If you are going to have a CO2 extinguisher at home, bear in mind they can be very expensive to refill. They must also be properly maintained. This includes yearly cylinder service and testing, plus a 10 year pressure test. Aside from making sure the extinguisher will work in an actual emergency, annual maintenance reduces the risk of the handle being blown from the cylinder or cylinder cracking and releasing its contents into your home.

Overall, if I had to choose between an ABC and a CO2, I would go with the ABC for self defense. If no ABC is available, a CO2 would be my second choice.

These extinguishers work by using a type of foam that expands when it comes into contact with air and forms a blanket over the fire. This foam blanket prevents the water vapor generated by the burning process from rising. When this is done properly, the fire dies from lack of fuel and oxygen. The trapped water also creates a cooling effect that helps to kill the fire faster. Foam extinguishers work well on Class B flammable liquids such as gasoline, but don’t work on gaseous fires. The Foam extinguisher can be used on Class A fires that involve solid combustibles like wood.

These extinguishers work fine for fires, but have mixed results when used as a self defense weapon. They don’t have the force or shock power to knock down an attacker or otherwise deter them.   Even though the foam may irritate skin and eyes, it isn’t likely to be a sufficient deterrent. On the other hand, the canister weighs about 5 pounds and can be used as a bludgeoning tool.

This type of fire extinguisher uses a gas that reduces the oxygen levels and impedes the chain reaction. The gas is stored in it’s liquid form. When the extinguishers are activated, the liquid form is released into the air where it converts back into the gas state. Clean agent extinguishers do not conduct electricity, leave no residue, and dissipate quickly. Typically, these extinguishers use Halon gas and may be found in rooms filled with electrical equipment and computers. This extinguishing system can also be used for Class B and C fires.

Of all the fire extinguishers, these are the worst for self defense. They don’t irritate eyes or skin, nor do they cause breathing problems. Although they do remove oxygen, it isn’t enough to incapacitate a perpetrator. A portable extinguisher canister will weight about 5 pounds. You can use it as a bludgeoning tool if you had to.

These fire extinguishers are great on fires, but are almost useless as a self-defense weapon. The mist isn’t emitted forcefully enough to deter a human attacker. It might act as a minor distraction, but I would not risk my life on it…

How To Use Fire Extinguishers for Self Defense

Before using any type of fire extinguishers as a self defense weapon, you must learn how to use them safely and correctly. To do this I would recommend taking a good fire safety training course and get some experience actually using them on fires so that you can take that information and adjust it for self defense purposes.

To use fire extinguishers remember the word PASS:

What to Do After Being Sprayed By A Fire Extinguisher

The following are general First Aid measures to use if a person is sprayed by a fire extinguisher:

In a time of great need for self defense, fire extinguishers can be used with varying degrees of success. A great deal will depend on the kind of fire extinguisher that you have on hand as well as the kind of weapons that the attacker has. Since all public buildings and garages have fire extinguishers in plain sight, you can and should learn how to use them as a last ditch defense. You can also use them for home defense if nothing else is available.