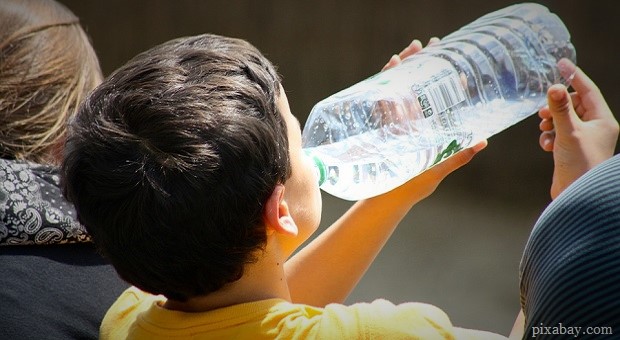 4 Ways To Solve Hydration During A Disaster

You can go for several days without food, but going without water for more than a day isn’t an option.

Especially if the disaster destroyed your home or took out your power, you’ll fade fast after twenty-four hours.

Your judgement and cognitive processes will be compromised and your energy will flag. Then after a few days, your organs will shut down and you’ll die. It’s as simple as that. If your disaster involves extremes of temperature or the need to stay on the move, your window is even shorter.

So what do you do to stay hydrated when you’re in a disaster? 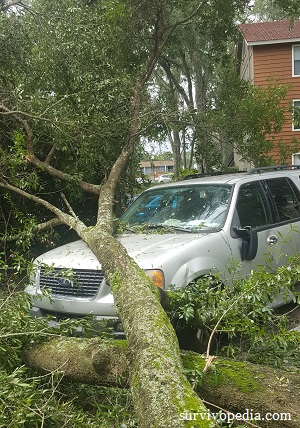 I can tell you from personal experience (I live in Orlando, Florida) that if a major weather event is announced, people lose their minds. Many of them quite literally buy 15 or 20 cases of water that they won’t need but that makes it impossible for you to buy a single case.

Of course, after the emergency is past, they’ll return it all en mass (seriously – I’m writing this immediately post-hurricane and it’s happening as I type). But that won’t do you any good for the days that you may be out of power.

So, it all goes back to being prepared before the emergency is upon you. Most everybody drinks bottled water so keep a couple of cases around. Restock as you use it then you don’t have to worry about that dingbat that believes the sky is falling and she needs 15 cases of water and 40 cans of tuna.

Gallons of water are dirt cheap, too, and you can get more water into the same space as a case would consume.

If you don’t have enough stocked back to allot a gallon per person per day in case you lose power or something else interrupts your access to water, get it in gear. As soon as you hear the first whisper of a significant weather event, go shopping.

Please, though, buy what you need, but don’t be ridiculous about it. A gallon of drinking water per person per day is enough for hydration and minimal personal needs such as brushing your teeth or cooking a can of condensed soup.

When calculating your water needs, take extreme weather into account. If your power is out and you don’t have air conditioning – or heat – your body will need more water to stay hydrated. In the heat, you’ll sweat it out. So include at least an additional 8 ounces, and 16 are better.

If you’re going to be working hard and sweating profusely, allow an extra 36 ounces. As a baseline to determine your water needs if you’re inside and not sweating it out, divide your body weight in half and that’s the number of ounces your body needs. If you need to trim it back a little, that’s fine for a short time. But don’t cut it back by much.

If you don’t have the space to stockpile enough water on a regular basis, or you just got caught unprepared, then chances are good that you’ll be facing empty shelves at the store.

I personally always keep a couple of cases of water around just because we go through it, but when that a hurricane is heading our way, I stockpile tap water in milk jugs.

I don’t recommend storing water in milk jugs long-term because the plastic is thin and easy to puncture, but for the short-term, they’re great. There’s nothing wrong with faucet water in the case of emergency, and it won’t cost you anything over your regular water bill.

The same thing goes for ice. Most of us are big fans of multi-purpose products, so once you fill up your jugs with water, pop them in the freezer. Then you’ll have ice and drinking water in the same container, and solid blocks of ice melt much slower than smaller cubes.

One water need that many people don’t consider is having enough to flush the toilet. After a few days in 90-degree weather, an unflushed toilet gets foul and can actually be a health hazard.

So what do you do? Fill up the bathtub before the storm! That water will even work for drinking water if need be or can be used for personal hygiene or washing the dishes before you use it to flush the commode. 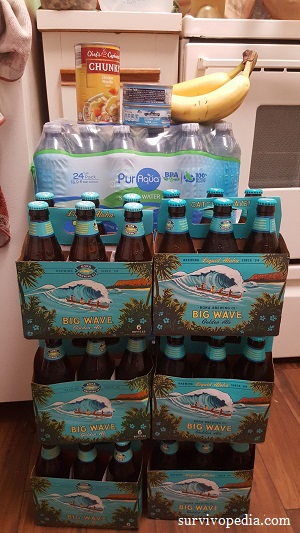 It’s always the water that people rush to snatch off the shelves, but it’s not your only option for proper hydration.

It’s most certainly the best, but it’s not the only option. You can use sports drinks – not energy drinks! – to meet some of your hydration needs.

Club soda usually has small amounts of table salt, potassium bicarbonate, or sodium bicarbonate to add a slightly salty flavor. It always surprises me when I see the water shelves cleared off but the club soda is still well-stocked.

Other comparable substitutes for part of your water needs are tea and coffee, but they’re diuretics, so don’t substitute more than a cup or two and go for.

Coconut water is also an excellent substitute – maybe even better for water for hydration. A note of warning for those of you who haven’t had coconut water: it’s an acquired taste and it doesn’t taste like coconut.

Sports drinks and club soda may be most effective following physical exertion because your body has just expelled minerals as well as water and these drinks are specifically designed to replace what you lost.

You may not consider it, but pre-made Jell-O is also hydrating but it’s also full of sugar, so tread carefully.

If you’re on city water, you probably won’t lose water, but that doesn’t mean it’s safe to drink. Main lines break or flood water breeches them somewhere along the way and contaminate it so pay special attention to local official warnings to boil water.

If you’re on a well, it’s always best to assume the worst and boil your water for at least a minute before you drink it. Sanitation tablets also work, but you need to let the water sit for an hour or so in order to give the sanitizing solution time to work.

This isn’t just a matter of being cautious – it may actually mean the difference between being healthy and being sick. In another article, I discussed the dangers of post-disaster contaminated water, but to summarize, the bugs that contaminate your water often cause diarrhea or vomiting – both of which contribute to rapid dehydration.

So, your drink water to hydrate and it’s swimming with bacteria that make you lose hydration. Boil and sanitize your water if there’s any doubt whatsoever about its cleanliness.

And whatever you do, don’t drink from springs, ponds, or rivers without purifying and sanitizing it first.

Water isn’t optional regardless of your situation. If you need to ration, do so, but make sure that you’re getting at least the minimal amount to keep you going. You can skimp on food to a certain extent, but water isn’t an area where you can really do that.

Prepare in advance and follow safety precautions after a disaster!

As we all know, the best way to avoid being caught without what you need is to be prepared well in advance so that you don’t have to beat the neighbors to a limited water supply.