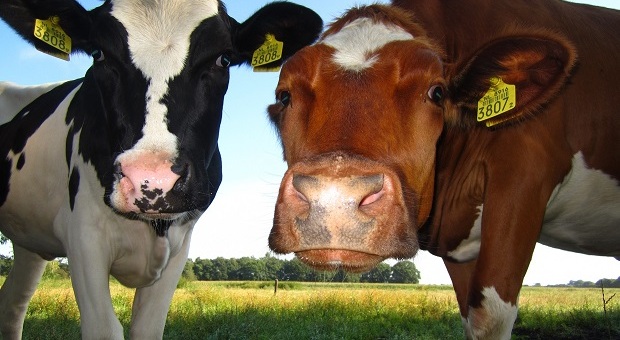 How To Slaughter And Skin A Cow

There’s no doubt that having fresh milk is a wonderful thing, and an awesome reason for keeping cows right now. Good meat is currently available cut and ready to toss on the grill or in the oven, so there’s not need to butcher your own cow right now.

But what if SHTF? Will you know how to turn that cow in the pasture into a steak in the freezer? After this post, you will.

Warning: Before reading this, you need to know that it’s a bit gory. You are, after all, taking a life animal’s life, disemboweling it, then removing its skin and cutting it into edible chunks. If reading that sentence makes you gag, you may want to stop reading because it’s going to get even more graphic from here on out.

Are you still with me? Good. Since I was raised on a farm, the circle of life is a natural thing to me. Animals are bred and born to provide us with some source of food. Eggs, milk, cheese, and meat.

Though butchering has never been one of my favorite parts of farming, it’s necessary and natural. The key is to do it humanely and properly so that the animal doesn’t suffer and the meat doesn’t go bad and make the death a waste.

We always had a firm policy on the farm for hunting and butchering; there were only three reasons to kill an animal: to eat it, to put it out of its misery, or as a last resort to protect life and limb. That’s it. Now, that being said, let’s get down to the business of butchering, and see what steps to follow.

Now, there’s not always going to be this option, but ideally, you want to butcher when it’s cold but close enough to spring that you’re not going to have a 2-month-long freeze. This is because you’re going to hang the meat (more on this later) for at least a day or two and you don’t want heat or bugs to become an issue.

You’re going to need a loaded gun, rubber gloves and extremely sharp knives. A small butcher knife will do for now. A hay hook will come in handy, too.

You need to bring the cow to an area that’s clean and drains well. You also want the area to be accessible by backhoe or equipment that can at least lift the cow high enough for it to be fairly vertical. Finally, you’ll have to get the carcass out of the area, so pick a spot that meets all of those needs.

Bring the cow to the killing area. You want to kill it with one shot, humanely. To do that, mentally draw a line from the base of each ear to the inside corner of the opposite eye. Where the lines intersect is the kill spot.

Shoot the cow from a few feet away on that spot. If you’re not a competent shot or if you’re not comfortable doing this, ask somebody who possesses both qualities to do it for you. Now is no time for a shaky hand – you want to do the job with one shot. 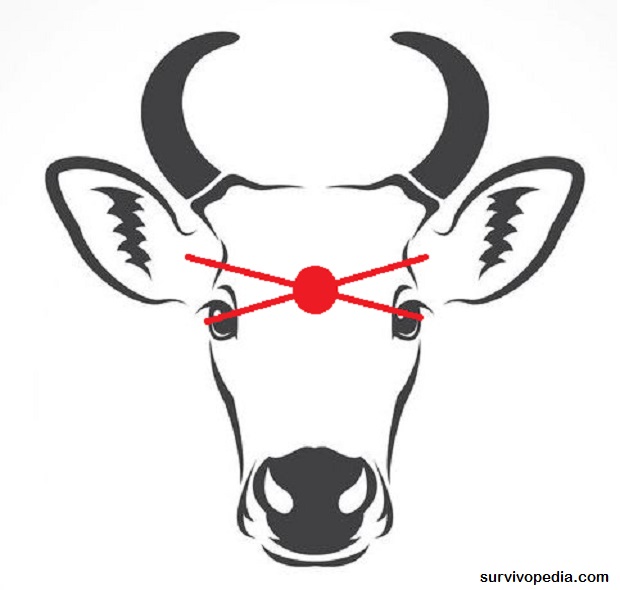 Any gun from a .22 caliber and up will do. As soon as the cow drops, pull its head up to expose its throat. Slit its throat right behind its jaw clear through the carotid artery. At this point, the cow is brain dead but its heart may still be beating a bit, which will help pump all of the blood out of the body. This will make for a much cleaner slaughter in the following steps.

A cow has A LOT of blood, so it will likely take a half hour or so for it to bleed out. There may be some thrashing in the beginning, but as long as you shot it properly, it’s brain dead and not suffering.

This part is where things start to get a bit messy. We always “bunged” the cow – cut around the anus and tie off the end of the intestine so that fecal matter doesn’t get into the cavity and contaminate the meat.

Now roll the cow over on its back and make an incision from the sternum to the anus. Make this incision as shallow as possible; you only want to cut through the  thin stomach muscles, not into the guts.

Hopefully you have help; if so, have them hook the hay hook through the stomach hide and muscles on the top side, if the cow has rolled onto its side, or on the far side away from you. Have them pull the skin and muscle back so that you have access to the innards. If you’re going to be using the heart, liver or other organs, now is the time to get them.

You can start rolling them out from the front back now but you don’t have to get them completely out because you’re going to be lifting the cow in a minute and gravity will pull the rest of them out.

Next, make a slice between the bone and the tendon of each of the cow’s rear legs, right above the joint that holds the hoof. Be careful not to slice through the tendon because you’re going to need its strength to hang the cow. Slide a sturdy piece of wood or pipe through the slits and attach the ends to a hoisting line, which you’ll attach to your come-along.

Now of course if you don’t have equipment, this next step is going to be hard work because you’re going to manually toss the line over a limb, or through the rings on a tripod, and hoist the cow up so that it’s hanging. You can also use a manual come-along.

If you have the equipment, you can attach the end of the line to your come-along and pull the cow over an extremely sturdy tree limb (it’s going to be holding a cow!) or you can use a large tripod made for this.

Be aware, because once the cow starts lifting, the rest of the innards are going to flop out and if you’re in the line of fire, you’re going to need a shower!

When you have the cow hung, it’s time to start skinning it.

If you’re going to be using the hide (of course you are!), you need to skin it carefully so that you don’t puncture the hide. Make cuts all the way around the rear legs just above (well, below, now) the hock. Make a cut that goes through the hide but not into the meat down the inside of the leg to the cut that you made for the anus. Cut off the tail at the base.

Using an EXTREMELY sharp skinning knife, start separating the hide from the meat, starting at the cuts that you made on the rear legs. You’ll notice that the skin starts to kind of peel off – use that space to continue skinning. Work your way around the cow so that the hide is coming off evenly all the way around it.

Cut up the inside of the front legs to the incision that you made when gutting the cow. Next, complete the cut from the sternum to the cut that you just made around the neck. Finish removing the skin.

Now it’s time to take the carcass to the barn or wherever you’re going to hang it. The easiest way to do that is to quarter it, but that’s a story for another article!

There are many different methods to killing, slaughtering, and skinning a cow. The guys from the video below are doing it a little bit different, according to they means and available equipment, but you still got the idea, don’t you?

I know that the content of this article is a bit sensitive but having fresh, nutrient-rich meat for your family will make it all worth it. If you don’t want to do it now, that’s fine, but if SHTF, it’s a skill that will come in handy.

I may have left something out because the process is so familiar to me. But if you have any comments or alternate methods to share, please do so in the comments section below!