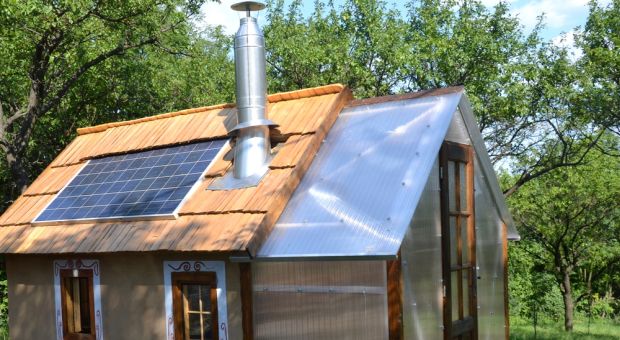 How To Save More Money When Living Off-Grid

Many of us aspire to an off-grid lifestyle, if not in practice, then at least in our dreams.

The idea of breaking free from the electric company, the water company, the gas company and all the others who expect a piece of the pie every month is supremely attractive. But more than that, there’s the idea of being self-sufficient and free; living as Americans did in times past.

I can’t claim to be anywhere near self-sufficient or off-grid, as much as I’d like to be. But I’m gradually working my way in that direction, with the idea of getting there one day. Bit by bit I’m building more solar panels, increasing the amount of power I’m getting off wind power, growing my own food and doing whatever else I can to turn my suburban home into something that at least resembles a homestead, even if it will never be.

Part of my goal in all this is to make my family self-sufficient, in the case of an emergency. If the electrical grid goes down or some other serious disaster occurs, I don’t want to be amongst the people who are sitting there, sucking their thumbs and waiting for the government to get their act together. Like everyone else who is a prepper, I feel the necessity to take care of my own.

But there’s another part of this, which is just as important to me. It’s something I had in mind even before I bought my home. That’s retirement. I’m not getting any younger and the way things are going right now, there’s no way that I will have my mortgage paid off before I reach retirement age. So, I either don’t retire, I sell my home and move into something cheaper or I find a way to live where I am for less money.

Like I said, I started thinking about this before I bought my home. It’s a large home, because my kids were still living with us when we bought it. While they’ve all moved off since then, we still intend to keep it, having a place that they can come back to, if the need ever arises.

A large part of my plan to reduce costs is to try and apply living off-grid to my daily lifestyle as much as possible. With that in mind, there are a number of projects I’ve done or am in the process of doing. The idea is that together they will reduce my cost of living to the point where I can semi-retire in place, living off of what I can earn working part-time.

The Truth and Fallacy of Solar Panel Deals

One of the things I’ve looked into, as part of this plan, is converting my home to solar power. At first I talked to solar contractors – you probably know the kind; they advertise how you can get solar for free. It sounded like something to look into, so I did.

The way this works is that they contract to install a solar power system on your home, based upon your average usage. The idea is that during the parts of the year where you have above average electrical usage (the summer) you buy the extra electricity you need from the electric company. During the parts of the year where you produce too much electricity (the winter) you sell the extra to them. If everything works out the way it is supposed to, you only pay the electric company an average of $20 per month.

That’s the theory at least. But there are a couple of fallacies to that theory; fallacies, I might add, which won’t show up until after you have signed the contract and are stuck making the payments for your not really off-grid solar power system. Let me list a few for you:

There are a few other points I could make, but I’ll quit there. Those are the principal points. So, for what would have cost me $60,000, plus interest, I would not have had a true off-grid system, but merely something that would produce electricity. How much it actually would produce would have to be seen.

The solution to this is to build your own off-grid power system. That’s what I’ve been working on. My system combines wind and solar power and includes a growing battery backup system. It is not intended to provide all the power I currently use; but rather to provide enough to meet our needs in an emergency situation.

By building your own solar panels and installing them yourself, you can save about 50 percent over a solar contractor’s price. In addition, you can install them for maximum efficiency. This means making provision to change the angle of the panels with the seasons, so that they are pointed directly at the sun’s track. That boils down to about a 20 degree change in their angle, four times per year. But it does not mean installing solar trackers so that they follow the sun across the sky every day.

Ultimately, my goal is to be able to produce one-fourth of my home’s peak electrical needs. That may not seem like much, but saving that much off of my monthly electrical bill works out to a sizeable savings every year. But that’s not my only project to save me money.

I don’t care how much electricity you are producing, it’s not saving you a dime if you’re not using it. Contractor installed systems are usually tied directly into your home’s grid, so that you use the power they produce. If you don’t do that with your system, then you’re not going to save a thing.

This can be accomplished by tying the output of your system’s voltage inverter directly into your home’s breaker panel. But there’s another way you can use the power as well. Solar panels and wind turbines normally produce 12 volt DC power. If you use devices which run off of that power, you can tie them directly into your battery backup system, avoiding any energy loss through the inversion process.

A couple of ways I do this is with lighting and charging. I have a secondary lighting system installed in parts of my home. This is a 12 volt DC system, using LED lights of the kind that are installed in recreational vehicles. While not as bright as the CFL bulbs that are in most of the light fixtures, it does provide enough light for a lot of activities, allowing me to save money and only use the CFL lights when I need exceptionally bright lights.

Producing your own electricity isn’t the only way to save on your monthly energy bill. The prime electrical consumers in your home are:

I’ve already mentioned how I’m saving on my lighting costs by using a secondary LED lighting system. I also have LED lights installed in the light fixtures for the parts of the house which don’t have that system. By making this investment, I’ve cut my electrical consumption for lighting down considerably.

Another area I’m working on cutting considerably is hot water heating. Rather than continuing to use the electric heater that the home came with, my plan is to replace it with a homemade solar hot water heater, using the existing hot water heater as a tank for storing the heated water. I’m still experimenting with making an efficient solar collector, but when I have it done a small circulating pump will move the water between the hot water heater and the tank. As a backup, I will have a temperature sensor on the system, to turn on the electric heat if necessary.

We’ve already cut out a lot of our energy cost for the washer and dryer by going back to the old-fashioned idea of using a clothes line. Three-quarters of the energy usage of a washer and dryer is for the dryer, so we’ve made a major savings there.

Finally, we’ve moved a lot of our cooking onto a built-in wood grille on our back patio, rather than using the electric range inside the home. There are two reasons for this; one is to save electricity and the other is to avoid heating up our home. Living in a hot part of the country, it’s important to avoid generating any extra heat inside the home.

Not Just Electricity, Water Too

Going off grid isn’t just about reducing your electrical power consumption, even though that’s the first thing any of us think of. It’s also about reducing your need for anything that you get from our current infrastructure and supply chain. With that in mind, anything from baking your own bread to harvesting your own water is included in going off-grid. Again, all of these things will save you money.

One of the bigger problems with going off-grid is cutting of the city’s water. There are a couple of reasons for this. One is that the city has a monopoly on water and they need people buying water from them, to pay for the costs of running the system. The other is that your water bill covers more than water; it covers sewer and often the garbage pick-up as well.

The solution is to not cut yourself off from the city’s water system. Rather, go ahead and put in your own water harvesting system, whether that is rainwater capture or a well, but still use some water from the municipal water authority. They won’t have any reason to complain then.

Of course, in doing this, you need to ensure that you don’t connect your water system to the city’s water system; otherwise, you could end up in serious trouble. The way I’ve handled it is to use the city water for my kitchen, while using my well for gardening and some of the bathrooms. I have it set up so that in an emergency I can easily switch over to running everything off my well; but right now the two are separate.

Another thing I’m doing is using my grey water for watering my garden and my trees. The water from my bathtubs and washing machine is all going to the garden. I’ve been doing this for a few years now and it hasn’t had any negative effect on either my vegetables or the fruit from my trees.

Finally, my home has a septic tank, so I don’t have to pay the city for sewer service. While that might change soon, as they are planning on running sewer lines down my street, I hope to keep my septic tank, especially since I had to redo the leach fields last year. If they insist that I switch over, I’ll be installing a valve, so that I can switch back to my tank in the case of an emergency.