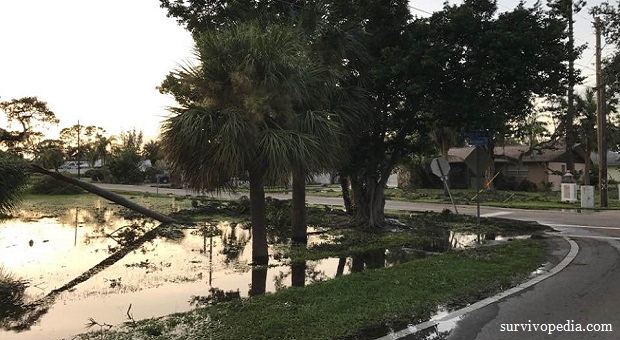 The recent one-two punch of Hurricanes Harvey and Irma have left the country reeling, as any such event does.

But this time, it wasn’t just one such event that struck the country, but two, with a mere eight days between the end of one and landfall of the next. Never before in our nation’s history, has there been so much destruction wrought in such a short amount of time.

In the past, natural disasters of this magnitude have become watershed moments for various presidents.

When Hurricane Katrina nailed New Orleans and the Gulf Coast in 2005, President Bush was lambasted thoroughly in the press for the poor response. Granted, not all of that poor response was his fault or even his administrations. But it happened on his watch, so he got the blame.

Specifically, Bush was blamed because it took three days for any government response to arrive in New Orleans. That’s enough time for people to start dying from the lack of adequate shelter and clean drinking water. Part of that delay was caused by the difficulty of getting through the deadfall trees on the highways, but the biggest part was that FEMA couldn’t move, until the state Governor declared a state of emergency.

The poor press generated by Hurricane Katrina stuck with President Bush until the end of his presidency. It’s even been said that the bad press that Bush received from Hurricane Katrina had a part in President Obama winning the election in November of 2008, as McCain was tainted by simply being in the same political party as Bush.

Seven years after Katrina, Superstorm Sandy, the conflux of two hurricanes, struck the New Jersey seashore, once again destroying homes and leaving people without the basic necessities of life. As with Katriana, FEMA was slow getting their act together; but this time, it couldn’t be blamed on the state’s governor. Rather, it simply demonstrated how inefficient FMEA is.

There are many examples of this, most notably the fact that they didn’t put out requests for bids until two days after the hurricane hit the coast. Considering that the National Hurricane Center had been tracking the storm since it formed off the West-African coast, that was inexcusable.

But the media hushed that up. In fact, President Obama didn’t receive any bad press in the national media.

However, that’s not to say that Hurricane Sandy had no affect on Obama’s presidency; it did. In fact, it had a huge affect. Days before the hurricane hit, Obama was running severely behind in the polls.

But Hurricane Sandy changed all that. Hitting just over a week before the elections, it allowed Obama to look good, as he authorized relief efforts and financial aid to the victims, as well as visiting the area to show his support and concern.

But in one case, the sitting president came out smelling like a rose and in the other, like he had fallen in a septic tank.

What Was the Difference?

The difference was how the media handled the event.

Hurricanes are a big visual event for the media, with lots of good footage and pictures of flooding, general destruction, families in refugee centers and relief workers. People all over the nation are concerned and interested, so they can count on lots of viewers tuning in to see their “exclusive coverage.”

As such, it’s a major opportunity for politicians to make political hay. They get to stand in front of the cameras, talking about how bad it is, how much they support the victims and how much they are personally doing to get those people help.

Spending authorization bills get lots of “pork” projects attached to them, because nobody would dare vote against relief for the victims. For politicians with the right media connections, disasters are a great opportunity all around, too bad about those people who got hurt and lost their homes.

Since the media hated Bush, both for being a Republican and personally, they did everything they could to make him look bad in the aftermath of Hurricane Katrina. But Obama was their fair-haired boy and he could do no wrong in their eyes.

So, as they did throughout his presidency and even during the campaign, they simply ignored anything that might make him look bad, refusing to report it. That left them with lots of good shots of President Obama looking concerned.

Since reality in the 21st Century is defined by televisions, computer monitors and handheld devices, all that most people know, is what the media tells them. This gives the media a huge amount of influence over society, influence that they use for the political benefit of their masters.

With the mainstream media totally sold out to the progressive-liberal left, what the low-information voters are receiving is political propaganda, not anything that even resembles the truth. Fake news has taken over, and the purveyors of that fake news have an agenda that they are trying to fulfill. It doesn’t matter how much they loudly and publically proclaim their innocence and lack of bias, it’s all a lie.

So, How Does this Affect Trump?

Enter President Donald Trump, a true enemy of the media. Trump’s war with the mainstream media has become famous, with neither side backing down. The mainstream media had thrown all their weight behind Hillary Clinton in the presidential race and they lost. Like the rest of those on the left, they don’t know how to handle that, so they’ve doubled down, attacking Trump at every turn.

When Donald Trump and his wife went to Houston, to see the damage and relief efforts for themselves, the media freaked out about the First Lady’s high heel shoes, accusing her of being “out of touch” with the victims, by wearing high heels to go to a flooded region of the country. Of course, they didn’t say anything when she got off of Air Force One, wearing a sensible pair of sneakers. Oops.

You would think that even the media would learn from a mistake like that, but they didn’t.

A few days later, when the Trumps went back to Houston again, we were treated to an instant replay, as the mainstream media once again started a Twitter firestorm about Melania getting on board Air Force One in heels. As with the first time, there was nothing that even vaguely resembled a retraction or apology when she once again got off the airplane in tennies.

That’s it. That’s the coverage that the media gave Donald Trump from Hurricane Harvey. There was nothing about FEMA and their relief efforts. Nothing about Trump’s request for billions in relief funds. There wasn’t even any photos about Trump and his wife helping out at a relief center.

Not even a word about Trump giving one million dollars of his own money to help Hurricane Harvey victims. Rather, they pushed a photo showing Obama feeding the hungry in a shelter, claiming that it was hurricane relief, when it wasn’t.

Such is the objectivity of the media today. Their whole purpose is to make Democrats look good and Republicans look bad. To do so, they hide any good news about Republicans and hide any bad news about Democrats.

Of course, they’re talking into an echo chamber, repeating the same things over and over again; telling their audience how bad Republicans are. But who is that audience? The low-information voters who don’t bother researching anything for themselves and merely repeat whatever Democrat talking points the media tells them to believe.

They apparently haven’t learned yet. Bashing Republicans isn’t going to win them any elections. The Democrat Party doesn’t even have a message anymore. Their supposed “message” is to talk about how bad they think Trump is, based purely on the name calling they’ve been doing. As if name calling is any sort of evidence. Yet apparently they think it is.

But it Doesn’t Stop There!

It’s bad enough to have the mainstream media giving a false narrative and convincing the low-information voters that Trump and the Republican party are bad. But that’s just the foundation level of what they’re doing.

From there it gets even more interesting. Conspiracy theories don’t just exist in the far right of the political spectrum, the far left has their own collection of conspiracy theorists at work.

According to this group of pseudo-scientists and pseudo-political theorists, Hurricanes Harvey and Irma are Donald Trump’s fault. Yes folks, our president apparently hates the American people so much, that he’s intentionally trying to ruin their lives and even kill them. He is doing this by hand-crafting hurricanes out of thin air.

One theory holds that Donald Trump ordered cloud seeding to create the hurricanes, using some ultra-secret magic dust, that they can sprinkle in clouds, causing any sort of natural disaster they want.

Cloud seeding does apparently exist, and it’s been done to cause rain during a drought. But there’s a huge difference between causing a little rain to fall on some farmlands, and creating a storm that’s 400 miles across and has winds in excess of 150 miles per hour.

Then there’s the theory of hurricanes being caused by global warming, or “climate change” as it’s called now. The global warming narrative has been debunked so many times now, that it’s not even funny. Yet there are still lots of people who stick to that story, saying that the rest of us are criminal for not accepting “settled science.” Settled? It’s only settled in their warped minds.

Once again, we can go back to the Mayans to disprove that pseudo-science. If global warming caused hurricanes, how could there have been hurricanes in Mesoamerica over 1,000 years ago? How could those hurricanes have continued to exist through the mini ice-age?

Yet the global warming crowd is trying to blame Trump for these hurricanes; not for anything he’s done, which created more warming; but rather for pulling the US out of the Paris accord. Apparently, pulling out of an agreement that wasn’t going to make any discernible difference anyway is enough to cause hurricanes to start attacking our country. I never knew nature could read.

The cause of hurricanes is known. While we are powerless to do anything to stop it, we can see from the recent hurricane activity that the National Hurricane Center is good at predicting the actions of these hurricanes and warning people of what is to come.

No matter how much pseudo-science they invent to try and pin them on Donald Trump, it’s not going to work. The only people who will believe them are those that already hate Trump and are looking for whatever excuse they can find to talk about how bad he is.

Whatever they do and say on politics, you need to be prepared and expect the worse!