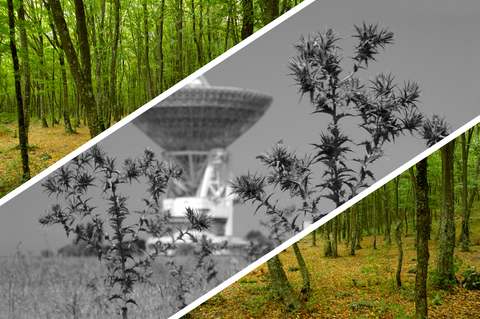 Life in the Wild: Find Your Way Using Nature

Before the GPS there was the compass.  Before the compass was cartography.  But even before man had maps and navigational aids, he was using nature to navigate.  The Greeks, Vikings, Polynesians, and other exploring cultures of centuries past used natural clues provided by the sun, moon, stars, wind, plants, and animals to plot their routes and conquer unexplored territories.

This practice is known as natural navigation, or the ability to use nature’s clues for direction and navigation without the assistance of modern instruments.

Though modern times rarely warrant the need for such skills, taking the time to learn some of the basics could determine whether or not you make it out alive and survive when SHTF.

Let’s take a look at a few basic methods of natural navigation, that will help you identify a general direction of N, S, E, or W. More specific direction will require familiarity with your territory and/or access to a navigational aid.

One of the most basic methods of natural navigation is the use of steering marks to assist in keeping your course.  Steering marks are any well-defined objects in your intended direction of travel.

During the day these could be large trees, mountains, or noticeable shapes on the horizon. 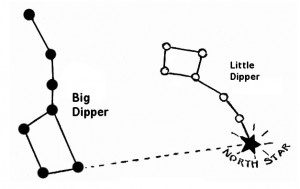 At night the only source of steering marks are the stars in the sky.

Polaris is the most important star to identify, as it remains fixed in the sky less than 1-degree off true North while all other stars change location with the rotation of the earth.

Without the aid of a compass you can use steering marks to detour around an obstacle and reroute your course.

You must find two distinct features (steering marks) on either side of the obstacle, be it a river, gorge, or thicket.  Ideally, one of these marks will be in the direction of your destination.

With one steering mark behind you and the other directly in front, you walk around your obstacle until you come to a point where you will again be between the two marks. Then, continue toward the second mark (and your destination) with the first mark to your back.

Finding North with the Sun and a Stick

When the sun is present and visible, you can use it in conjunction with shadows to determine cardinal direction.  All you’ll need is a stick, some stones, a flat surface, and a few hours of time.

You can draw a line between the two stones to mark an East-West line followed by an intersecting line to denote North and South.This same method can be done with the shadow of a tree trunk in lieu of a stick.  A walking stick, tent post, or other manmade object could also be used.

Direction from Trees and Plants 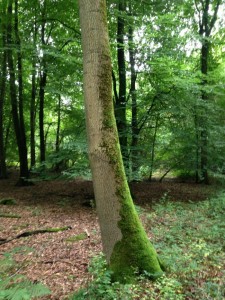 The sun has a different affect on the normal profile and silhouette of each species of tree that can be used to help establish a North-South direction.

Accordingly, if you can identify the direction the wind is blowing, you can use its affect on windswept trees and plants to identify points of cardinal direction.

In temperate areas in both the northern and southern hemispheres, the prevailing wind usually blows from the West.  Wind has the tendency to deter the growth of a tree or shrub by damaging branches and leaves on the windward facing side.

If the foliage along your route shows continual signs of wind damage, you can use these natural clues from the dominant wind to identify direction.  You can use the wind (blowing from the West) to find direction by keeping it to one side of your body and moving in a straight line (toward North or South).

Be aware of any changes in the temperature, humidity, or strength of the wind, as these could indicate shifts in direction.

Though the wind tends to cause damage to the growth of trees, the sun usually helps branches and leaves grow.

In the northern hemisphere, where the arc of the sun falls on the South side of trees, trees show more growth on their southernmost sides.  This tendency depends on the species but is found on most poplar, beech, oak, chestnut, and locust trees, which also tend to lean toward the South over time. The branches on these trees are also more horizontal on the southern side, where those on the northern side stretch vertically as if they are reaching for sunlight.

These same clues also apply to ferns, shrubs, and wildflowers, which also grow more densely and show a slight declination to the South.

Most people have heard that moss grows on the North side of trees.  This is also directly affected by the southern-indicating principles above. Since moss likes shade, it tends to grow on the side of trees (or rocks) that receive the least sunlight, the northern side.

But more than shade, moss and lichens thrive in areas with low levels of evaporation that retain moisture for longer periods of time, which also tend to be on the northern/northeastern side of trees and rocks. 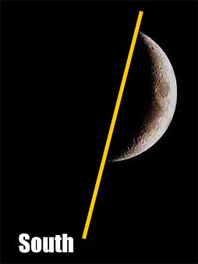 When the moon is in a crescent phase, an imaginary line can be drawn through the points of the crescent down to the horizon.  Though not precise, this point on the horizon will roughly mark South in the northern hemisphere and North in the southern hemisphere.

In a wilderness or disaster survival situation, remaining lost is a death sentence.  Though a map, compass, and GPS should be part of any survival kit or bug out bag, these tools are not always around or in working order when you need them most.

The methods listed above are just some basics to get you started using nature’s clues to find direction.  Taking the time to learn and practice these and more advanced navigational skills could prove invaluable in a true survival situation.