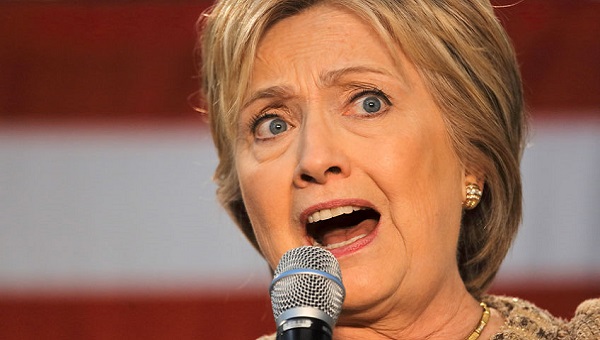 Social media has been alive and buzzing lately, with stories and speculation about Hillary’s health. Her coughing while on stage, coupled with the problems she had at the 9-11 memorial have led many to think that her health is much less than prime, with a strong chance that she has some serious problems going on.

The report of pneumonia just doesn’t ring true with a lot of people. Not only did the report come out late, after the speculation started, but the symptoms visible on the video footage don’t match up with a case of pneumonia. Some doctors are saying that they believe she has Parkinson’s Disease, based on that footage.

Whatever her medical condition is, does Hillary’s health really matter?

Of course, since Hillary has followed in Obama’s footsteps, as far as honesty and transparency is concerned, any report that comes out of her campaign is going to be suspect, let alone one that could shed a negative light on her health.

These days, only 11% of Americans feel that Hillary is honest, compared to 14% of Americans believing in Bigfoot. That’s not a great statistic for any politician to boast about. You can easily see which of the two is more believable.

Considering Hillary’s age, it’s really not all that surprising that she has health issues. I’m considerably younger than her and I have to take medication for high blood pressure and other things. Were it not for the elections, nobody would be paying attention to her health at all. But because of the elections, many people are acting as if her health is a critical issue that needs to be settled before November.

But the question I want to look at is whether this really matters or not. On the surface, the health of a presidential candidate seems like a big deal. But I have to wonder in this case, if it really is. I mean, what would it mean to the country as a whole, if Hillary Clinton’s health prevented her from fulfilling the office of president, assuming she wins the election?

While there are three different versions of this scenario, they’re all the same thing, legally speaking. The only difference is one of timing.

First of all, there are several different versions of her not being able to fulfill the office, which need to be considered.

But in reality, while there are three different versions of this scenario, they’re all the same thing, legally speaking. The only difference is one of timing.

According to the Constitution, when the President can’t fulfill the duties of his office, the responsibility passes to the Vice President. It really doesn’t matter at what point in the cycle that happens; once they are “president elect” that provision of the Constitution kicks in.

What that means, is that at any point after winning the election that Hillary is unable to be president, her Vice President would be sworn in as president. Should she not be willing to leave office, the Vice President could convene the Cabinet to determine if she should be relieved of duty.

With that in mind, it might be a good idea to take a much closer look at her running mate, Tim Kaine. Not a lot has been said about him in this election, but should Hillary win the election, there’s a good chance that he would become President at some point in time.

So what difference would that make?

To be honest with you, I really don’t know much about Tim Kaine, other than that he’s a died blue Democrat.

But his stance on a few key issues has been brought forth, showing that he’s another Democrat politician, made in the same mold as Hillary Clinton and Barack Obama. Specifically, his stance is the same on some of the key issues of this election: illegal immigration, big government and the need to “update” the Constitution.

Of course, that shouldn’t be all that surprising, considering that Hillary selected him as running mate. After all, why would any politician select someone to be their running mate, who didn’t see eye to eye with them. But that’s got to be even stronger in the Democrat Party, who demand that everyone walk in lockstep.

So I would have to say that should Hillary’s sickness keep her from fulfilling the office of President of the United States, then her replacement by Kaine won’t make a lick of difference. We’ll still have a White House that is out of control, doing things by executive fiat, lying to the American people and putting the needs of Syrian refugees, before those of American citizens.

The Question is, Who the Leader Is

The country needs leadership which can put it back on course, returning to the precepts which the Founding Fathers used in establishing it. That’s not going to come from any Democrat candidate, no matter who it is.

Rather, they compete between themselves for the title of being the one who pushes us the farthest away from those precepts. So no matter which Democrat candidate wins, assuming they do, mainstream America loses about the same.

The big difference would be if something happened to Hillary before the elections. In that case, the Democrat Party would have to put forth another candidate. This might be Kaine, but would more likely by Joe Biden, even though he’s publicly stated that he doesn’t want to be president.

Leadership in the Democrat Party has reportedly been looking at that possibility, even to the point of replacing Hillary regardless of her desires. That shows just how concerned they are about it, as Hillary has was the presumptive candidate long before the primaries began.

By all rights, one would think that the nomination would go to Bernie Sanders, who was a close number two in the primaries, but that’s not how things work. According to the rules of the Democrat Party, in the event that the candidate has to be changed, the leadership of the party makes that decision. A full convention doesn’t have to be called, and it doesn’t automatically go to the person who won the second most delegates.

But with less than two months left until the general election, making a change of this magnitude is a risky move. The new candidate would have very little time to build their image and connect with the voters, lowering their chances of winning the election.

That’s probably what’s staying their hand in making such a decision, because no matter how bad things get, the Democrat Party wants to win this election. They want to retain power and that means beating the Republican candidate no matter what.

So Hillary will probably stay in the running as long as she possibly can. That’s risky too, as it appears that her health is waning rapidly. But apparently in the eyes of the Democrat decision makers, that’s not as big a risk as replacing her is.

We’ve got to remember that Hillary is a “historic candidate,” just as Obama was. Part of what won Obama the election was that he was the first black president. Hillary would be the first female president. The same types of people who voted for Obama, just because he was a black, might vote for Hillary, because she’s a woman. On top of that, a lot of pressure has been put on women in general to vote for her, under the guise that a vote for Hillary is a vote for women’s rights.

Neither Kaine or Biden would have that card to play in the elections. So, not only would they lose votes because of floating a new candidate that hadn’t connected with the public, but they’d also lose those voters who were only voting for Hillary because she is a woman.

There’s a good chance that many of them would move over to the Trump camp, simply because he’s an anti-establishment candidate, running on a populist platform.

Either way, the alternative media is right in talking about Hillary’s health and we need to be keeping an eye on it. As long as she’s a candidate, that’s something that should be of vital interest to every voting American. Hiding the truth and not being transparent about her health issues isn’t doing her campaign any good.

If anything, her lack of transparency is harming her campaign, as it is showing that she can’t be trusted. It’s also raising a lot of questions about her ability to fulfill the office of president, should she be elected.

Supposedly voters are moving away from her in droves, which can do nothing but help out the position of Donald Trump in November’s elections.