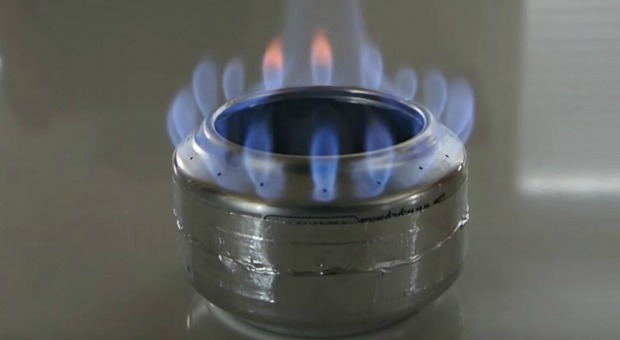 If you’re an outdoor enthusiast or just well versed in the fine arts of prepping, I bet you already know about alcohol stoves, either DIY or commercially available ones. The thing is, if you’re looking for the lightest, cheapest and most reliable stove possible, the alcohol stove is the one for you.

There are plenty of companies out there who manufacture and sell alcohol stoves, but the good news is that you can build your own for next to nothing while using basic tools and skills.

There are a few myths and lies out there about DIY alcohol stoves. For example, some say that they don’t really work and they’re not reliable. Yes, they actually do work in real life, just ask old school hikers or your local bum.

A homemade, lightweight and compact alcohol stove makes for the perfect companion while camping, hiking or backpacking solo. Thousands of outdoor enthusiasts have been using them regularly for decades now with zero complaints, so yes, alcohol stoves do work admirably in their niche.

Another myth about alcohol stoves is that they’re not reliable. Very fake news folks. A well-built alcohol stove will last you forever, as it has no moving parts, i.e. it’s that kind of “Russian design”, simple and sturdy. Also there are no filters to get clogged and so on and so forth.

The most common type of DIY project is a soda-can alcohol stove; the point is, even if it “breaks”, you can build another one on the spot with readily available materials (back to that in a jiffy), so the reliability issue is pure nonsense.

Some say that alcohol stoves are dangerous. Again, very fake news, considering that playing with fire is always dangerous, hence in that regard all stoves are “dangerous” if you’re not paying attention.

The problem with alcohol stoves is that if you knock them over while cooking, the fuel inside can easily spill.

Just remember a few simple rules while cooking with these bad boys and you’ll be fine: don’t cook on flammable surfaces, keep flammable materials away from your lit stove, always keep a bottle of water nearby when cooking (or a fire extinguisher, whatever), be careful when cooking during the day as the alcohol flame is almost invisible (don’t get burned), avoid cooking in windy weather as it makes controlling the flame difficult, don’t add fuel if your stove is already burning, never cook inside your tent, and avoid using your alcohol stove in enclosed areas which lack proper ventilation (think carbon monoxide poisoning).

Also, never leave the burning stove unattended and, after using it, let it to cool down for 10 minutes before handling  it.

Another thing about DIY alcohol stoves is that they have a bad rep for crushing easily. That’s somewhat true, considering that they’re often built using soda cans, which are basically thin sheets of aluminum.

Even the ones manufactured from (tougher) tin cans can get crushed if you step on them, but that’s a feature, not a bug! I am only kidding; however, the simple solution to the issue is not to step on them. Store them inside a hard sided box/container like your cook pot when you’re not using’em.

Finally, there’s another myth about alcohol stoves not working at high altitudes and/or in low temperatures. I can tell you from firsthand experience that a DIY alcohol stove works just fine at 6,000 feet above sea level, so for all practical purposes, assuming that you’re not climbing Everest using DIY alcohol stoves, you’ll be just fine.

The thing is, given the fact that the oxygen content in the atmosphere decreases with altitude,  an alcohol stove (or any other open-flame type of stove) will not be as efficient at 5000 feet as it is at sea level, but then again, that holds true for any type of fire.

Also, I’ve used soda can stoves in temperatures as low as 15 degrees Fahrenheit and without noticing a degrading in terms of performance. Just to give you a picture about how efficient these babies are, I’ve read that the Finnish and Swedish army uses alcohol stoves all year round, and it gets pretty cold out there in northern Europe (think -10 Fahrenheit winters).

How to DIY an Alcohol Stove

Now with the misconceptions taken care of, let’s concentrate on the DIY part.

Why DIY instead of buying one? Well, first, it’s lots of fun doing things on your own, especially if you’re into prepping. Secondly, you’ll save money in the process and third, you may end up caught in a hairy situation someday with no hardware store around, so you’ll be forced to improvise your own gear.

And yes, a DIY alcohol stove can be improvised with ease almost anywhere in the world, provided you have the fuel available. The simplest alcohol stove can be built using nothing more than 2 empty cans of soda, a nail for puncturing holes, a razor blade, a penny and a thumbtack. Yes indeed, it’s that simple folks.

As per the fuel, you can buy large amounts of (at least 70%) methanol/methyl alcohol/rubbing alcohol at any hardware store for a few pennies.

If you’re the picky type of person, take a look at this alcohol stove comparison and make up your own mind about what type of “design” you want to concentrate on.

The Beverage Can Stove

In the first step, you’ll have to cut the bases of the 2 cans approximately 1.5 inches from the bottoms.

Next, drill the burner holes in the top can, including the fuel drainage hole, then there’s the cutting of the top can. The base of the bottom should be filled with a material that will soak up the alcohol (acts like a wick); for example, fine sand or even more fancy stuff, like perlite (a siliceous rock, easy to find at gardening centers).

In the next step, you’ll fit the 2 parts of the stove together; just take a look at the next video tutorial and you’ll see about the fine details.

Just remember to prime the stove before use, i.e. you’ll have to pour a tsp. of fuel in the dimple of the stove (on top) and light it up. In this way, you’ll heat the fuel inside, which will evaporate, and your oven will magically start working.

Here’s another video about how to make a soda can/beer can stove, which compares 2 types of designs.

Here’s a Tornado Wick Jet Alcohol Stove, a fancy DIY project by all means and a more elaborate one, which is more of an exercise in cool design and mad skills.

The Tin Can Stove

An alternative to this relatively flimsy (yet very easy to DIY) beverage can stove is the tin can stove. This baby is not made of aluminum but from tin, which makes it more stable, hence more difficult to knock over.

The problem with this type of DIY alcohol stove is that tin is harder to cut/process than aluminum.

Here’s an idea (this guy doesn’t use tin cans but that’s not the point) and you’ll see what type of tools are required for processing stronger tin.

Here’s an idea for an alcohol stove improvised from a Nivea cream box (made of tin) and it makes for the best of both worlds, i.e. it’s not aluminum made (it’s stronger) and it doesn’t require too much effort to build it (all you have to do is to drill a few holes).

If you have any question or comments, feel free to speak your mind in the dedicated section below. Good luck, have fun!