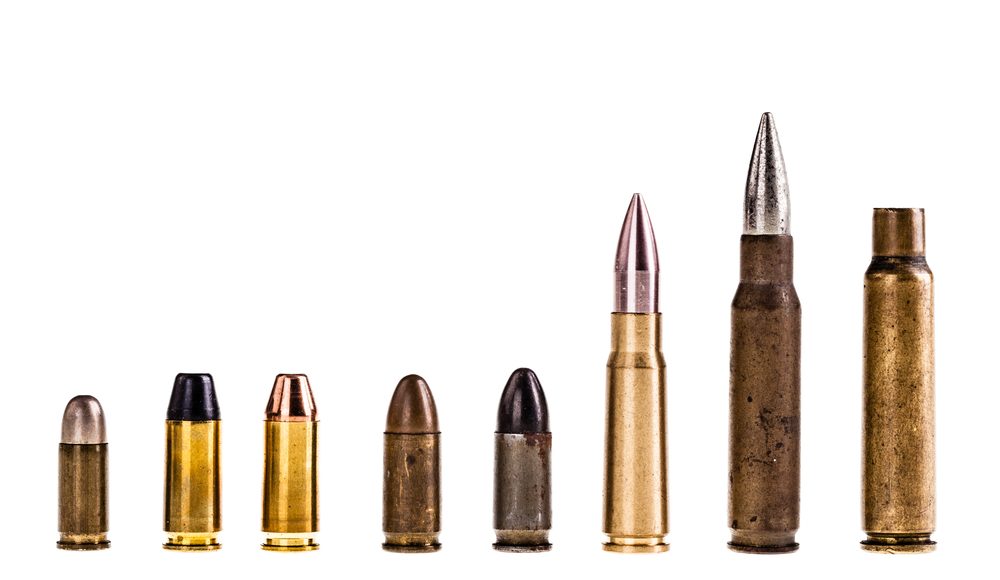 When you’re purchasing your first hunting rifle, you need to consider what caliber will be best for you.

There are a ton of different calibers, but there are some common ones you can learn about to get started.

For hunting varmint and other small animals, the .22 is usually your best bet. The rounds are incredibly cheap. This makes it a great caliber to practice with. You can plink all day without thinking too much about your wallet. They can also be great for teaching new shooters due to the low recoil.

With that said, it is a serious rifle. It offers more than enough stopping power when it comes to hunting small animals. The .22 is quite small though, so its usefulness as a hunting round is a bit limited for other animals.

The Winchester .243 is perfect for animals like deer. It is on the smaller end of calibers used to hunt deer, so it won’t be ideal for larger animals. It also lacks the recoil of most rifle calibers though. 30-06 is another common round. It is one of the oldest rounds still used today. Unlike the 30-30, it is still going strong. It has plenty of stopping power, and its popularity means that there a lot of rifles chambered for it. It can also be used to hunt larger animals like elk.

There are many calibers to choose from, but the ones discussed above should offer a good starting point.

The .308 is also useful for hunting deer. It is fair but larger than the others though. Where the .308 really shines is with slightly tougher animals like hogs. 30-06 is also large enough to take down these beasts. .300 blackout has also become popular as of late because while being a powerful round, many AR platforms are chambered in it. Hog hunters especially have taken a liking to AR-15s chambered in .300 blackout. For the largest of animals, like bison and bears, many will move on to something like the .45-70 govt.

Along with a variety of calibers, there is also a variety in the types of bullets you can purchase.

There are many types of bullets, but most will be either one of these or a hybrid design.

In general terms, hollow points and soft points are great for inflicting the most amount of damage in one shot. Full metal jacket bullets will most likely pass straight through the target. A hollow point or a soft point will damage more of the meat upon impact. On the other hand, a full metal jacket is more likely to not drop an animal immediately. This may result in a hunter having to track a deer through the woods to find where it dropped off at. Many hunters want to avoid this. However, with a small animal, the full metal jacket should still put it down, and there may not be enough meat to destroy with an expanding bullet. These are the sorts of considerations you have to take into account when choosing what type of bullet to purchase. Many hunters prefer to use soft points for deer, as they kind of offer the best of both worlds. For dangerous animals like boar, you may want to use hollow points to ensure that they go down as quickly as possible.

Boat tails are designed to maintain their trajectory over distances. This is great for long-range hunting. You will find many hybrid types of ammunition offer various benefits for range, penetration, damage, and other aspects of shooting.

Another way bullets are differentiated by is loads. This comes down to the powder content of the bullet and can affect performance in a variety of ways. You’ll find a lot of specialty ammo. Many hunters go their lives without taking an interest in specialty loads, but it can be an effective way to tweak the performance you get from your rifles.

You’ll find loads that are aimed at lowering recoil. This will typically lower the speed and impact of a bullet. However, they can be useful for a lot of people. Some shooters may have injuries of some kind that make recoil painful. Children may be able to shoot longer without pain. And, at the end of the day, regardless of the reason some people perform better with a little less recoil. You can find loads meant to increase velocity as well. These may be a bit harsher to shoot.

You’ll also find lead free bullets. These are aimed at environmentally conscious. They are a bit more expensive than lead bullets, but they will prevent toxic chemicals from entering ecosystems. Some states have actually moved to make these bullets mandatory, so shooters in those states will have to bite the bullet on the pricing.

There is also the grain of the bullet to consider. This essentially refers to the amount of powder in the bullet. Every caliber has different ranges of grains. Generally, the higher the grain, the more energy it will carry.

The world of bullets gets deeper the more you look into it, but some basic knowledge will take you a long way.