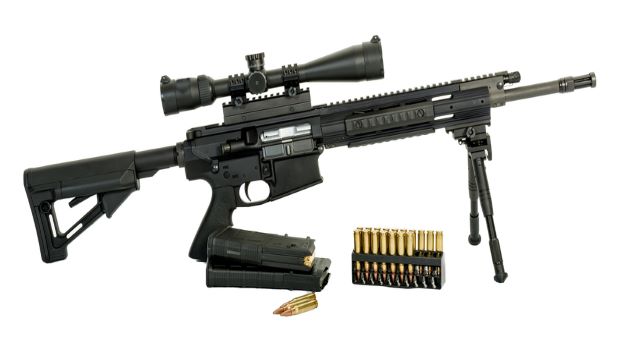 Automatic rifles are, at the same time, a blessing and a curse of modern science.

These are the beasts that can fire a thousand rounds of ammunition per minute and are able to tear apart a human being into pieces within seconds. At the same time, they are an effective measure of deterrence for any law-enforcement agency. The dilemma between the effective use to cause & deter violence is what makes these machines somewhat special.

Rifles are termed as the weapons with selective fire, carbine cartridge, & detachable magazine. Even though there are thousands of variants of rifles, there are very few core models. One such core model is the Armalite AR-10 variant, one of the very first effective rifle variants in the world. AR-10s are still hip & famous in gun-loving communities, especially because it was the predecessor of the AR-15 style rifle. But today, we are going to discuss why you should choose an AR-10 for its own effectiveness.

If we trace the origin, all rifles owe their glory to the German-built STG-44. The first effective machine of its kind saw active combat in World War 2. Americans & Russians were inspired by this design and started developing their own rifle projects. Russians immediately developed the AK-47 after the end of World War 2.

Americans started developing rifles in the 1950s. They wanted to replace the aging M1 Garand semi-automatic variants which were the main armament of the US army in ww2.

As the Europeans were adopting the FN FAL variants, Americans at first decided to go with the M14s which were an improved version of the M1, made to fit .308 NATO standard bullets.

But soon after, the US army decided to drop the M14 for its inefficiency and started looking for a better weapon. Around that time, Eugene Stoner developed an AR-10 rifle for Armalite, and it was proposed to the US military. But they deemed it an impossible task to make it & distribute it within the given timeline.

So a slightly modified version of the AR-10, adjusted for .223 Remington rounds, was rolled out. It was termed AR-15. And this is how the most famous American rifle family of all time- AR-15 came to be.

Although AR-15 models are more popular in the world today, AR-10 is a very effective weapon and certainly was way ahead of its time when it came out.

AR-10 has popularity among those people who want a better range and more permeability. AR-10s have an effective use in the army as moderate to semi-moderate range sniping.

For civilian use, it easily dominates AR-15 when it comes to hunting big games. An AR-10 can kill big games like bison very easily because of its larger bullet size.

As we know, modern weapons feature a long list of attachments. They also vary on different models. Even then, there are some general attachment options you can look into. AR-10s feature a marksman ability for its long-range. You could certainly check out the best scopes for AR 10 to take advantage of this feature. It can also feature red-dot sight for small and intermediate-range.

Mufflers or silencers are a big feature of AR-10. It was one of the first rifles to provide a tactical silencer. The early ‘Hollywood’ models featured a flash suppressor/compensator.

Shoulder stocks are a very important component of any rifle. You can add various types of shoulder stocks in modern AR-10s. But choose the ones with most shock-absorbent capability, because it’d need to compensate for big bullet capacity of AR-10s.

Other than that, it can be fixed with custom grips for your convenience. Early models had the feature of bayonet fixing in the front. In the recent variants, you can fit in a grenade launcher like the avalanche gun.

Perhaps the biggest difference between the two rifles is their ammunition.

The AR-10s were built earlier and featured a bulky design to fit in the 7.62×51 mm NATO rounds or as we called it .308 rounds throughout this article.

This bullet size difference created a visible contrast between the two rifles.

The AR-15, with its lighter bullet, features a lighter design and greater maneuverability. It will weigh an average of 6 pounds without attachments. It has wide availability. It has a better chance of receiving after-purchase service than the other rifle variants.

Whereas the AR-10 with its .308 rounds features a bulkier design. Out of the box, it’ll weigh between 8-10 pounds. It is not as widely available as AR-15.

The above comparison definitely goes in favor of AR-15. So, why are we suggesting the AR-10?

The same reason why it falls behind AR-15 in the above comparison – its ammunition. The 7.62×51 mm round is a big bullet. It has a wider range and better permeability. It can go up to almost 700 meters when shot from an AR-10. The .308 round can virtually tear through anything, starting from- walls, furniture, etc. So in close quarters, house-to-house combat, it can cripple the enemy’s defense very easily.

Whereas the AR-15’s .223 caliber rounds feature a low range, approximately 500 meters. It has a lesser penetration ability than the .308.

We have talked about the non-military application of this rifle, like hunting. AR-10 is definitely a better option here. You can kill smaller games, like- deer or squirrels using an AR-15. But when it comes to bigger animals, like- an elk or bison, you will need the power of the .308 round to bring them down.

Why you should choose AR-10

Obviously, for all the reasons we just talked about. It’s just convenient to have the power of .308 round in your hand. You can use the AR-10 for long-range combat. Moreover, it’ll provide you a better result in a short-range. So, it should be your top choice when you are buying an automatic rifle.

Shawn is a content writer at FeedFond. He’s a doting father not only to his two children but also to his two Golden Retrievers. Check out more of his articles at FeedFond.com.