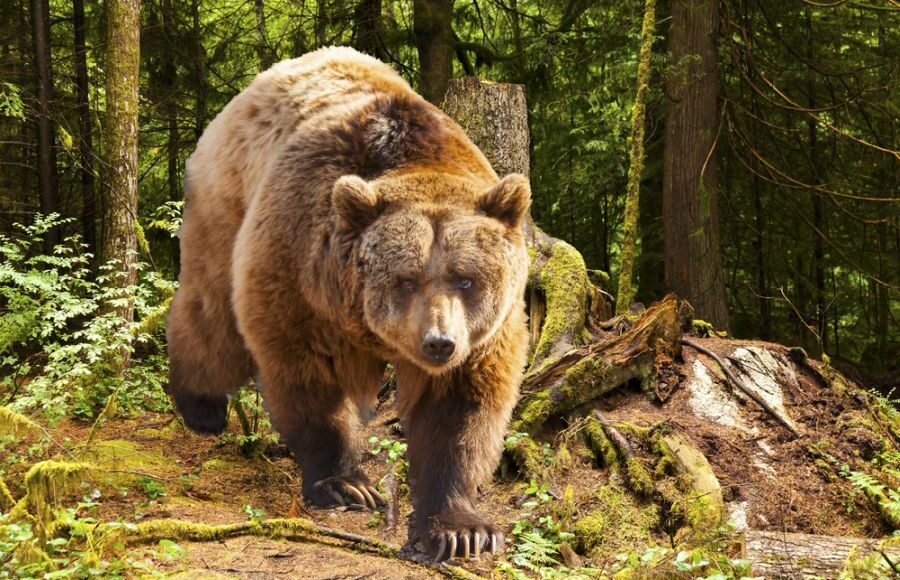 Waking up in the middle of the night and finding a massive bear ransacking your kitchen may seem like a dark-comedy movie script. However, for California’s Lake Tahoe area residents, this became a reality when Hank the tank, a 500-pounds bear, visited them.

Over the last few days, the bear became famous as dozens of news outlets shared his story and its rather abnormal behavior. The bear is responsible for more than two dozen home break-ins in the Tahoe Keys area of South Lake Tahoe. The bear was seen roaming the streets during nighttime but also in plain daylight when people were going on about their usual business, searching for his next easy meal.

What we know so far

According to the latest update from local officials, the bear seems to be responsible for 28 home invasions, and it did extensive damage to 35 properties. However, according to the California Department of Fish and Wildlife (CDFW), it seems that more than 152 reports were filed with Hank the tank pointed as the main culprit.

The CDFW has labeled hank as a “severely food-habituated” animal, and it no longer fears humans and their presence but rather associates them with food or easy access to resources. In such a case, the prime course of action would be to trap the bear and euthanize it since it can be extremely difficult to relocate it.

Hank’s fame increased rather quickly. Eventually, it will lead to its demise since the South Lake Tahoe police are sick of residents calling their department to report seeing the bear or sharing their personal opinions on handling the situation. This led to increased pressure on the CDFW part, and it seems the days of the bear are numbered.

The immense size and strength of the bear helped it break in and through front doors with ease, and not even robust garage doors could stop Hank. It caused widespread panic as the extremely food-habituated bear became more and more fearless and started breaking into homes even when the residents were inside.

As you can imagine, the fear and panic were justified since such a massive bear can easily kill humans if threatened. Even so, the CDFW states that there weren’t any direct bear attacks on humans or their pets in South Lake Tahoe. Instead, they urge people to help them with the tagging process and let the department accurately identify bears in the local area before the next steps are taken.

There’s More to the Story

For quite a few days, Hank had a death sentence hanging over him, and it seemed his fate was sealed. However, things suddenly took an unexpected turn, and it appears that the bear will not be killed nor have his freedom taken away by being sent to a sanctuary.

According to the latest news from CDFW, after collecting and analyzing various DNA samples, it looks that Hank is not the only culprit here. In fact, DNA evidence clearly shows that two other bears are involved in the break-ins and are responsible for the damaged properties.

The CDFW has stated: “Identifying bears simply by their visible, physical characteristics can lead to misidentifying bears and therefore confusing management efforts. “The genetic information gleaned from our effort in the South Lake Tahoe area will assist CDFW by expanding its database of bear genetics and hopefully preventing future misidentification of bears.”

Following this new evidence, the authorities have changed their minds and now plan to trap the bear, tag, and relocate it in an area uninhabited by humans or with a low human presence. Their goal is to keep residents safe, but they do not want to take drastic actions against wildlife unless it is necessary. Instead, they want to move Hank and the other bears to a location where they are provided with safe and healthy living conditions.

What Can Residents Do?

We first have to mention that black bears have quite a different behavior compared to their cousins, the brown bears. A black bear will not attack unless it’s provoked or threatened and does not have predatory instincts towards humans. They will flee when they notice the presence of humans and, in general, they avoid human interaction.

On the other hand, the brown bear can show predatory tendencies towards humans, and they won’t back down from a confrontation. While both species are curious by nature, a brown bear will attack humans regardless of whether it feels threatened or not. They are much more aggressive than black bears, and their size, weight, and strength are no match for a human. They are not tolerant of people like black bears are.

Now, when it comes to protecting their homes and properties, the residents in the Lake Tahoe area should follow a few simple recommendations. In fact, these recommendations should be acknowledged by anyone living in proximity to bears.

Recommendations for dealing with bears:

While it may be difficult to discuss each interaction involving a bear, the main thing you should keep in mind is that you need to keep your distance and stay away from bears, regardless of their species. Under no circumstance should you get closer to it to take a picture for your social media accounts or feed it because it looks “cute.” You will encourage the bear to get closer and examine you, and this may turn into a tragedy.

If you have pets, make sure you are able to handle them properly. Your pets will follow their instincts and defend your family and their territories. They may initially try to scare the bear, and if they see the bear backing down, they will gain confidence and may try to attack it. The situation can change in mere seconds, and you will want to step in and save your pets. This is extremely dangerous as you risk shifting the bear’s attention towards you. Keep your pets inside, and don’t let them provoke the bear.

Do not run away since such action will trigger a predatory response, and the bear may chase you. You cannot outrun a bear no matter how much you try. Well, the situation may be different in the case of Hank since his massive weight might take a toll on his speed and dexterity, but even so, don’t try your luck at who’s faster. You can make yourself appear bigger if the bear heads towards you. Raise your cane, backpack, or any item at your disposal above your head to appear as large as possible.

Do not shoot the bear. First of all, this may be illegal to do, and you will have to deal with the authorities and prove that your life was at stake and your loved ones were in danger. You might get in trouble for killing the bear. And second, there’s a slight chance you will be able to kill it. There are certain factors that come into play here, such as the firearm being used, caliber, and shot placement. There’s a high chance you will only hurt the bear, and if you’re lucky, it may run away. Otherwise, you will turn a situation from bad to worse.

Do whatever you can to scare the bear while keeping a safe distance. Loud sounds usually work, and if you play music, bang pots, and pans, or use any other kind of noise, there’s a big chance the bear will flee. Another option would be to keep a can of bear spray and use it if the bear gets too close. Also, bears will hesitate to attack groups, so if you see a bear on your street and you decide not to stay away from it (for whatever reasons), don’t approach it alone and have someone back you up.

Take all precautions to store food properly, and if bears are known to wander in your area, invest in a bear-proof trash can. There are even videos online teaching you how to make most trash cans bear-resistant. Perhaps some of these ideas work, perhaps they don’t. Also, figure out what other bear deterrents options you have for your area and property. Talk with the Department of Fish and Wildlife from your region and ask for advice.

If a bear was spotted in your area, don’t try to bait and trap it. Let the professionals handle it, leave their traps alone, and not vandalize them. In the case of Hank, there were reports of people interacting with the traps with the sole purpose of giving the bear a chance not to get caught.

A bear attack can do a lot of damage compared to other wildlife attacks on humans. Their claw and bite wounds will cause incredible damage to our human bodies. If a victim is lucky enough to survive, they will need intensive care. Stop the bleeding when providing help and call for help immediately.

Regardless of the bear species, a bite from such a large animal will leave a human with broken bones, a significant loss of tissue, and severe hemorrhage. Not to mention that their claws will tear up flesh easily and cause deep wounds all over your body. The problem with bear attacks is that they almost never apply defensive bites, and they go full in on the attack.

Learn everything you can about the bears in your area and if you are at risk of encountering a black bear, a brown one, or its Grizzly cousin. Bears have different behaviors depending on their species, and you need to learn how to stay safe and how to deal with their behaviors in areas where they live. Also, a severely food-habituated bear (regardless of its species) will not show typical behavior patterns, and they are highly unpredictable animals.

While bears do hunt, they always prefer an easy meal and would rather scavenge and forage rather than chase large prey. Living in proximity to bears is a challenge because their high sense of smell will always lead them to those easy meals in your trash cans or home.

Some people consider bears dangerous and invasive animals, but they were here long before we showed up. We are the ones that build our lives on their habitats, and we must learn to cohabitate with these majestic animals without putting them or ourselves in danger. We should keep our distance and do everything we can to prevent interactions that may have a dangerous outcome.

Far too many times, we’ve seen people online feeding and interacting with wild animals for stupid reasons, and when those animals no longer fear humans and invade our homes and safe spaces, everyone acts surprised and blames the animals. Due to some stupid actions, the animal will have to be put down, and the story keeps repeating itself without anyone learning their lesson.

Stay safe and keep your distance from wildlife!