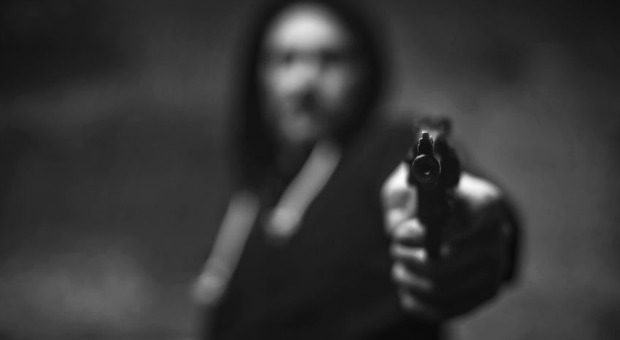 In today’s world, armed robberies and other situations involving guns have become the new normal.

Armed criminals have taken over neighborhoods and rule by terror.

While legislative action aimed at gun control will not stop this, and will more than likely make it worse, there are things you can do when someone points a gun at you.

As dangerous as this situation is, you can turn it in your favor. Read the following article to find out how!

What the Criminal Wants Is…

If an individual is bent on killing you they will probably point the gun at you, then he will pull the trigger immediately, or feed off the fear that you’re generating, and then kill you.

If the criminal decides to pull the trigger immediately, the odds are you will be shot before you have a chance to react. Depending on the shot, you may be injured, but not dead yet. You’ll be dazed, stunned, or otherwise unable to respond with any defensive moves you may have practiced. While it may not seem like much, you must still remain calm and see what you can do for your survival.

Sometimes the shooter wants to feed off your fear or other debilitating emotions first. You should try to negotiate your way out of harm’s way before physically engaging the individual. If you are more than a foot away, try running away in a zig-zagging pattern while looking for cover, and hope they don’t have any formal training in how to shoot. This is a much better option than engaging.

When all is said and done, surviving when someone points a gun at you comes down to a decision to stay and fight or to try and escape. In many cases, trying to escape is your best option. If you are unable to do so, and have nothing left to lose, then you might as well give it all you have and fight as best as you can.

Two Common Mistakes to Avoid and What to Do Instead

Oddly enough, most people are overconfident about their ability to defend themselves. For example, many people think just because they can do household chores and watch a few action movies, they are strong enough and know enough to fake their way through a situation.

These people don’t take into account the very visceral and often debilitating effects that come with realizing that their life is in danger. Without proper training and practicing basic skills, it is very hard to get out of a situation in which someone else intends to hurt you.

Remember, it is overconfidence, sometimes borne of wishful thinking, that usually leads to a vast majority of deaths.

The second most common mistake is made by untrained individuals trying to take on and fight an armed attacker. Sometime you have no choice but to fight for your life, however, as with anything else, you must pick your battles carefully.

The most important thing to do when an individual holds a gun on you is to stay calm. Clarity of thought is very important.

You must establish eye contact with the individual pointing the gun at you because:

While the assailant is holding you at bay, study them. Instead of trying to memorize exact height, weight, or every article of clothing, try to find something unique about them personally. Unless the person is exceptionally tall, short, heavy, skinny, it is not going to do the police much good later when you are question. As far as clothing goes the assailant is going to change their clothing and their looks as soon as they are clear of the crime scene.

When you are memorizing the criminal, you must be able to distinguish them from other individuals on a lineup that are similar to the criminal’s general features. Pay attention to hairstyle, scars or birthmarks, tattoo, piercings, language style, or anything else that is unique to this individual.

Regardless of specific aspects of the situation, you must always follow these three steps as early as possible in the encounter.  Now let’s have a look at some specific scenarios and some suggestions for getting out of them alive.

What to Do if You Are Carrying a Gun Concealed

One of the most important things to remember if you are carrying a concealed weapon is the criminal still thinks they have an advantage. It is best to pretend to be a passive victim until you see a viable window for taking action. Remember, you actually have the element of surprise unless the criminal suspects you are carrying or actually found out via stalking you prior to the encounter.

A concealed weapon carrier must always keep their ego in check! If you don’t there is a strong chance that you could get shot or accidentally shoot an innocent by stander. Never try to draw your weapon in plain view of a criminal unless you have good cover that will stop and incoming bullet. Once you have drawn your weapon, shoot to save your life and the lives of others in the area not involved in committing a crime.

The following YouTube videos will show you wrong and right ways to draw your weapon when a criminal has the advantage over you.

To paraphrase the late, great Col. Jeff Cooper, “Owning a gun doesn’t make you a gunfighter anymore than owning a guitar makes you a musician“. You must know how to use it and, equally important, WHEN to use it.

When trying to shoot and hit a fast moving vehicle departing a crime scene.

There may come a time when you are absolutely sure that an armed individual will pull the trigger and attempt to kill you. Regardless of the shooter’s intentions, you must do everything within your power to to defend yourself.

This may include running for cover, throwing objects at them, poke them in the eye if they’re close enough, or use any form of self-defense that you know of to protect yourself.

These actions are an absolute last resort. You must be ready for the possibility that you may be shot and killed. In this situation, it is better to do something than to do nothing at all.

What About Taking the Gun Away?

Your number one goal in this situation is to save your life. Fighting back greatly increases the odds of losing your life because it increases the risk of getting shot. Quite frankly, it takes a lot of skill and training to pull a gun out of someone’s hand and do it successfully.

If you have never been trained by the police or have not undergone extensive martial arts training, there is a chance you will fail in your efforts. To add insult to injury, even if you do manage to get the gun away from the criminal, that person will try to get it back. This, in turn, means you need to be prepared for an additional struggle.

The safest thing to do when faced with a handgun is to do whatever the individual says. The only exception to this is to get in a vehicle with this armed individual. Remember you are gambling with your life. This is not the movies or TV. The odds are the criminal has more experience in controlling terrified victims and will not think twice about shooting you.

That being said, there are a few tactics you can try. As with any other maneuver, the more training and practice you have, the better chance you will succeed in your efforts. Once you have good muscle memory for these maneuvers, you don’t have to think about what steps to do in which order. The tactics just flow from beginning to the end without you thinking about it.

All of these maneuvers are dangerous if the criminal is stronger than you. They also increase the risk that the criminal will fire the gun and strike you or someone else in the area.

Move your head out of the line of fire. Grab the gun directly from the criminal’s hand. Twist the gun to the right breaking the criminal’s finger as you do it. Remember the criminals finger will be on the trigger.

Take the gun from the criminal’s wounded hand. Use the right hand to stop the wrist as you use the left hand to bend the wrist, grab the gun, and push the gun down. This is very important. If you don’t grab the wrist before twisting the gun down, there is a chance the criminal will maintain control of the gun.

Gun Pointed at Your Back

This video will show you the basics of what to do when a criminal points a pistol at your back. These techniques demonstrate a quick and safe way to disarm a criminal and give you the upper hand.

Gun Pointed to Your Head

Watch this video for a quick and safe disarming of a criminal. The film will demonstrate how to  disarm the criminal using  a single or double handed pistol holding grip.

In conclusion, being held at gun point can be a terrifying and possibly deadly encounter. There are many times when the criminal does not want to shoot, but feels they must point the gun in order to exert control in the situation.

Remaining calm and maintaining eye contact can rob the criminal of some of the psychological reward associated with the situation, and also help you buy some time in which to act. Protect your self by learning some basic self defense moves, as well as when and how to deploy them so that you have a better chance of surviving and coming out of the situation unharmed.

Learn from the experts how to build a layered survival defense! Click the banner below for more!