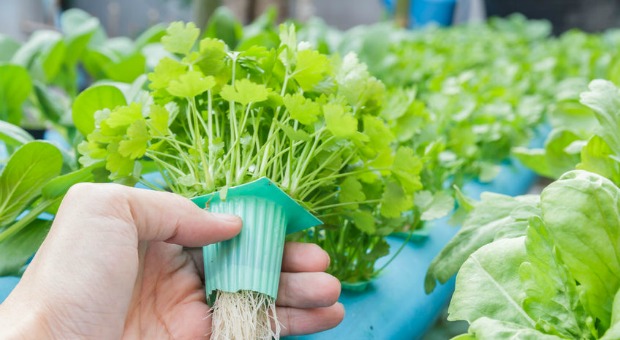 Unless you’ve been living in a cave, you’ve probably heard of hydroponic planting. Even if you did live in a cave, you probably saw an example of it when you saw that little plant growing in a puddle of water in the rock. That’s what hydroponic growing is – it’s simply growing plants without soil.

But why should you try it? That’s what we’re going to talk about today.

When you think about hydroponically growing plants, you probably get this vision of complicated systems and expensive grow lights, but that’s not the case. Growing plants using a hydroponic system is actually easier that using a soil-based system, as you’ll see in a bit.

You can use water alone, gravel, sand, coconut husks, or even artificial materials to secure the roots of your plants, but the idea is to choose a medium that allows the water to flow freely around the roots of the plant.

Here are just a few advantages of growing hydroponic plants.

Studies show that plants grown hydroponically grow 30-50 percent faster than soil-grown plants and also yield more fruit. This is probably because there is a constant supply of water and the nutrients are delivered straight to the roots throughout the day.

Since the plant doesn’t have to search through the soil and break the nutrients down in order to absorb them, it’s free to use that extra energy to grow and produce.

Also, there is generally more oxygen in water than there is in soil. This helps the plant absorb nutrients faster and it also promotes root growth.

Since you’re controlling the medium and you only plant what you want in it, you’re not going to be dealing with weeds, and if you do manage to get a couple weed seeds blown or carried in, they’re easy to pluck out, roots and all.

This saves you time, and prevents the plant from fighting with weeds for nutrients and water.

You Control the Nutrients and pH

One of the biggest problems that we face when we grow plants in dirt is that we’re often at the mercy of the quality of the soil. Without sending it off to be tested, it’s tough to tell what nutrients are in your soil and how acidic it is.

Since some plants prefer a more acidic soil and others prefer neutral or base soil, you’ll find that some plants grow better in your soil than others.

With a hydroponics system, you take all of the guesswork out of the growing process because you control the amount and type of nutrients as well as the pH. This is another reason that plants are healthier and more productive.

You Know What you’re Eating

You really don’t know what’s in your soil even if you’ve lived there for 20 years because pesticides, chemicals, and even acid rain can contaminate it with all sorts of harmful materials. When you grow your plants using the hydroponics method, you know exactly what’s in the food that you eat.

Because there’s no dirt to mess with, hydroponic systems are exceptionally easy to manage indoors or in a greenhouse, which means that you can have fresh produce year-round.

If you get sick of growing tomatoes, just switch them out and grow some basil to go with them. Since your plants will also yield more fruit, you’ll really ramp up your production.

We just mentioned that hydroponic systems are easily adapted to indoor growth, and there is more than one reason why that’s a good thing. First, you don’t have to go out in the rain or heat to tend your plants, or look at a snow-covered, barren garden in the winter.

That’s great, but what about security? If you’re growing plants inside, nobody will know what you’re doing. In hard times, when you’re trying to survive, this can be a deal-changer. And you don’t necessarily need much room for an indoor hydroponics system, either.

Unlike traditional soil growing techniques, hydroponic systems lend themselves nicely to growing in stacked trays. I’ve seen many setups that range in size from the Plug & Farm Towers to ones that consist of 5 or 6 layers of trays that are several feet wide with a couple of feet between each layer.

If you use a gravity system, you can get quite clever with your angles so that each layer trickles down to the next, then is fed back up to the top again. Even using a hydroponics system that large, you’ll still be using very little water in the scheme of things. 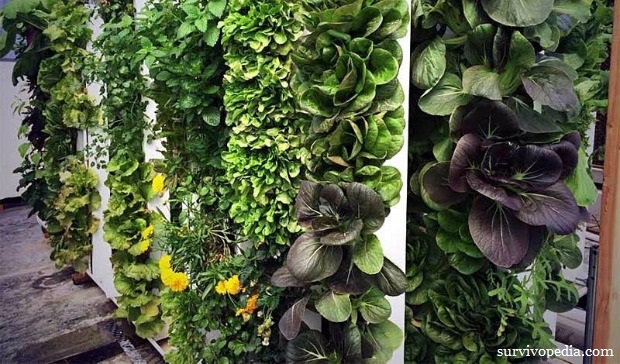 This one sort of goes without saying since you’re not using soil. To drive home the point, though, I live in Florida and the soil is extremely sandy, with just a bit of loam on the top. Tomatoes grow OK here in that, but they’re merely compared to ones that I grew in the rich soil of West Virginia.

However, if I use a hydroponics system, I don’t have to worry about soil quality. If you pair this with an indoor growing system, you can grow pretty much anything.

Any plant needs water because that’s how it absorbs nutrients.

Now, of course we can’t give an exact number here because the US has such a wide variety of soils and rainfall amounts, but in soil that’s not too wet or too dry, and grown in conditions that aren’t miserably hot with low humidity, it will take about 20 gallons of water per week to water a 32 square foot garden. That’s a garden that’s roughly 5 feet x 6 feet.

Now, if you have to water an area that large using a hydroponics system, you’re going to use as little as 1/4 of that. Maybe less if you’re filtering and oxygenating the water, because it’s a re-usable source.

When you’re in a survival situation, that’s a huge difference in the amount of something that you need to live! In essence, that saves you an extra 15 gallons just in the first week, and, even assuming you lose a couple of gallons to evaporation weekly, you’ve still saved at least 40 gallons. That’s enough water for almost two people over a month!

Diseases and Pests are Easier to Get Rid Of

The way that many diseases and pests attack your plants to begin with is via soil. So, since you’re eliminating soil, you’re also eliminating much of the risk of your plants becoming infected. And one of the main reasons that pests and diseases are so hard to get rid of if you DO get them in soil-grown plants is because they hide in the soil and keep reinfecting your plants.

With a hydroponics system, there is no dirt to hold the pest or disease, so they’re easier to get rid of if you are unfortunate enough to contract them in the first place.

Since you’re no longer dependent on soil quality or large land areas, and you can easily use a hydroponics system to grow year-round in a greenhouse or indoors, you can grow basically whatever you want.

You can also experience three or even four growth cycles (depending on what you’re growing), so even if you have a smaller growing area, you can grow one plant this cycle, and another plant the next cycle.

Physically Easier to Grow and Harvest

You can grow your plants at whatever height is comfortable to you – just build your system accordingly. That means that you don’t have to bend over on your hands and knees like you do when growing a traditional garden.

You don’t have to weed the garden, either, at least not on any serious level. If you do need to pick out a few, they pull out easily because their roots aren’t buried in dirt.

Now that you have a few really good reasons to try a hydroponics system to grow your fruits and vegetables, get started! We’ve provided a link to one that we’ve personally tested. It’s efficient, easy to assemble, and simple to use.

It’s also big enough to make a nice wall garden outside, but small enough to use inside even a small apartment.

Now that you know how to grow hydroponic plants, you could learn how to DIY your own portable device for an endless water supply.

Click the banner below and find out how to build your own portable device which provides fresh water 24/7!